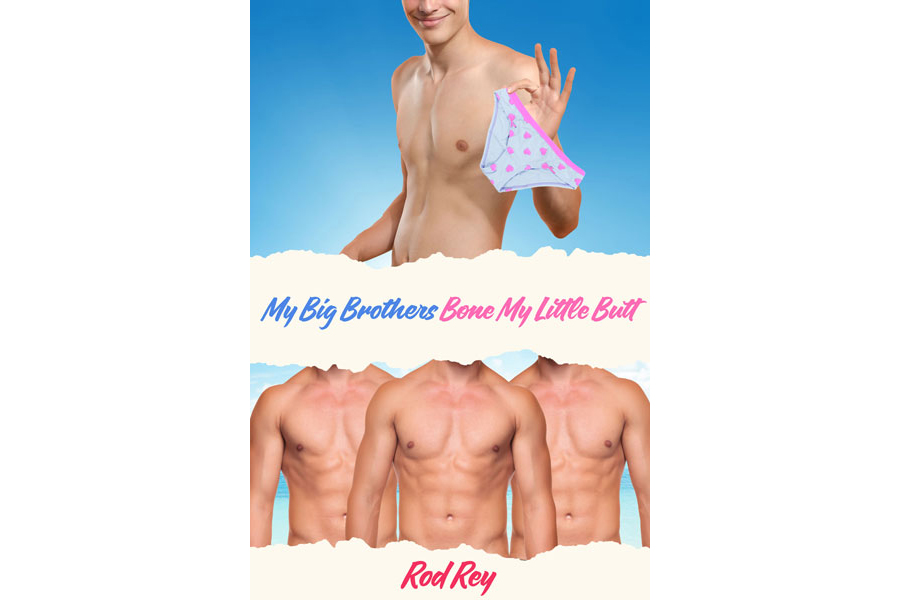 Eighteen-year-old Iggy likes his panties…a little too much. His favorite types are the ones with slits on the back, like the one he’s wearing that’s blue with pink hearts.

He also likes his big brothers who are nineteen-year-old triplets, but he likes them in a way most people don’t like their own brothers. They haven’t always been super close, maybe a little, but definitely not in the way he’d like to them to be.

However, all that’s about to change the moment he walks into his room.

And he may have to keep his panties on for the ride of his life.

My Big Brothers Bone My Little Butt is a 4,000-word short story.

I got inside the house and rushed upstairs to my room, forcing the thought of my new panties inside my mind to avoid getting depressed for the millionth time. Which one should I wear next? There were so many of them! I’d really gone overboard. After all, they came in a huge variety of colors and patterns, so how could I not get all of them? And the ones at the sex shop had slits on the back for “special” purposes.

As I entered my room, I stopped in shock and accidentally dropped my bags on the floor. My big brothers relaxed on my bed, completely naked and stroking their big cocks while smirking at me. They were tall, identical triplets who looked like typical blue-eyed-blond beach boys: captivating bedroom eyes; full, kissable lips; smooth, buff bodies with defined abs; tasty, pink nipples; and sexy summer tans. I, on the other hand, was the anomaly with brown hair, brown eyes, no tan, and a smooth, bony body. A twink, basically. I was eighteen, and they were nineteen.

I scoffed. “What are you guys doing in my room? And on my bed?” My annoyance wasn’t genuine because my cocklet started growing into a tent that poked through the front of my shorts, full of hope and anticipation.

“Seems like you wanted this all along, Iggy,” said Ian. He was about five minutes older than the other two. He lay on the side to my left. The three of them were butch with deep voices, never failing to turn me on so much. My voice was softer and more feminine.

“Of course, he did,” said Ike, the middle triplet. He lay in the middle.

“Those sexy panties with holes on the back aren’t a coincidence,” said Ivan, the youngest triplet. He lay on the other side.

I lowered my eyebrows. “You snooped through my stuff?”

“We’re your big bros,” Ian said. “We’re the bosses here, so we do whatever we want.”