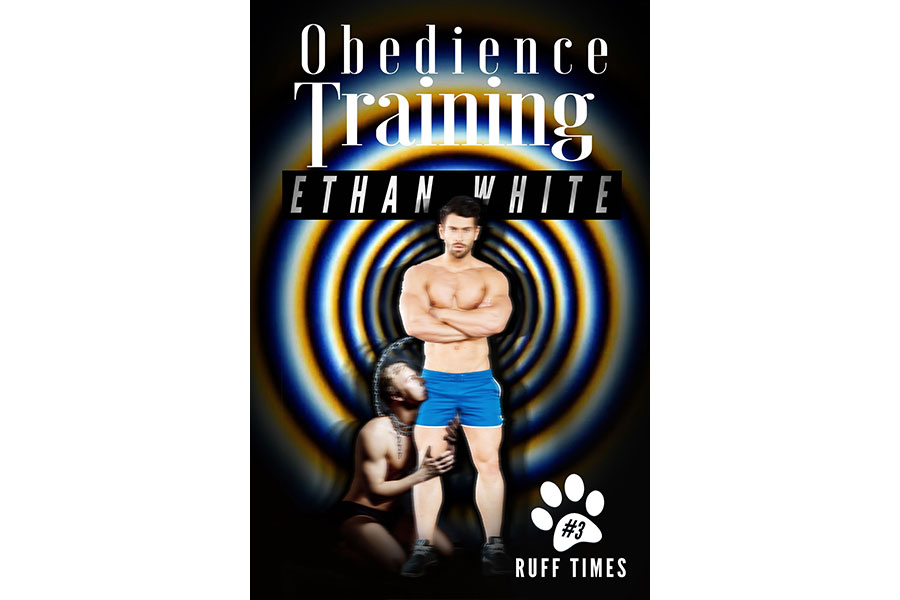 “Such a good boy for me…” Adrian murmured, keeping his voice as soft and melodic as he could to ease Simon back into a state of trance. A tinge of faint pink blossomed in Simon’s cheeks, but the tips of his ears were bright red. He was panting, breathing heavily, his chest rising and falling as Adrian watched him closely.

Simon was so cute. But his posture on all fours was atrocious. They would have to work on it later. For now, though, there were a few more things to take care of. “Why don’t you get back on the couch, Simon?” said Adrian. “I’m not done with you yet and it would be so much easier for you to go into trance while you’re sitting on something nice and soft and comfortable.”

Adrian stroked the side of Simon’s face with his thumb once Simon had clambered back up onto the couch. His cock twitched as Simon leaned into his touch. Gods. He wanted to ravage his new pup more than anything, but his desires could wait. Needed to wait. Right now was about Simon and letting him slip as organically as possible into his pup persona.

That didn’t mean that Adrian couldn’t spend a few minutes admiring his subject. “I want you to sleep for me for a little bit, Simon,” he said, leaning forward to whisper the trigger words into Simon’s ear. “I want you to sleep and just let my words and triggers filter into your subconscious where I, and only I, can remove them. Do you understand me?”

Simon nodded. He sighed quietly as a small smiled curled the corners of his lips. Adrian couldn’t resist drawing his thumb across Simon’s lips, feeling a sudden rush of warmth to his cheeks as Simon kissed his finger.

Sighing through his nose, Adrian threaded his fingers through the dark locks of Simon’s hair and marveled at how soft they were. The sensation of those strands slipping like silk through his fingers made him shiver with pleasure and made his cock twitch. The towel fastened around his waist was tented out almost obscenely, but no matter how much the coarse fabric stimulated his sensitive cockhead, he ignored his raging erection.

He supposed he could have gone to find a change of clothes after Simon signed the agreement, but truth be told he had been caught up in the excitement of it all. His lips still tingled at the memory of the sizzling kiss he and Simon had shared on the couch before he put Simon under. It didn’t make much sense to get dressed now, though.

Adrian had Simon fully under his power now. If he was so inclined, he was pretty sure that he could do whatever he wanted to the boy. Simon was incredibly susceptible, after all.

Having someone under his thumb, controlling someone’s mind and body, had always been one of Adrian’s deepest, darkest fantasies. A human being reduced to nothing but a playful little pup never failed to make him come during lonelier nights.

But there was a line that he had to draw between fantasy and reality. He could jerk off all he wanted to, slowly stripping away Simon’s human thoughts and memories, leaving the boy permanently in a state of pupped-out trance, but he couldn’t do that. Shouldn’t do that. Didn’t want to do that.

While imagining taking full control of Simon was hot, the thought of actually doing it was reprehensible to Adrian. The thought of doing it to Simon especially, made his stomach turn.

“Adorably dorky” was the first thing that Adrian had thought the moment that he saw Simon trying to pick up some schmuck with trivia about Canadian currency, of all things. The poor guy must have known that the guy he’d approached was only looking for a free drink and a quick fuck. While he definitely thought that Simon deserved more than he got, he was glad that the guy hadn’t taken Simon up.

Simon’s Canadian money schtick had been funny and cute. But most of all, it had been interesting. It had shown Adrian that, at least, Simon wasn’t like all the others. And that that was probably a good thing.

He couldn’t have known that Simon was interested in hypnosis, deep down. Or that Simon had been looking at his ad as a way to get out of a difficult financial situation. But it was funny how the universe had conspired to shove them together. He didn’t think he had ever been more glad for something so serendipitous.

Adrian sat down on the coffee table across from where Simon was sitting on the couch. He traced his fingers along his own bare chest and tweaked a nipple. The brief shock of pleasure that coursed through him as a result made his cock jump. Fuck. Seeing Simon so vulnerable turned him on so much.

Adrian lowered his hands to the rolled-up part of the towel around his waist and unfurled it. He let the two ends fall to either side of him and groaned as his cock sprang free. The cool air felt intense against the sensitive skin of his cock.

A clear drop of pre-cum beaded at the tip of his member. “Gods…” he grunted, rubbing the back of his glans with the pad of his thumb. His toes curled at the intensity of the sensation and he could scarcely resist the urge to whimper.

He wrapped his fingers around his hard cock, his shaft feeling hot in his palm. He gave himself a squeeze and moaned quietly as he moved his hand up and down his hardness. Every now and again he twisted his grip, enjoying the extra friction.

He closed his eyes and imagined Simon’s lips locked around his cock, plying him gently, engulfing him in that delicious warm wetness. He breathed heavily, pumping his cock harder and faster with every stroke. He tossed his head back as a guttural moan tore itself from his throat. Pleasure built inside him, a knot of tension in the pit of his stomach, concentrating just below his navel.

His abs tensed. His toes curled against the floor. He stroked faster. Up and down. Up and down. Each breath brought him closer and closer to plunging right off the edge, but at the last moment, with all his willpower he heaved his hand off his cock.

Taking a few more moments to cool off, Adrian forced himself back up to his feet. He walked over to the couch and took a seat next to Simon. He reached up and brushed a stray lock of hair behind Simon’s ear and took a deep breath to center himself.

“Simon?” he said, his voice cracking from the effort of keeping it steady. “Simon, are you here with me?” Simon murmured something unintelligible, his eyes remaining closed as he nodded. Adrian smiled. “Good boy…” he cooed. “Such a good boy for me.”

Adrian brushed his thumb along Simon’s cheek. “Now,” he said, wrestling his voice into as soft and even a tone as he could manage, “I want you to stay in this trance state for me for a little bit, Simon.”

“Okay,” Simon whispered, as a small smile lingered on his lips.

“I understand, Adrian,” said Simon. Since Simon had already had an orgasm earlier, when Adrian had put him under trance right after signing the agreement, he was soft. Nevertheless, his cock twitched and swelled back to half-hardness as he spoke.

Simon’s arousal turned Adrian on. More than he could have ever anticipated. He sucked in a deep breath, ignoring the pulsing need in his own groin as he said, “Whenever I, and only I, use the words ‘pup time for Simon,’ even if you’re alert and awake, as long as you’re in a private place or somewhere you know that you can be safe, you’ll return to this state of deep trance.”

“Whenever I, and only I, use the words ‘pup time for Simon,’ you will put away your human self and bring out your puppy self. Do you understand?” said Adrian, tracing his finger around the base of Simon’s neck, where a collar would rest if Simon actually had one.

“Yes, Adrian,” said Simon, the tinge of pink on his cheeks getting deeper. “I understand… Whenever I hear you say ‘pup time for Simon,’ I’ll put away all my human thoughts and memories and worries and just relax … I’ll put on my collar to be your pup…”

Simon seemed a tad more lucid and cogent than Adrian expected, but he liked it. He patted Simon on the head and said, “Good boy … that’s a good boy…” He delighted in the way that the words elicited a quiet moan from Simon. That Simon obviously had a bit of a praise kink was something that Adrian looked forward to exploiting.

After a few moments of silence, Adrian said, “Do you think that it’s appropriate for a pup to be using human words?” Simon seemed to think on it for a moment, eyebrows drawing together. Then, he shook his head.

“No?” said Adrian. Simon nodded. “Good boy!” he said, relishing the way that Simon’s cheeks glowed at the praise. “Of course not. Human words are for humans. Not for pups. And right now you’re not a human, right. You’ve put away your human self. So right now you’re just a pup. And right now, you probably shouldn’t be using human words.

“So what do pups use instead of human words?” said Adrian. Simon let out an adorable little yip that sent a wave of warm tingles fluttering across Adrian’s chest. He was just so cute. “That’s right, pup! Pups bark! And yip. And whimper. And whine. And howl!”

A little excitement slipped into Adrian’s voice and Simon picked up on it. He threw his head back, let out a quiet howl, and wiggled his butt on the couch in a way that was so cute Adrian couldn’t help but laugh at the sight. “Good boy,” he cooed. “Such a good boy for me…” A sizable drop of pre-cum rolled down the underside of Simon’s eager and hard cock at the praise.

The playful expression on Simon’s face faded as his jaw went slack. His wiggling went still. His arms and shoulders rolled back as his entire body slowly went limp and he slipped deeper into trance. “Good boy,” said Adrian, his voice barely louder than a whisper.

If dad/son incest is your secret kink, this mega-bundle has 16 taboo tales just for you!