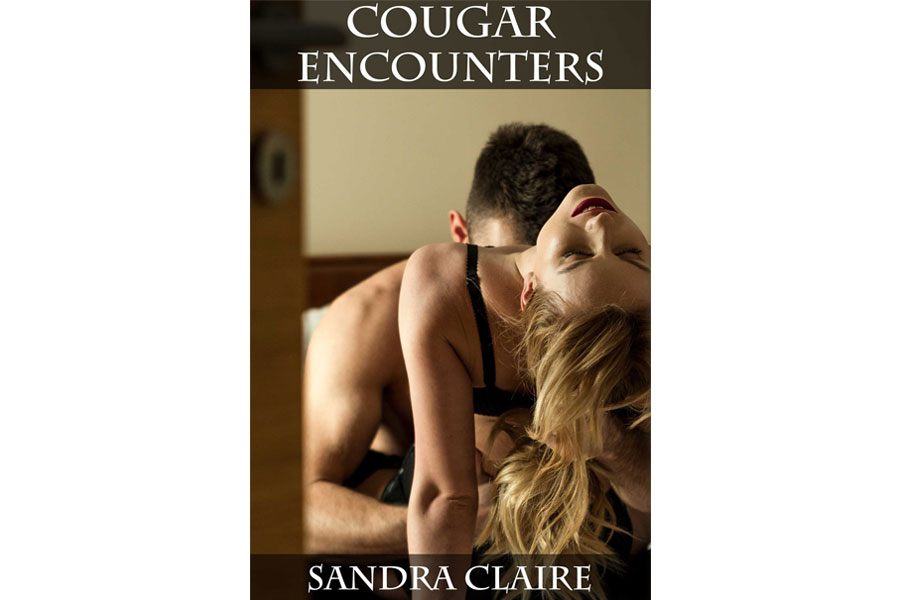 This hot and seductive bundle collects all five of Sandra Claire’s cougar stories. Each raunchy story follows the sexy romps of older women on the prowl for masculine and muscular younger men and shows that mature women are really what those young jocks crave.

Included in this volume are:
COUGAR ON THE PROWL: Single mom Susan is lusting after her son’s best friend and decides to embark on a risky plan to seduce the younger man.
COUGAR IN HEAT: Jesse expects his friend’s mom, Melissa, to be a buzzkill when she joins him and the guys on a ski trip, acting as a chaperone. But then she shows up naked in the sauna.
COUGAR ON PATROL: Stuck in a dead-end job and eternally single, Rachel risks it all in pursuit of the young man who’s working late in the office.
COUGAR’S CATCH: Nancy’s car breaks down on a lonely highway. When the hot young tow truck driver shows up to the rescue, her already-high libido kicks into overdrive.
COUGAR ON THE HUNT: Julian’s heard all the rumors about naughty Samantha, the cougar who works out at the college gym. Tonight, he discovers the rumors are true.

WARNING: This 21,000-word short story collection contains multiple explicit sex scenes between younger men and the mature women who crave them and will get you hot and bothered, and is intended for mature adults only.

He started up the truck and we put on our seatbelts. The radio came on and quietly played a country song. He put his left hand on the steering wheel, shifted into drive, and then put his right arm over the top of the seats, casually turning toward me as he drove. I could see his armpit hair through the sleeve of his shirt—there was nothing hotter than a hairy man.

“I’m Bobby,” he said, “I should’ve introduced myself earlier.”

“I’m Nancy. Thanks again for coming to my rescue.” I tried to force my gaze onto the road as we drove, but instead I couldn’t keep my eyes off him, off his strong neck and shoulders, the compact muscle beneath his sweat-soaked shirt, and, if I wasn’t imagining things, the bulge at the fly of his jeans.

“Ain’t no trouble. Especially for a pretty woman like you,” he said.

I looked down at his bulge—which he was still massaging—and found it had grown considerably. Bobby had to be huge down there.

I knew I shouldn’t go forward with this, but I just needed sex so badly and Bobby seemed to want it, too. Even if this just ended in me giving him a little road head, it might be enough to sate my desires until I could properly take care of myself.

He slipped his hand under the waist of his jeans and groped himself. I lifted my skirt up to my hips, exposing my black lace panties to him, and slipped my fingers under my underwear. I ran my fingers along the length of my folds, my fingers already wet from my moist pussy.

The truck jerked a bit as he tried to straighten his driving, but his eyes were almost entirely on me. I’ve never felt so emboldened, so brazen. I grabbed my skirt and panties and pulled them down to my ankles, and then kicked them off. I bit my lip nervously and sat back in the seat, waiting to see what Bobby would say or do.

Don't want the bundle? Here are the individual ebooks...