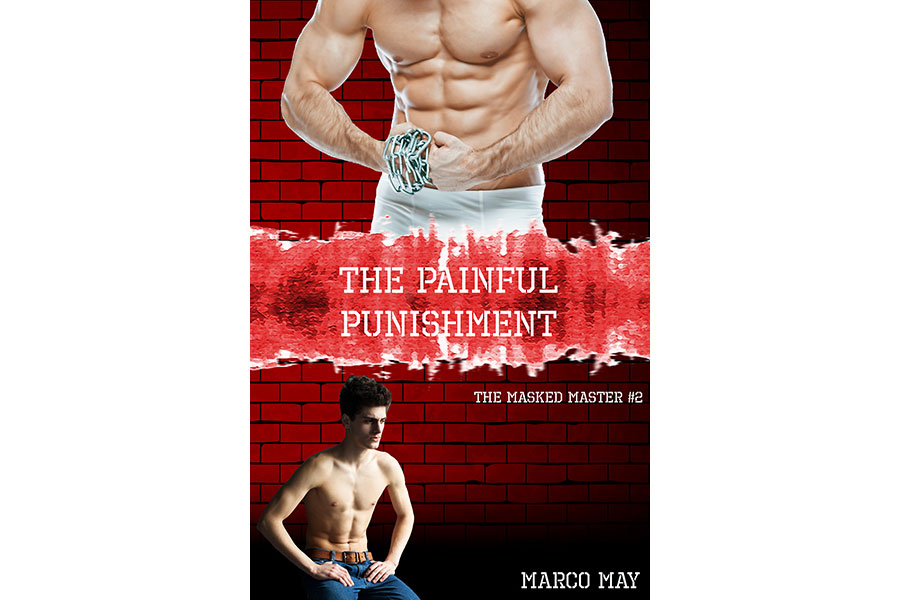 Adrian gained a little experience with Sir by putting his mouth to use beyond finally being kissed for the first time. It’s still the same night they met, and by now, Adrian has agreed to submit to Sir. That includes being punished for lying about being an inexperienced virgin. After all, a bad little boy needs to learn his lesson.

Adrian knows all too well that if he doesn’t go through with the punishment, he’ll have to cut ties with Sir forever. Adrian doesn’t want that. Tired of being a virgin, he soon learns that he no longer has a choice but to withstand whatever punishment comes his way just to gain the experience he wants.

The two of them are now in Sir’s lit basement after being in the pitch-dark living room. This is where all the action continues. But just because it’s no longer dark doesn’t mean Adrian gets to see Sir’s face. Nope, he hasn’t earned that privilege yet.

But Adrian starts learning more about this supposed no-strings hookup the longer he’s around Sir. That includes seeing a new side of Sir that’s as mysterious and intriguing as his masked face. What is Sir hiding? Is he hiding anything? Why is Adrian suddenly more drawn to Sir than he ever thought he’d be? It’s not even supposed to go beyond one night, just like they agreed when they came across each other online.

But given Adrian’s virginity, could this one-time hookup actually lead to a second time?

The Painful Punishment is a 4,400-word short story and part two of a five-part series.

This Monday night, Sir carried me over his muscled shoulder, and he headed across the pitch-dark living room of his suburban bungalow and stopped at a door. I only knew it was a door because of the sound of it opening. He flicked a light switch on and marched downstairs to what I presumed was the basement. What else could be below ground?

The brick-walled basement was bright and caused me to squint from having been in the dark for too long. He took a few more steps and stopped, letting me off his shoulder and laying me face down on what looked like a big swing made of leather.

“Stay put.” His deep and butch voice threatened to erect me, sexier than my dull, medium-pitch one with the occasional crack.

I swallowed because of having no idea what his plans were. There was probably nothing vanilla about what I was going to experience. It both frightened and excited me.

I rested on my flat belly and tried to turn my head to take a glimpse of him, but he gently pushed my head back forward as if stopping me from seeing his face.

“Don’t you dare look at my face, Adrian!” Why had he raised his voice? Was he mad? And Adrian? He’d only called me by my name the first time he’d seen me, and he’d called me “boy” ever since.

He seemed to have calmed down. “In due time.” His tone was back to normal, at least, which still intimidated me.

But he’d said I would, hadn’t he? I wasn’t sure what to feel about that. On one hand, the mystery was what intrigued me in the first place. The only thing I could tell was that he was a white man because of a quick peek at his hands. Plus, his voice sounded like he was, even though race didn’t matter to me. On the other hand, I really wanted to know because I hated surprises other than birthday and Christmas presents. I wanted to know whether I could be sexually attracted to him.

I heard him doing something from feet away, as if slipping a few things on, but I couldn’t tell what was going on.

I did as told from the mere desperation of wanting to see Sir, finally. Wow! He was huge in a Hulk sort of way, definitely well above six feet. He had to have worked out every single day to maintain a body like that, especially for being forty-eight. He had no body hair like I’d figured from feeling his body upstairs, just a bit on his limbs and a trimmed, brown bush for his pubic hair. Unfortunately, I couldn’t see his face because he had on a black mask with tiny spikes decorated all over it, leaving just his seemingly-hazel eyes and sexy mouth visible like a masked Master. It matched his leather boots that also had tiny spikes for decoration. His erect cock was the next thing I witnessed, which was leaking into a stringy mess and hanging stickily from his piss slit. It stuck out of a fitted hole as part of some kind of fetish underwear in black and made of mesh. My eyes glared at such a sight. It was a monster! How would I ever take him with a size like that?!

“Once I punish you and teach you how to be a good boy again, you’ll eventually get to see my face as a reward. That’s a promise in exchange of your promise to me that you’ll never tell anyone about it.”

“Y-yes, Sir.” What choice did I have at this point? I’d consented to everything, even though I hadn’t known what I’d consented to. As scary as it continued to be, I was still intrigued. For some reason, I didn’t want to leave just yet. My fast-beating heart kind of said otherwise, but my cock said something else entirely.

Sir walked to a section of the wall nearby where an assortment of chains, ropes, floggers, and paddles hung in an organized order. He stopped and eyed me again. “You get a choice for your punishment. Pick any one you’d like.”