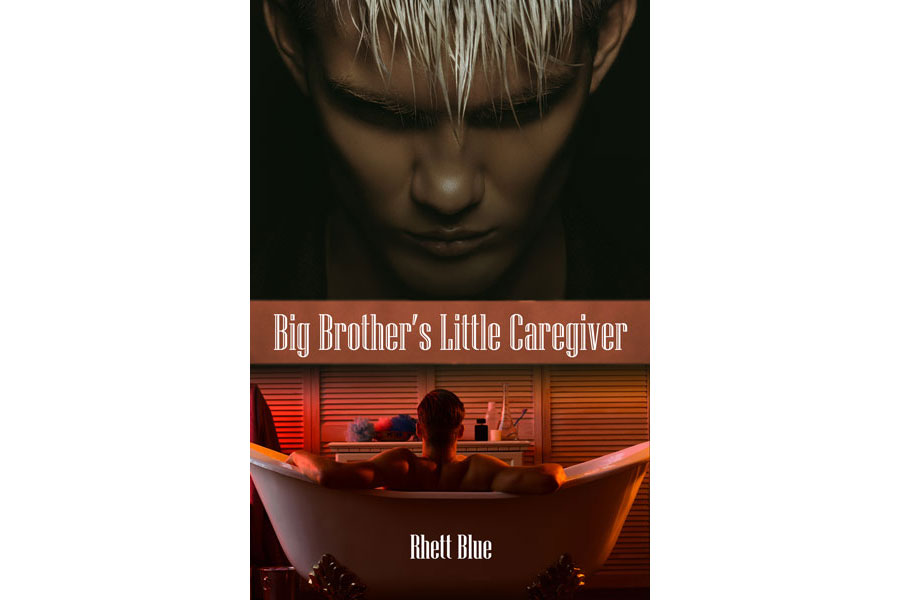 Born from a family whose attractive genes didn't quite pass onto him, Alvyn often feels like the odd ugly duckling. It doesn't help that he's short and thin with pointed ears, a pointy face, and erect eyebrows, like the little elf his mean mother often calls him.

Alvyn still has one huge supporter in his life: Hans, his big brother. They don't just love each other like real family, but they're there for one another through thick and thin. While Hans gives Alvyn all the love and attention he needs, Alvyn looks after him as his little caregiver because of an accident that left Hans confined to a wheelchair.

Alvyn finally takes caregiving to a whole new level when he unintentionally wakes something up in Hans while giving him a bath. And that's just the beginning of the kind of brotherhood they never knew they could have.

Bringing them even closer than ever.

I pushed Hans on his wheelchair into the spacious bathroom. He was able to walk a bit since he’d been slowly improving after the accident, but it still hurt him. So, we saved the bit of walking he did do for minor stuff that required short steps, like bath time. I pulled off his yellow T-shirt that smelled like body odor. As usual, I struggled but managed to take off his gray jogging pants and blue boxers. The white gym socks were easy, albeit just as smelly.

I made a scrunchy face, especially because of the funk that mostly came from his big penis. I only knew what it was called because he’d secretly told me earlier this summer, since Mama wanted to keep sheltering me like a little kid even at eighteen. She made sure I wouldn’t learn any adult stuff online. Many kids my age had already known about stuff from the internet, making me feel completely left out. Mama had even opted me out of health class. So, I had to learn things on my own in the most limited way. I didn’t know a whole lot, but that was partly why I liked Hans so much. He was able to teach me stuff to prepare for whatever adulthood had in store for me, especially since college was practically around the corner.

He sighed. “Sorry, Alvyn, Mama forgot to bathe me yesterday.”

I frowned. “Why?” Ugh, my voice was a little squeaky at times, and just weird. Hans told me it meant I was going through a delayed puberty, much later than most boys because of my slower development. It was yet another thing Mama never talked to me about.

“Because she’s too busy living her own life, always spending my money at the mall with her friends, clubbing and partying, things like that.”

“Oh.” I knew Hans had a lot of money saved up from an inheritance on Papa’s side of the family, but I didn’t know Mama always spent it since she worked as a secretary for some office in the big city. No wonder she liked to shop a lot. Our big farmhouse out in the country had modern stuff inside, way nicer than the tiny mobile home we used to live in. Well, Papa still lived there as a recluse, probably still smoking and drinking beer with the teen girl he’d cheated on Mama with. That girl always called him Daddy. Why?

After filling up the bathtub, I helped Hans off the wheelchair. I wished I had a body like his. He used to go to the gym before the accident, but he still did minimal exercises whenever he could. He was smooth everywhere too. Well, he had a thick, brown bush, unlike my blond fuzz that barely grew down there.

It was a struggle to get Hans inside the tub, especially because his hands were bandage-wrapped and sore, but I did it. Then, I grabbed the small bucket and poured water over his body while he relaxed.

“Thanks for doing this, Alvyn, even though you don’t have to.”

“But I want to, Hans. You’re my big brother, and I care about you. And it’s not like I haven’t done it before. Besides, you’re kind of stinky, so you need a bath.”

He sighed. “You’re always so good to me.”

My heart tickled and felt melty. I gave him a wide smile.

“Make sure you use the rag when you clean my butt, okay? Not the sponge.”

I nodded. “I know.” After all, he couldn’t do certain things well on his own. “So, why doesn’t Mama remember to bathe you every day?”

Hans sighed. “I annoy her with my presence. She just, you know, finds me to be a pest in the way of her ‘fun life’ as she puts it. She works hard and wants to unwind, I guess.”

“Oh.” I grabbed the bottle of bodywash and the mesh sponge. “Can I take care of you full-time from now on?”

Hans gave me a happy smile. “As much as I’d love that, you’re starting school again soon. You’ll be real busy.”

“So? I can make time for you too. I’m homeschooled, remember? And homework is usually easy, anyway. I always get it done fast.”

“I know. That’s because you’re smart.”

My heart tickled again, and I made another wide smile. I washed every part of Hans’ body with the sponge, using the rag for his butt and then washing that too (for obvious reasons). But this time, I decided to wash his penis more than before since he’d told me the other times I didn’t have to do it too much. Maybe that was why it smelled bad? Maybe it needed better washing?

I wrapped my small hand around Hans’ penis and lathered it up with soap, the water gently splashing against my fist. Would mine keep growing now that I wasn’t a kid anymore? It was bigger than it used to be, but it still wasn’t big like his.