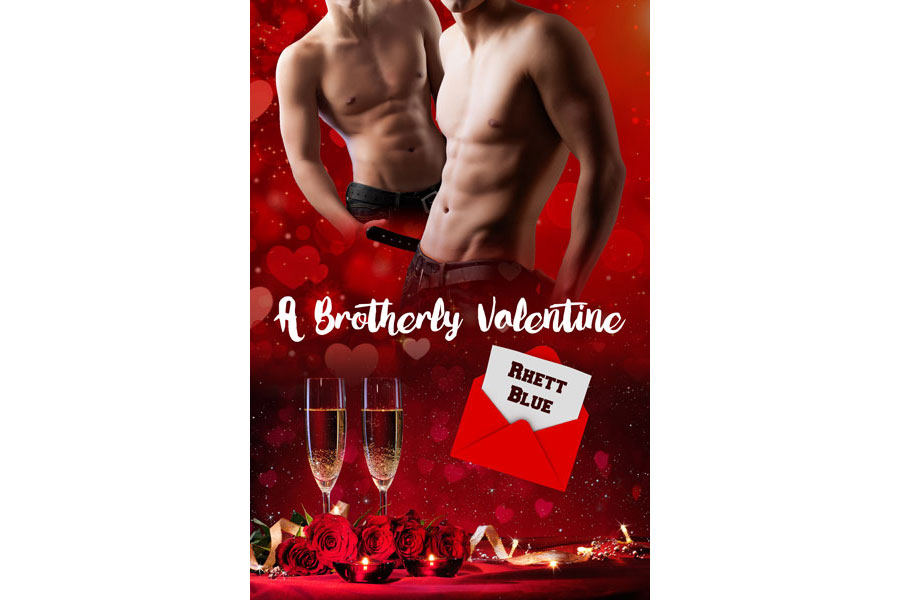 Eighteen-year-old Adam plans to lose his virginity on Valentine's Day.

His anonymous hookup, V, is a fellow virgin who sounds like the perfect match, even though he has no idea what he looks like. The thing that makes them both compatible? They have forbidden feelings for their brothers.

With the big day here and the house to himself, V comes over. While he’ll never live up to the perfection that is Aaron, Adam’s twin brother, this is still destined to be a hot encounter.

But what starts as hot soon turns scorching as V reveals himself and Adam’s hookup turns into the biggest, sweetest, and sexiest surprise of his life.

And a taboo one that no one can ever know about.

A Brotherly Valentine is a 6,200-word short story.

The moonlight shone through the only window in my room, but it wasn’t enough to make out a face or body, more like a silhouette. The only sound in this big house was my portable heater nearby, my protection against the subzero temperature outside as the snow continued to pile.

Naked with just black gym socks on, I relaxed on my small bed and waited for V, my mysterious Valentine hookup to coincide with the famous love day of the calendar year. It was the perfect day to lose our virginities on, even if there wouldn’t be any romance involved like I would have preferred. But if that was the case, why had V insisted on me decorating the dining table with Valentine’s Day stuff? Wasn’t a hookup supposed to be just that…a hookup?

Thankfully, V and I had no problem with refusing to show our faces or give each other our real names. I went by A for Adam, and I assumed V was his initial. We’d met on Hawt Brothr, a social app for men and women with a brother fetish. We’d chatted for two weeks before finally agreeing to hook up, and only he got to see a pic of my chest, while I hadn’t gotten to see any pic of him.

We were both deep inside the closet, so we had to be careful. I knew for a fact that my parents—especially Dad—would kick me out of the house. I mean, it’d be legal for them to do it since it was technically their house, and therefore, their rules, and I was now eighteen. We lived in a small conservative town in northern America, so, yeah. It just wasn’t worth taking that risk. Given that V was around my age, it was probably the same for him.

It was why I had waited until Mom and Dad left for the weekend, something they often did because of their love for traveling. They had a comfy RV, so why not? My twin brother, Aaron, had gone with them as the perfect distraction to what would’ve been a day to celebrate with his ex-girlfriend, and Mom and Dad had promised not to make the holiday a big deal for his sake. I just hoped his heart would heal soon; his ex had recently broken up with him for a “better” guy.

Pfft, better. Yeah, whatever. Aaron was amazing, and his ex was too blind to see it. I mean, I would know. We hadn’t just grown up together; we were very close as identical twins. Not only did we share the same birthday, but we had plenty of similar interests because we could relate more. As a result, we were inseparable and told each other almost everything. The exception to the latter? My sexuality, and it was only because I feared losing him forever.

What I’d give just to have Aaron all to myself, though. Who cared if I was considered a sick person by our society for being in love and in lust with my own brother? So was V! No wonder we had connected so well—a bit too naturally, in fact.

So, what did V look like? There was a strong chance I’d never see his face even after we had sex tonight. I was tall, athletic, and smooth with a nice bubble butt, and I had reddish-brown hair and greenish-brown eyes. Aaron obviously looked just like me, so aside from our different personalities, we had the same luck just by our looks alone. The only reason I hadn’t gotten laid yet like he had was because being gay around here was hard enough.

Meeting V, who happened to live nearby, was practically a jackpot. But was V attractive enough to mess around with? Not that I would even see his face, but his body at least? He had promised I’d like the way he looked, so I was hopeful. I knew I couldn’t be too picky, given my inconvenient location, but come on now. I do have limits.

The sound of the front door opening sped up my heartbeat with a nervous kind of excitement. V was here, and it now sounded like he was taking off his coat and snow boots. He would enter my room in just seconds. I had left the door open so that I could wait for him in bed and have him take advantage of me. Besides, with it being safe out here in the country, no one locked their front doors.

I couldn’t believe I was doing this. I had tried meeting two other hookups recently but chickened out. Tonight, I promised not to do that. Third time’s a charm, right? Maybe?

Now, I was fully hard, leaking more than I’d realized for being nervous. The mystery was kind of a turn on, but I did pray that V had a decent body at the very least. Even if he turned out to be unattractive in the face, my moonlit room would practically be a bag-over-the-head convenience to make sex more tolerable. Then again, what was sex even like?

My door opened all the way since it hadn’t been completely shut. And there he was, V’s silhouette that confirmed he had a hot body like mine—kind of similar, actually. I furrowed my eyebrows. Wait a minute! I’d forgotten to tell him where my room was! How had he found it with no problem?