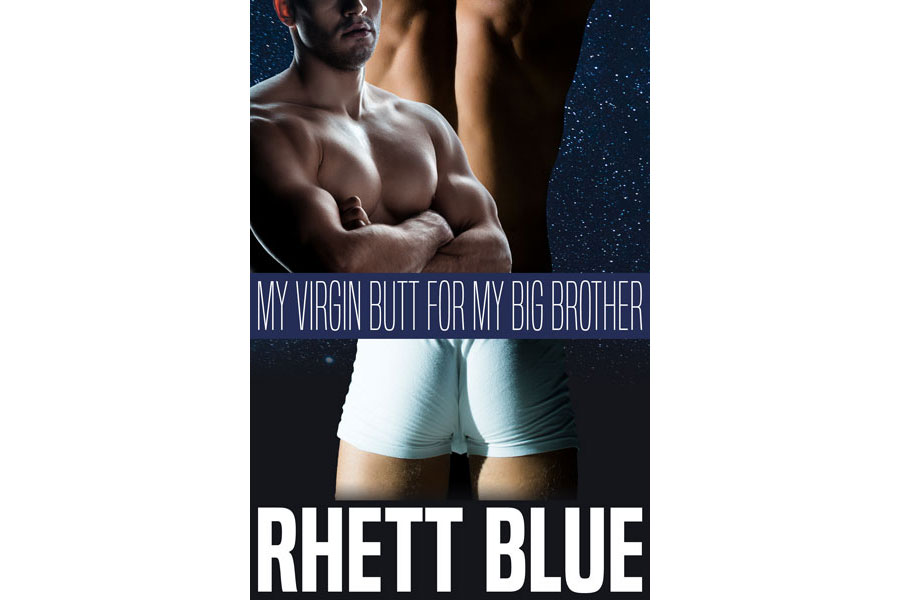 Eighteen-year-old Mikey loves his big brother Kev…more than most brothers love each other. They’ve grown so close, romantically close, sexually close. They’ve committed to each other. But they have to keep this love a secret forever because their love is forbidden, no matter how perfect it is.

Tonight is a special night. Mikey wants to give Kev something he’s never been able to do before…but now he’s finally ready. With Kev being a total top, Mikey is left to be the bottom, and tonight he wants to go for it. He’ll give up his virgin butt as a way to strengthen their brotherly bond even more, to help them become one.

But no amount of willingness on Mikey’s part makes up for just how big Kev is.

Can Mikey be a good little brother and take it like a champ?

My Virgin Butt for My Big Brother is a 1,700-word short story.

Up on the wide balcony, Kev and I were on the cushioned lounge chair, naked except for our white gym socks on and our boxers on the wooden floor. The summer night breeze cooled our damp skin, feeling more comfortable for me than what we were doing right now. It was special, though, and I promised myself I’d take it like a champ just to have this meaningful milestone.

I grunted from the pain, feeling full inside. Finally, Kev was all the way in as soon as my small bubble butt rested against his beefy lap. The few hairs on his inner thighs tickled my smooth cheeks. His hot, scruffy face looked bluish from the moonlight shining above. All I needed for reassurance was to keep gazing into his soft, brown eyes that locked with my similar brown ones, like being lent a big hand to climb up a mountain.

I was spoiled with so much brotherly affection, but it was more than just that. We loved each other like brothers weren’t supposed to, a forbidden love. But our hearts and bodies were too blind to see it any other way. Why did it have to be considered so taboo? Kev was nineteen in college, and I was eighteen in high school. We were consenting adults who knew exactly what we wanted. So, really, why was it wrong when it felt right to us?

Thus, here we were in secret, playing with fire because our nosy neighbors could easily peek through their windows, even though no one was usually up this late at night. Our two little sisters were deep asleep in our shared bedroom right next to us, a bunk bed for them and a bunk bed for us bros. We lived in a crowded three-bedroom house in the suburbs, with our grandparents taking the third room.

“You okay, Mikey?” Kev whispered, playing with my finger-length hair that was as brown as his army cut. As my big brother, he was always considerate of my feelings because of his protective nature he’d inherited from Dad, in contrast to my occasional meekness from Mom. We were a traditional family, even though the two sons of the bunch were doing untraditional things.

I gave Kev a quick nod and a tight smile. “Does it always hurt like this?”

“I don’t know. I’ve, you know, never bottomed before, obviously.” His cheeks flushed a bit from even mentioning that concept.

He frowned. “You’re not enjoying this, huh?”

“I want to, Kev, I do! I swear I’m trying to because I don’t want you out of me just yet. I know I can take it.” Could I? Of course! We were making love, and this was a huge part of it that would happen from now on.

A warm smile of emotions spanned Kev’s full lips. “I can’t believe it. You’re actually giving me your virginity, Mikey. Means more to me than you know.”