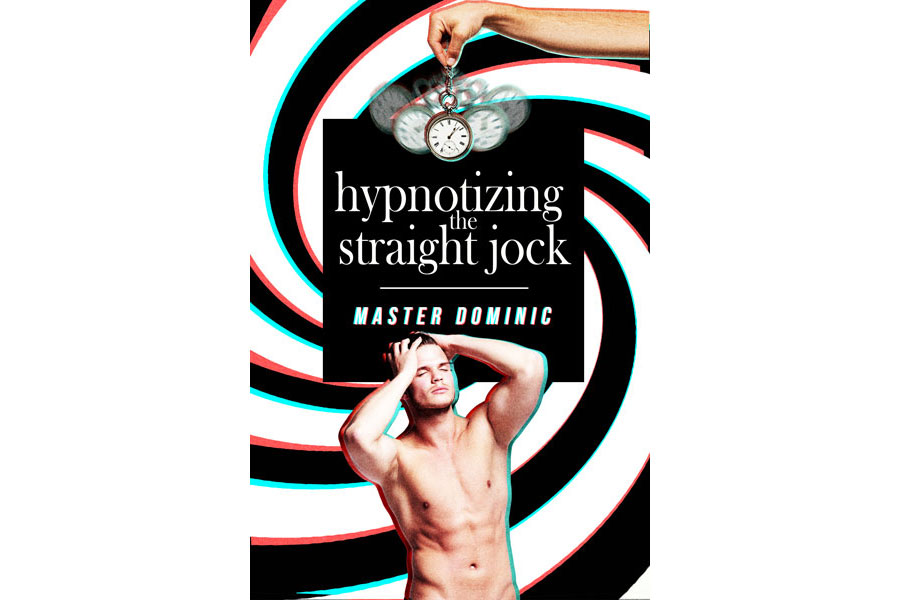 Chad wants revenge on the homophobic bully at college and he devises the perfect way to carry it out. Richard, the bully, lives in the room next door in the college dorms — there’s just a wall between the two of them — and every night Chad pulls up a hypno file on his computer and presses the speakers against the wall. When Richard finally confronts him again and is about to do something violent, Chad utters one simple word that has Richard frozen and mindless — and with a second word, Richard turns into an insatiable bottom.

Hypnotizing the Straight Jock is a 3,700-word short story.

I catch a strong hint of nervousness in my friend’s voice. I look across the change room to where he’s doing his best not to stare, but still being obvious about it.

Richard saunters into the locker area from the showers, naked except for the goggles around his neck and his skimpy Speedo. Richard is the resident bully here at college — the jock who thinks he’s better than everyone for the simple fact that he’s a jock.

And what a jock he is. Though I detest the man, I take in his glorious body. His pecs are defined, his arms are corded with muscle, his abs are tight like a washboard, his legs are powerful, and that ass … that ass is divine. But I force myself to tear my eyes away. Richard is also a raging homophobe — and he knows that Alex and I are gay.

I quickly drop my pants, doing my best to change into my swim gear as fast as Alex is doing, hopefully fast enough that we can escape before Richard has a chance to utter a single epithet in our direction.

“Have you ever wanted to get back at him?” I murmur at Alex.

“I’ve been working on something. You know Alex’s dorm is next to mine, right? His bed is on the other side of the wall between us. Well, when he’s sleeping, I’ve been pressing my computer speakers against the wall—”

“Hey! Faggots!” Richard shouts at us and immediately starts walking our way. His face is contorted with both anger at who we are and glee at the torture he plans to put us through. “Who let you cocksuckers in here?”

“Let’s just go,” Alex says, grabbing his pants to pull them on over his swim shorts.

“No,” I say. I keep my eyes on Richard as he approaches, but in my peripheral vision, I can see Alex hesitate, unsure if he should keep getting changed or follow along with me. “You got a problem with us, Richard?”

Alex lets out a gasp, seemingly stunned that I would confront the bully like this.

“Fucking right I’ve got a problem, fag. I don’t want you pussies getting boned up for me. You should just go fuck each other and stay away from the pool. Seeing you here makes me want to fucking mess you up.” Richard’s words are laced with that same mix of anger and glee.

I don’t think he would actually hit us or harm us. I think he just likes intimidating others and we’re easy targets for his fragile ego.

But this is it — this is the moment I test if my weeks of careful planning and work have been successful. I take a deep breath and wait until Richard comes within spitting distance. God, he’s a gorgeous man. Seeing him this naked and this close is causing all the blood to drain from my head and gather in my dick. I need to keep my wits about me.

“You got something you wanna say to me, fag?” Richard says.

Richard looks at me like I’m speaking Russian. Other than that, nothing changes. Fuck, did it not work? Did my weeks of planning result in nothing? My heart races as panic sets in. Alex was right, we should have just gotten dressed and left.

“What?” Richard says. And in that moment, it’s like my heart stops. Maybe my plan didn’t fail. Maybe he honestly didn’t hear the trigger word.

And a heartbeat later, it’s like a light flicks off in Richard’s head. The anger evaporates and so, too, does his intelligence. His eyes look vacant and all muscle tension seems to disappear from his body.

I poke him in the middle of the forehead, but nothing happens. He doesn’t react.