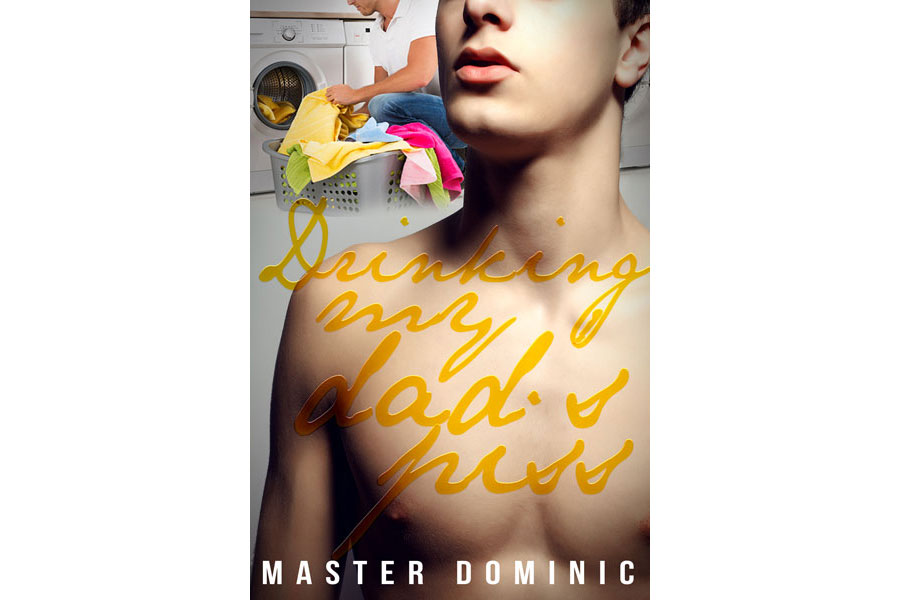 Charlie lives at home. He’s not in school and he doesn’t have a job. The only thing he does all day is sit around in his boxers and play video games.

His father has had enough of this. He feels it’s time for Charlie to grow up and move out. What he sees, though, is Charlie holding onto his childhood. And the symbol for that childhood is that pathetic blanket he’s had since he was a boy.

The only way to sever that bond to Charlie’s childhood is to piss all over it. Charlie, though, will do anything to save his blanket and hold onto his innocence — he’ll even swallow down his father’s piss so the blanket stays clean.

Dad stumbles in. I lose focus on the game, then pause it.

He’s drunk. I can tell by the way he’s leaning on the wall next to the door.

I put the controller down, but stay belly-down on the blanket to hide my erection. “I did all my chores.”

“Your chores? Fuck.” He takes a step forward, staggers, then plants himself in a firm fighter stance. “You ran that vacuum over the carpet so fast it just moved the fucking cat hair around.”

“There’s so much cat hair, Dad. I can’t help it that he sheds so much.”

Dad takes a step toward my bed. “If you did more than play those fucking games all day you’d take a look and see there’s more you can do to help here. Or maybe it’s time for a job.”

“Dad, I want to take the summer off. We agreed I could take a break before I decide what I’m doing. It’s a big decision.”

“It’s September! All you’re doing every time I come in here is sitting on that blanket, playing those fucking games. You’re not a kid anymore. Time to grow up.”

He takes another step toward me. Now he’s standing right at the edge of the bed. He’s wearing his ratty jeans and tight gray t-shirt. He always looks rough and dirty, and today there’s dirt and sweat in his forearm hairs from working in the garden.

Dad’s never hit me before, but when he gets upset like this I’ve always been uncomfortable. Not that he’d ever hit me. I just don’t like it when I know he’s not happy with me.

“I’m not ready to get a job yet,” I tell him. “I’m reflecting on my life. You know, like they say you should.” The urge to piss comes again, and I hump down by instinct.

Dad notices. I can tell by the way he frowns. “You’re too attached to that blanket,” he says. “Sitting here, lying in your bed, doing nothing, it’s like you’re still ten and life is all fun and games. Maybe if you get rid of that thing…”

The thought of getting rid of my blanket causes me panic. “I’ll do more chores. Even look for a job, if I have to.”

“No.” Dad comes forward some more, leaning his thighs against the edge of the bed now. “That blanket was cute when you were a kid. But now keeping it around is a reminder that you’ve failed to grow up.”

I’m thinking of something to say, but that all goes to shit when Dad’s hands go to the button on his jeans and then he zips down his fly.

“Dad,” I protest. Quick as that, he flips his underwear down and pops his cock out. It’s semi-stiff, a good five inch shaft of thick meat.

I’m still in shock trying to figure out what the fuck he’s doing when the yellow stream starts flowing from his dick. Yellow. He’s pissing! He’s got his cock in one hand and he’s aiming it right at my blanket.

“What the fuck!” I scramble over a bit, but not completely off my blanket. Piss splatters against it in front of me, forming a puddle at the edge.