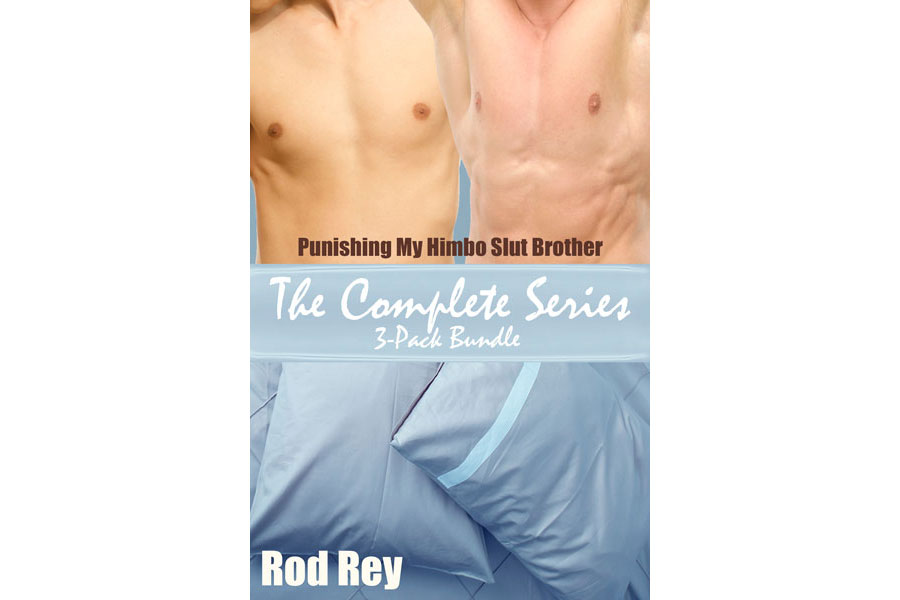 Noah is a man of God and a soon-to-be ministry student. When he discovers just how sinful his himbo brother Ark is, he’s determined to save the man and turn him away from sin and toward a better life.

But as Noah delves deeper into Ark’s sexual deviancy, Noah feels pulled toward the sin…to engage in it himself. After all, if he’s to save his brother, he must first understand the allure of that sin.

As he’s pulled deeper, Noah realizes that he loves Ark as more than just a brother, and what he wants from his brother is something God could never condone—but that doesn’t stop Noah.

Punishing My Himbo Slut Brother: The Complete Series 3-Pack Bundle collects all three stories in the series (Sin, Release, and Punishment) in one 14,000 word bundle full of taboo desires.

“I disagree. But I get it. Ark’s your brother, so it makes sense you don’t want to accept this. Anyway, I have to go. See you in church. God bless you.”

“God bless you too.” I ended the call and stared at the text that contained nothing but the suddenly-infamous link. Our cozy little town in northern Wisconsin had no room for gays, so why would our family? Dad would disown Ark if all of this were true. He’d said so multiple times about hypothetically having a gay son, while he’d use corrective rape for a pretty and feminine lesbian daughter. I didn’t agree with the latter because it was disgusting and just wrong. Gay was gay regardless of gender, and they all had a chance to be righteous with God if they repented. I just prayed it was all a big misunderstanding and that Ark really wasn’t gay.

After staring at the link for a moment longer, I bit the bullet and tapped on the link to open the browser. Ginger The Jelloboy? But was that Ark’s face pic used on the profile? Red hair, greenish-blue eyes, lightly-freckled face…oh, goodness, it really was him, and with a horny expression I’d never seen. The fact that we strongly resembled each other was even more humiliating because I could almost see myself in his face, just that he was a jock like Dad used to be—Dad was still in good shape for his age, though. Meanwhile, my skinny body couldn’t fatten up no matter how much I ate, just like Mom. I was a lot taller than Ark too, about Dad’s height, so our faces were all we had in common.

And that bio? Why would Ark call himself a “buttslut jock with a used hole?” That was disgusting. This wasn’t right. Maybe it was a prank. Maybe someone had created this profile and used his pic.

I reluctantly clicked on the videos tab, and my eyes grew wide at a slew of video thumbnails popping up. What the… I rushed to grab my earbuds and plugged them into my phone. This needed a proper investigation. It was too important to ignore. I swallowed, not wanting to accept any of this. Maybe it really was a prank. Yeah, yeah. It had to be. Ark wasn’t the type to do this. I knew him my whole life!

I clicked on the latest free teaser and started the video clip. Loud pop music with horny female moans and sexually-vulgar lyrics played, startling me enough to quickly lower the volume. Ark’s big and smooth butt bounced like jello on a huge, Black cock, moaning in a tone I’d never heard before while saying, “Fuck me like a dirty slut.” What…? Then, a big, white cock pounded his butt in hard thwacks, making it jiggle some more, along with cock after cock after cock. Even a double penetration scene involving two Black guys! Finally, his face was jizzed on by a bunch of jocks in a chorus of loud groans, his tongue wiggling around as if hungry for it. The video ended with a caption that said to subscribe to his videos “for more sinfully sweet fun.” And it had all taken place in his room.

On the other side of my left wall.

Prefer the individual stories instead of the bundle?