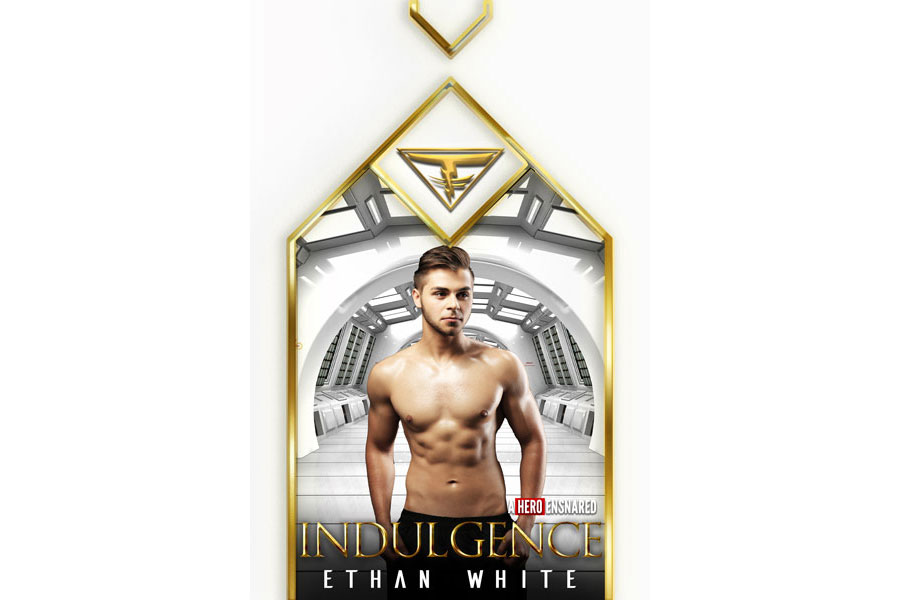 Corey Cooper, A.K.A. Tempest, vigilant protector and pride of Selene City, has been found and rescued from a cabal of powerful villains after a month and a half of no contact.

Castor, who has been using his shapeshifter powers to stand in for Corey in his absence pays him a visit at the hospital where he is convalescing and gives him some much-needed relief and some not-as-necessary self-indulgence.

Indulgence is a 7,000-word short story and part one of a four-part series.

Castor flashed the broadest grin he could at Corey. “Now, now, Corey. Let’s not pretend you’re all pure and innocent either. You probably have some sort of fantasy about fucking yourself,” he said.

Corey leaned up, propping his torso up with his elbows against the mattress. “What if I did?” he said, voice dropping to a lower, huskier register. “You going to do anything about it? I bet you love to transform into me and jerk off in front of a mirror so you can watch me beating my meat.”

“Oh yeah. I love to edge your big cock while standing in front of the bathroom mirror. Did you know that you blush from your neck when you get turned on?” Castor purred.

Castor leaned forward, looking up to meet Corey’s gaze. He licked his lips. With a small grin tugging at the corner of his lips, he cast his gaze down.

Hook, line, and sinker, Castor thought to himself and chuckled. Now that he had Corey’s attention where he wanted it, he rubbed the erection growing between his own legs.

It was a little bit filthy, and maybe a lot crazy, but Castor had been banking on it. “Then maybe you could use a hand?” he said, feigning innocence. “Or a mouth?”

Corey sucked in a breath. He flicked his gaze out past Castor’s shoulder, at the door. “I shouldn’t—” Corey said, glancing back down between Castor’s legs. “I can’t possibly ask—”

Castor smiled. He grabbed Corey’s hand and raised it to his lips. He caught a finger in his lips and popped it in, swirling his tongue once around the tip. “You’re not asking,” he murmured, in a low and husky voice. “I’m offering.”

A bright pink flush bloomed on Corey’s cheeks. It was adorable, really. It was easy to forget that Corey was a little bit on the meeker side when his heroic alter ego, Tempest, was such a fucking badass. It was really nice to see this more vulnerable, more bashful side. It awakened something inside him that he rarely got to indulge since he was more on the submissive side himself.

Castor stood from his seat, a glint in his eye. He lowered Corey’s hand from his lips to his crotch, bumping the outline of his hard cock against the knuckles. “SIBYL, would you be able to activate the privacy screen for us?” said Castor.

“I would be able to do so, yes,” chimed SIBYL in response, though she didn’t actually activate the privacy screen. “While Corey’s physical condition has experienced remarkable improvement ever since Fatima started treating him, I must advise that he refrain from any strenuous activity.”