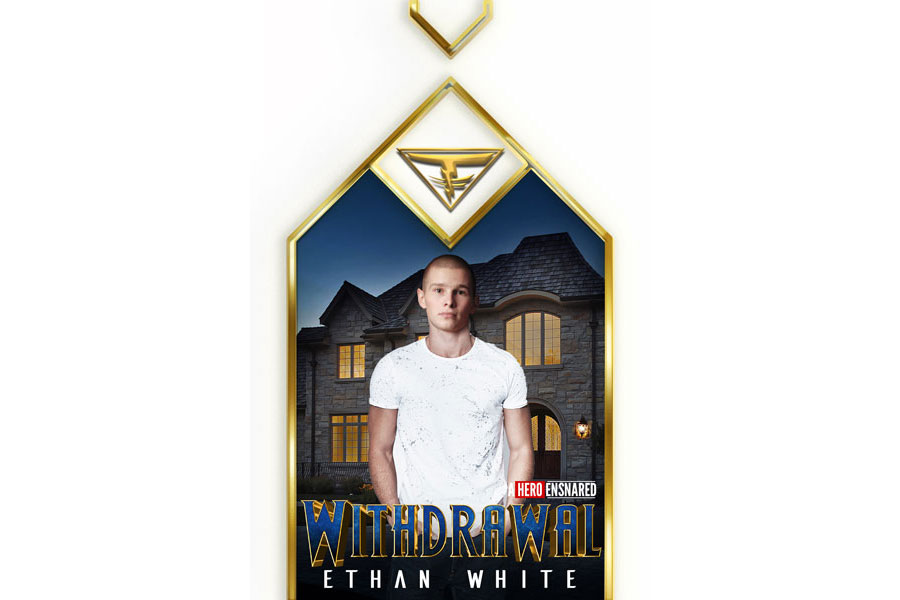 Marcus, A.K.A. the archvillain Imperious, is not a man that takes “no,” for an answer. When Castor refuses to surrender himself mind, body, and soul to Marcus’ service, he ends up locked in an enchanted filigree chastity cage.

While he is able to resist the temptation for a while, his body’s needs eventually drive him up the wall, and only one man can give him what he needs. Despite his better judgment he approaches Marcus, principles and morals discarded for the need that’s eating him up from the inside.

Withdrawal is an 8,000-word short story and part four of a four-part series.

Again, Marcus shook his head. “No,” he said. “I want you to give yourself to me. Body, mind, and soul. Serve me at and for my pleasure.”

Castor gulped. His cock twitched. “What? Like a sex slave?”

For once, Castor was able to shut down the arousal. The shock was too much. He gawped at Marcus for a moment, his mind spinning at the thought. “W-what the hell?!” he said. “N-no way!”

Despite how far he’d fallen, he still had some scruples. Just because he’d let his penis corrupt him into a filthy pervert didn’t mean he wanted to serve as a villain’s fucktoy.

Not that the prospect wasn’t tempting. His cock certainly made no secret of that. Despite having come only minutes before, he was starting to chub up again, and all because of Marcus’ offer.

Castor shook his head. No. He had to focus. This was a step too far and he couldn’t believe part of him was seriously considering it.

He hadn’t fallen that far, had he? Just because he didn’t consider himself a hero anymore didn’t mean he didn’t give a shit about the cause anymore.

But the idea was just so hot. He and the tiny voice in the back of his head agreed on that. He had to at least admit that.

But just because it was hot didn’t mean he had to do it. No. No. No matter how hard the prospect made him, that was a step he couldn’t take.

Marcus chuckled. It was almost predictable that he’d enjoy the conflict raging inside Castor. A villain through and through, no matter how handsome he looked.

“Do you mean to tell me you are happy with the way things are?” said Marcus.

Castor’s cheeks took on a faint pink tinge. “W-what do you mean?” he stammered.

“Oh, you must be feeling it now,” said Marcus. “Guilt. Remorse. A sinking feeling in your gut. Not because you are a cock-obsessed pervert—I know you accept that and part of you, indeed, is actually quite proud of the fact—but because of what you have failed to do.”

He did feel bad. Not because he’d played with himself and gooned out on his penis on the job, but because he’d ruined things for Corey as a result.

The only reason he wasn’t beating himself up over it was that Marcus had talked about rescheduling the date being a net benefit. Otherwise, he might well have hated himself into the next week.

Marcus grabbed Castor by the face, placing his thumb on his chin and hooking his index finger underneath. He forced him to look into his enchanting blue eyes as he said, “Are you satisfied with being a cock-addicted, porn-addicted loser that lets his friends down because he is too much of a reprobate to know even the slightest hint of restraint?”

A smirk tugged at the corner of Marcus’ mouth as he continued. “You and I both know this will only get worse. Degenerates like you only ever do. There will come the occasion when you goon on your batestick at the wrong time and hurt someone you love.”

Marcus’ blue eyes felt like they were boring into the very depths of Castor’s soul, where all his fears and insecurities lay. “Is that the life you want to live, pervert?” Marcus whispered, his voice like ice water pouring down the curve of Castor’s spine.

Marcus laughed as Castor felt something cold and hard cinch around the base of his cock. “I think you’ll find, Mr. Caldwell, I am not a man who is used to hearing the word ‘No.’ You will come around. One way or another.”

Castor looked down as Marcus released his chin. Just in time to watch the man’s hand fasten a tight filigree cage around his cock.