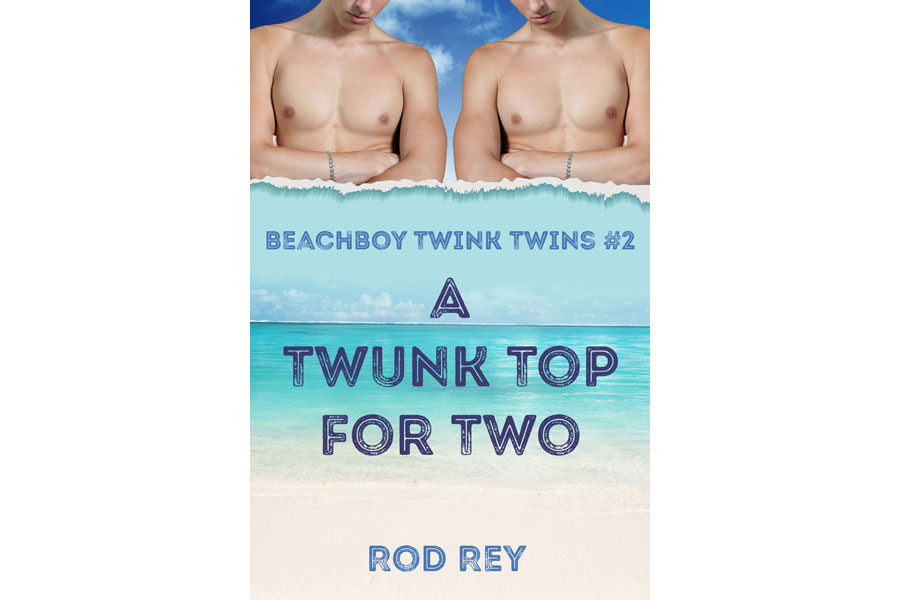 The tables have turned between the twinky Ken doll twins, and now it's Trent's turn to enjoy a hookup. After their first and only encounter with a silver daddy, it's time for a hot twunk to make Trent happy, much to Tyde's reluctance. After all, they have different tastes: Trent prefers jocks and twunks his age, while Tyde prefers daddies and granddaddies. The exception is each other.

If only they weren't total bottoms. If only they didn't have such a prestigious reputation to uphold because of their billionaire last name. Otherwise, they would've been exclusive by now and not have to worry about their clashing hookup experiences. And since they do everything together, hooking up on their own is out of the question.

Still, Tyde is always willing to make Trent happy because that's his broby. Lucky for Tyde, he can still enjoy Trent. But unlike their previous silver daddy hookup, this one is quite different. It's not so much that it's a twunk this time, but rather, an eye-opener that could change the twins' romantic lives for good.

And possibly bring them closer than they've ever been before.

We did have to hide the sexual and romantic facets of our brotherhood, though. While incest was legal here, it was still heavily frowned upon. I couldn’t imagine life with my own twin in it. We weren’t just brothers; we were lovers for life. We didn’t actually feel shame; we just had a pristine reputation to uphold because of our billions-worth Peenthicke last name. Granted, we weren’t the most well-known like our granduncle Bob was as the governor of Cestin Island, as well as his wife, kids, and grandkids. But our uppity family would never approve of incest. Thankfully, we were openly gay with no issues.

Crayden randomly came to mind, probably because of incest. He was a cousin who was a beautiful fashion model already with his own reality show at only twenty.

“You think I should ever call Crayden on the phone one day?” I asked.

Tyde shrugged. “You can try, but he’ll most likely be busy. You still want him bad.” There was no jealousy, though. We were practically in an open relationship despite being lovers.

“I do! Mugh, it’s so frustrating because he’s the only one besides you I’ve ever wanted as more than just sex.”

“I know the feeling, broby. I still can’t get over Gramps.”

I frowned, wishing Gramps weren’t straight and married, if just for Tyde. Gramps was a fitness coach and the owner of a gym Tyde and I had worked out in plenty of times. Even though I’d never be able to feel an iota of what Tyde felt for him, Gramps was in the best of shape for a man his age. Maybe part of it was because he kind of resembled Harrison Ford in the face, except with dark-blue eyes.

“And that anaconda of a cock,” Tyde said. “God, what I’d do to suck the daddy milk out of that big meat.”

I tittered. “I’d do the same with Crayden.”

“You’d have a better shot with him than me with Gramps. You guys at least fooled around.”

“Yeah, when we were little, which was mostly humping. He’s most likely straight since he’s had so many girlfriends.”

Tyde formed a devious grin. “Let’s invite them for a guys’ night out and get wasted so we can all fuck.”

I rolled my eyes. “Like that will ever happen. Besides, I’d never want to have sex while drunk. I’d want to enjoy it naturally.”

We reached the spot where the small bonfire was. And there he was, the brunet twunk with brown eyes, a sun-kissed tan, and a hot body that was both thin and muscled, just like in the pic. He stood to my right. What a boner-making hottie. I’d love to do all sorts of naughty things with him.

The blond guy who stood to the twunk’s left was probably his buddy. He had an average build but with a cute face, definitely our age. He was kind of dreamy in a fresh-face, all-American, boy-next-door type of way. I imagined he wasn’t attracted to me and Tyde, at least not in the way I was.

My heart raced. What an experience this would be. Not only would Tyde and I have sex with the twunk, but we’d do it in front of someone else. I’d always had sex in private, even though I’d only been with Tyde and the silver daddy from last week. Sex had never been something I’d consider doing in public…-ish? Where would we do it tonight?

“Trent thinks so too,” Tyde said, smirking. “He wants to suck your big cock.”

My eyes bulged. Oh. My. God. Tyde! I gave him a narrowed look, my lips pursing.

My heart rate sped up.

The twunk chuckled. “I look forward to that ass. I’m Kenny, by the way. This is Zacky. He’ll be watching us and getting off from a distance, but try not to talk to him or even look at him during the fuck, okay? Just pretend he’s not here.”