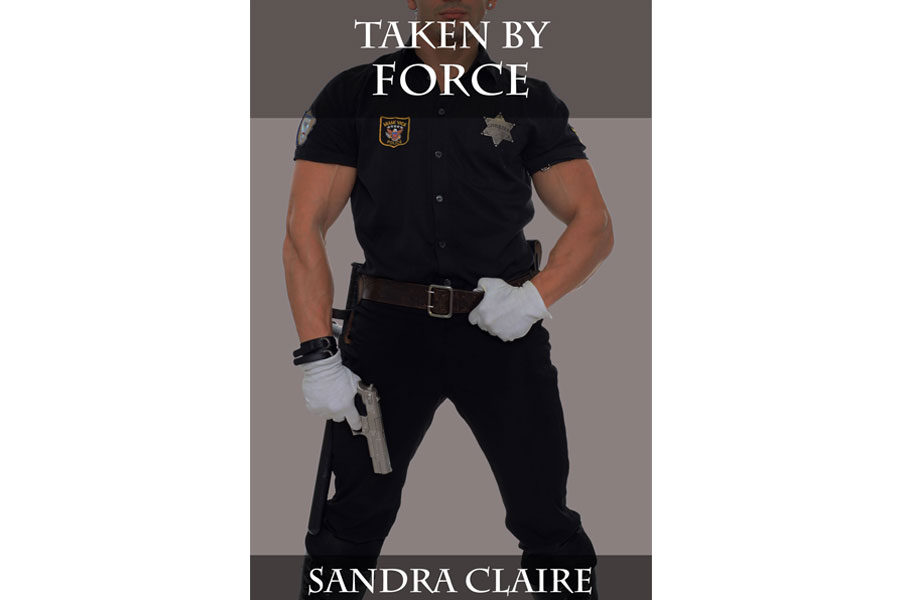 Craig is a law student at a Christian university and a steady, long-term girlfriend. He also has a secret drug addiction, and when he gets caught buying weed, he can see his life crashing down around him. The cop that catches him is hard, cruel, and unyielding, and won’t let Craig off with a simple warning. Desperate, Craig makes one final plea, falling to his knees.

WARNING: This 4,600-word short story contains an explicit sex scene between a dominating older cop and a submissive younger man that will leave you hot and bothered, and is intended for mature adults only.

“ID,” the cop said, his low voice rumbling through me again.

I reached into my pocket and pulled out my wallet, then slipped my drivers license out of its holder. I passed it to him and his fingers brushed against mine — was that intentional? It felt intentional.

Calm down! I’m not gay, I told myself again. What the fuck was going on in my head and in my pants?

“Craig James,” he said, reading my name aloud. Hearing him say my name like that sent a new shiver through me. He looked at me, as if comparing my ID photo to the real deal, then he put my ID in his pocket and opened the flap of a leather holder on his belt. The gleam of the streetlight glancing off metal handcuffs shone brightly.

Fuck, fuck, fuck — this wasn’t happening! I couldn’t get arrested!

“Please, sir, please, can I explain?” I begged.

“Hands against the wall,” he said. He was no-nonsense, all business.

“Hands against the fucking wall, kid!” A vein stood out on his forehead and his face immediately got red.

Chastised, I put my hands against the wall and prayed to God that I would get out of this. I couldn’t call my parents to get me out of jail — they’d freak. And I certainly couldn’t call my girlfriend — she was so uptight that she’d dump me over the phone for getting arrested and then probably inform the college about it and the reason why. That left maybe my roommate. But he couldn’t keep his fucking mouth shut and this would spread like wildfire through campus, eventually reaching my girlfriend and the dean.

The cop came up behind me and kicked my feet so that I spread my legs. He put his strong, broad hands on me, patting me down from head to toe along the outside of my body. When he reached my feet, he stood up again and patted my back and ass; I flinched from his hands on my ass, for some reason reacting to him touching there. Then he reached around me and — oh, fuck — I felt his hard cock press against my ass as he patted my chest, and I was nowhere near as disgusted as I should have been with his dick on my butt. I forced that thought out of my mind, choosing not to think on it. His hands continued roaming down, searching for weapons or drugs. Eventually, his hands landed on my hard cock, sending a weird jolt of pleasure through me. He seemed to grope me a bit, feeling around and making sure it was all me and not a gun or something, then he moved down, patting the front of my legs and between them, coming back up to my crotch and feeling my sack.

Fuck, why did this feel so good?

Jesse is enjoying the ski trip with his friends, and enjoying getting to know his friend's mom, a super hot cougar, a little better. Soon he'll get to know her even better when they step into the sauna naked.

Cougar in Heat by Sandra Claire

Father Peter gives in to his secret desires and starts with some sex in the confessional!