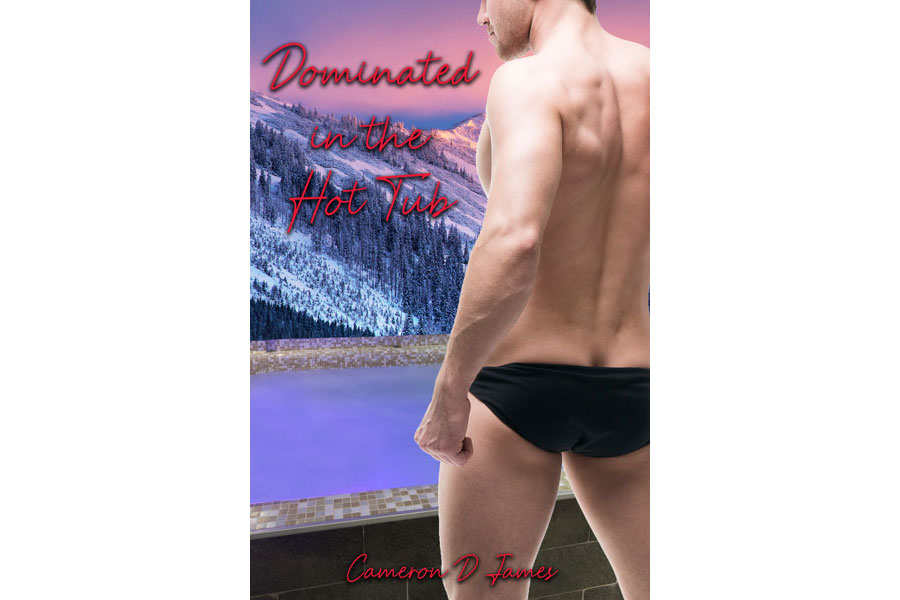 Jay was supposed to be on a romantic ski getaway with his boyfriend Carl…only to have Carl dump him days before for some brainless twink. Not willing to lose money on the ski resort’s “no cancellations” policy, Jay hits the slopes as a sort of makeshift one-man “Get Over Carl Party”.

But that only gets him so far. At the end of it all, Jay realizes he needs something, even if he doesn’t know what it is. Something in his life just feels…missing.

As he soaks in the outdoor hot tub late at night in privacy and quiet, he contemplates all of this. Then someone joins him in the tub.

At first, Jay is pissed that he no longer has privacy, but then he sees who it is. A burly, hairy, hunky daddy that obviously has eyes for Jay. And after a little bit of flirting to test the waters, Jay makes his move.

He knows what’s missing in his life—it’s this anonymous hot tub man with the dominating personality and the sexual appetite of a teenager.

Get your copy for FREE!

I sunk in the hot tub until the steamy, bubbly water tickled at the bottoms of my ear lobes. I let out a sigh and just closed my eyes, letting that warmth seep into my aching body. But the pain was good.

I was supposed to come to Tahoe and ski the slopes with Carl…but then he dumped me for some brainless twink. I’d considered cancelling the reservation, but with this place’s “no refund” policy, I decided to make it a Get Over Carl Getaway for just myself. I brought my work BFF Jennifer with me, but while she lounged in the chalet all day, I’d kept myself busy.

Carl had been wrong for me anyway. He had wanted love and romance, whereas I wanted to be dominated and treated like the stubby pig I was. It had been far too long since I’d had a good dicking.

There were some hot guys here at the ski resort, but since I was here with Jennifer I had to behave. Besides, some skiing, sun, and late night hot tub soaks would do me some good. I leaned my head back and looked up at the stars above. The air was cool and crisp and snow covered most of the surfaces except for the paved path leading up to the hot tub.

And it was quiet. So blessedly quiet. I closed my eyes and just enjoyed the silence.

And that’s why I groaned when I heard the soft pat-pat of footsteps coming my way. I kept my eyes closed, hoping that whoever it was would just pass on by or, if they were sticking around, not bother me.

Then I heard the quiet rustle of a towel falling to the ground, followed by the gentle splash of someone getting into the hot tub with me. I couldn’t help it. I groaned.

“Hey,” said the person—a man. His voice was deep and sexy, even with just that one word. When I opened my eyes, his face and body had better be as sexy as his voice if he’s going to interrupt my solitude like this.

When I did open my eyes…he was a hot daddy.

Hot daddies are my type…even if twinks consider me a hot daddy too. Dominant hot daddies were even more my thing, and there was a glint in this guy’s eye that told me he might like to shove my face into a wall while pounding me from behind.

“Hey,” I said. I sat a little more upright so that it didn’t look like I was trying to ignore him. Like, that was my original plan, but now that I was seeing the potential of getting some daddy dick, my plan had changed.

“Nice night,” he said. Then he sighed as he sunk into the tub. He was clear on the other side, but this was a fairly small tub. So small that when he fully relaxed, his toes brushed against mine. And neither of us pulled back.

He looked at me and smiled in a way that told me his toes touching mine was a little bit of a test. And I passed. With flying rainbow colors.

“You vacationing with your boyfriend?” he asked, likely using this as an opportunity to confirm he had my orientation pegged right.

“Single,” I said. “The asshole dumped me for some nineteen-year-old twink.”

“That sucks,” he said. “I’m here with my BF. It was supposed to be the romantic getaway to fix our relationship, but I’m not sure it’s working.”

“Eh, don’t be. I knew he was an idiot when I bought him a drink six months ago, but it was that hot ass of his that helped me see past that for a while.” I watched as the steam from the hot tub coalesced in little beads of moisture on his facial scruff that glistened in the bright moonlight. He was so rugged and handsome, way more than Carl ever was.

“So he’s up in your room?” I asked, testing the waters.

“Can’t. Sharing the room with a friend.”

He looked around, checking out our surroundings. “Why don’t you sidle up a little closer?”

I glanced around too. I had no idea how I had lucked out with deciding to hot tub on such a quiet night, but there was nobody around. There was lots going on in the chalet—I could see dozens and dozens of people having a blast through all the large windows. But out here in the hot tub? It was just me and this hunky daddy.

I shuffled around, sliding across the seat that ringed the hot tub until I was next to him. We were facing the chalet windows and behind us was the peaceful and dark mountains. From this position we could be sure of our privacy since we’d see anyone coming our way from the chalet.

“Let me see what you’re packing,” he said. He slid a hand over my leg and groped the front of my Speedo. I was already semi-hard, but his rough touch only served to make me fully hard.

Get your copy for FREE!