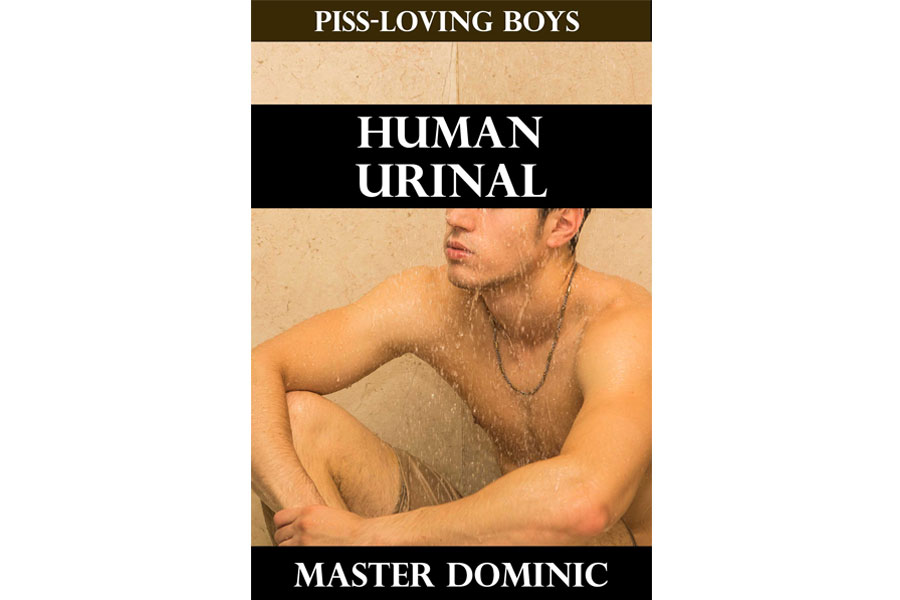 Andrew is a cocky, disrespectful young man with no respect for his elders. When he pisses off the wrong silver daddy at the gay bar, he quickly finds himself overpowered, stripped, and tied to the men’s room urinal.

The silver daddy exacts his revenge in the form of a steaming, golden stream. Andrew becomes the human urinal for all the men in the bar, but as the night goes on and Andrew gets wetter, he discovers his true calling as a submissive piss-drinker.

Some time later — I have no idea how much time had passed — I woke with a groan. I jolted, suddenly remembering what had happened. Fuck, my head hurt. I opened my eyes, blinking several times against the harsh lighting.

I tried to bring my hand to my head, to see if I was bleeding, but I couldn’t move my hand more than an inch or two. I looked over and it took a moment to understand what I was seeing. There was rope circled around my wrist, and the other end of it was tied to one of the heavy pipes above the trough urinal.

I looked to my other hand and found it was tied just the same. My feet, too, were tied up, one tied to a stall wall and the other tied to the bottom of a sink.

And I was naked.

And I was sitting in the urinal trough.

“Whuh thu fhu?” I said. What? Through the pain that still flooded my head, I felt something strange … straps tied around my head and in my mouth was a metal … thing … to keep my mouth wide open.

The panic that had been building suddenly boiled over. I struggled against the ropes and screamed. What the fuck was going on? Did that troll do this to me? Fuck, I had to get out of there. I had to go to the cops and get the fucker arrested. I had to—

“Well … well … well…” I heard a voice say. I realized it was the troll who’d decked me, but I couldn’t see him anywhere. Slow, heavy footsteps echoed through the men’s room and I saw — what was his name … Brent? — come around the stalls toward me. “Someone’s awake.”

New rage surged through me. Once I got free of these ropes, I’d kill the motherfucker. I struggled against them, hoping one of them — just one of them — was loose enough for me to squeeze my hand out. If I could get one hand free, I’d be able to fight him off and free myself.

Brent sauntered closer, seemingly unafraid and uncaring of the world of pain I was about to inflict on him … if I could only get free. Instead, he reached for the fly of his jeans and opened it up, letting his thick cock flop out. Though it was huge, I was still disgusted because I don’t do grandpa-dick … and the ass-wipe seemed to take delight in my disgust.

If he forced me to suck it, I’d bite it off and spit it out. He’d be sorry he ever messed with me. Then I realized I still had this … thing in my mouth and couldn’t close my jaw. My fear came rushing back as I realized how truly helpless I was. I struggled against the ropes some more, but I still couldn’t gain any space to wriggle my hands or feet out.

Brent came to a stop a foot in front of me, his cock dangling right in front of my face. I looked at it and then up at him. He had a hard glint in his eye — and it terrified me. What the fuck was he going to do? And how the fuck did he get me in here and tied up without anybody seeing? What did he think he was going to do? Rape me and then expect to get away with it?

And then I felt something hot splash on my face. I looked back at his dick and — oh, fuck — piss was streaming out of it and hitting me in the face. I closed me eyes and turned away, but he still aimed his hot stream at my face. It ran down my cheeks and some of it entered my mouth — and because of this, this fucking thing in my mouth, I couldn’t seal my lips. I tasted his salty, tangy piss. God, it was disgusting.