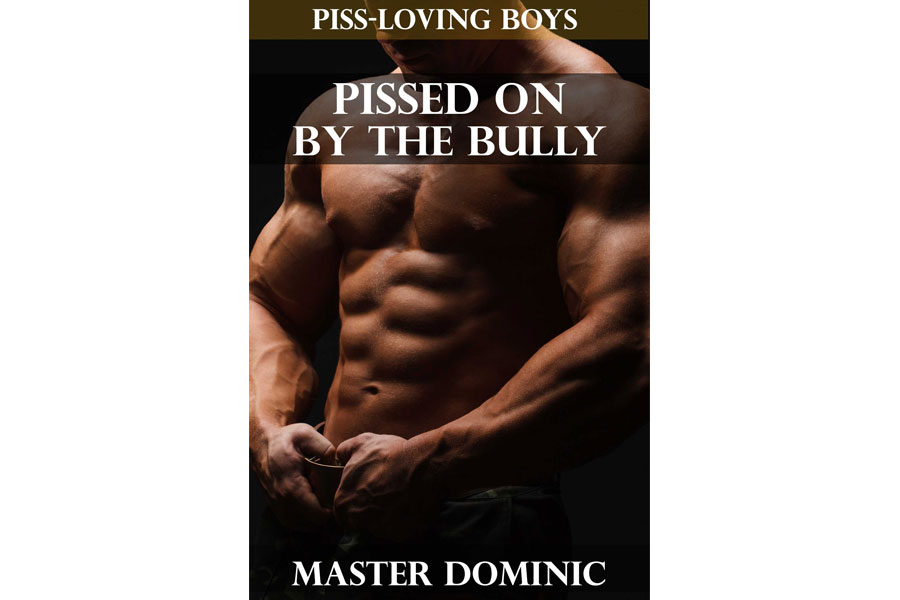 Joel is the biggest bully on the college campus, picking on all the guys in the Queer Alliance. Brian has had enough — he’s going to expose Joel for who he really is, a closeted gay guy, desperate for sex. When Brian lays a trap and actually snares Joel, he lays on his strongest charm, seducing Joel and convincing him to have sex. But the tables suddenly turn when Joel lets loose with a golden stream.

I hid behind the shelves in the library, pretending to be searching for something. It was late — the library was almost closed — and I’d been wasting the last half hour just lingering around, waiting for the right moment. Tonight was going to be the night. I’d been planning this for weeks and building up my courage to carry it out — and if I didn’t do it now, I might never do it.

Tonight I was going to expose the homophobic bully for the fag he is. Joel had been terrorizing me and half the other gay guys here at college. He’d been a regular topic during our Friday Night Bitch Sessions at our Queer Alliance meetings — we all longed to put him in his place, but didn’t know how.

But I figured it out. We suspected Joel was a closeted gay; there was just something about him that set off the gaydar of half the Alliance guys. I just had to catch him doing something gay — even if it meant forcing him into it — and film it so I could hold it against him. And here, in the quiet library near the end of a Thursday night, I was all set to make my move.

I heard the scrape of a chair, followed by heavy footsteps. I glanced through the books and saw Joel walking to the men’s room, already undoing his fly before he even entered. I sized him up — if he weren’t so homophobic, he’d be one hot fucker. He was tall, at least six feet, and built like a football player, with short dark hair and dark, piercing eyes.

The men’s room door clattered as he went in and it closed behind him. I’d already set up a spy cam in the stall, ready for this to happen. I’d been seducing him the whole evening, wandering through the books, looking like I was loitering, waiting for something or someone. But I made sure to never let him see my face — because then the plan would collapse. He knew me. He hated me. The hope was he’d see a skinny twink wandering the shelves, likely cruising, and eventually make his way to the men’s room in the hope that the twink would join him.

I quickly hurried around the bookcase and to the bathroom. I laid my hands on the door and listened for any noises — it was silent. I pushed my way in and stood inside the door, letting it clatter closed behind me. This bathroom held one stall and one urinal, side by side. I spied Joel’s sneakers — he was in the stall, sitting on the toilet.

I unzipped and walked to the urinal. I stood there, not pissing, in total silence. I wanted to make it clear that I wasn’t here to use the bathroom.

Joel coughed — it sounded forced. I knew some guys used this as a signal, so I coughed back. Then Joel shuffled in the stall and I heard him undo the latch, followed by the squeak of the door as it swung open a few inches.

Without putting my cock away, I walked around to the stall door and pushed it open. Joel was sitting on the crapper, with his hand around his surprisingly long and thick cock. He was stroking it already. His gaze started at my crotch and trailed upward, heavy with lust, until it reached my face.

His eyes widened and he stood up, pulling up his pants.

“What the fuck, Brian?” he said. “I was in the middle of something — you can’t just barge in on a guy when he’s on the shitter!”

I stepped closer to him and closed the stall door behind me, locking it. My heart was racing and my body was tensing for a beating, but I couldn’t back down now. “I know you want something,” I told him in a whisper, “something I can give you.”

And without waiting for him to even react, I fell to my knees in front of him and undid his jeans. He let me open his fly, he let me reach in and grab his cock, and he let me put my mouth on it. Oh, yeah, this guy’s gay.

I stretched my mouth wide to fit it all in me and I sucked on it like a lollipop. He tasted sweaty, like he didn’t shower after a workout at the gym, but I fucking loved it. I like my men dirty and sweaty and masculine. I fondled his balls in my hand, rolling them between my fingers, tugging on the sac, driving him wild.

Joel moaned, but quickly shut his mouth. He sat back down on the toilet and I moved a little closer to him, resting my arms on his muscular thighs. He put his hand on my head and grabbed my hair, forcing me to bob up and down at the pace he wanted.

An odd feeling rushed through me — I was enjoying this. I was no longer doing this to take down Joel, to take one for the team. No, I was somehow turned on by sucking off this guy that’s been so brutally mean to me and my closest friends.

Sure enough, his cock suddenly pulsed and my mouth filled with his hot — wait … fuck … this wasn’t come — this was piss! The douchebag was pissing in my mouth.

I tried to pull my head away from him, but he held me firm in place. “Drink it, bitch. Swallow it all,” he commanded.