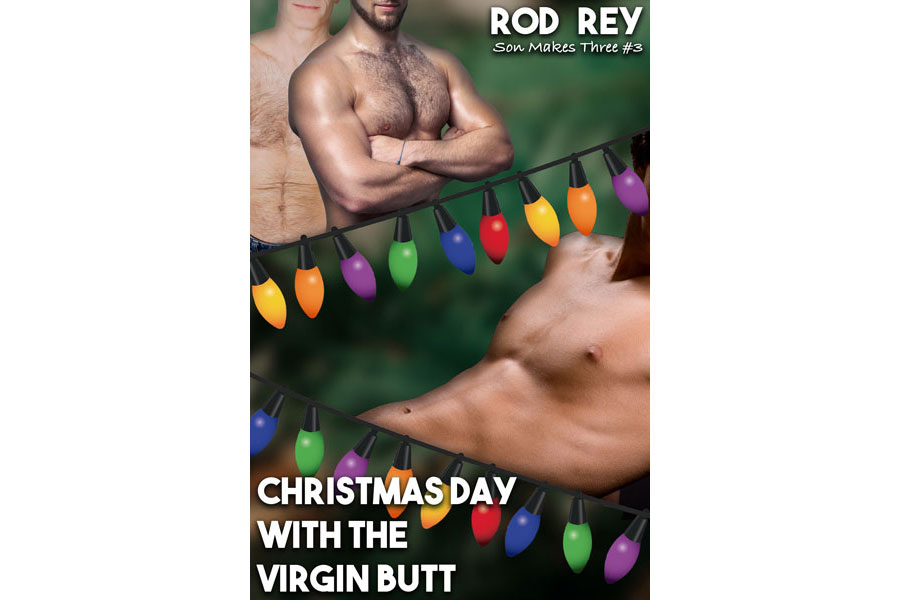 Otto and his dad, Wolf, have been in a monogamous and emotional marriage for years, just the two of them. All of that changed on a hot summer night six months ago when Otto’s son, Delfin, turned eighteen and wanted to join his father and grandfather in their special bond.

And there are only two men in his life that he wants to share it with.

Christmas Day with the Virgin Butt is a 4,500-word short story.

“When can we…open the presents?” Delfin said in his youthful voice, looking at me and Dad.

I gazed at my beautiful boy as I lay on his left side. He looked just like his estranged Brazilian mom: honey-tan skin, honey-colored eyes, and thick hair so beautifully black that it shone like silk. Despite being mixed with German from Dad’s side and French from Mom’s, he looked more Latino.

“We’ll open them soon, don’t worry,” Dad said in his German accent, brushing Delfin’s hair with his knuckles. He’d been more affectionate with him than ever before, like the two of them had grown closer than I’d realized. Honestly, I was glad, and it was beautiful to watch.

I remembered coming home very early from work a few weeks ago, and the two of them had been in our bedroom with the door closed, making noises like they’d been lifting something heavy. Flustered, Dad had demanded that I didn’t go in and that I wait instead. Apparently, it’d been my Christmas gift, which I’d open soon enough. How sweet that they’d wanted to surprise me. They’d insisted on showering right after, and we’d spent the rest of the day together.

I stroked Delfin’s cheek. Growing up, he’d been different from many other kids. His maturation process hadn’t caught up fast enough. However, his slight speech impediment hadn’t stopped him from learning how to speak well because of me and Dad being rigorous about it. Even though he was still young at heart, Dad and I made sure never to treat him as if he were different because he’d never be in our eyes. His struggle with speaking longer phrases to where he had to break them up a bit didn’t matter at all. He still managed very well, and I was always proud of him.

After loving on my beautiful son, I rubbed Dad’s chest, his graying-blond hairs tickling my knuckles. His furry wolf body never failed to captivate me in all the horny ways my moderately-hairy otter body could respond. He stroked my brown hair, our green eyes locking with one another with the kind of desire whose flame would never be put out. He was the sexiest man I knew, whose German name, Wolf, naturally fit him. He looked younger for fifty-eight, but it didn’t matter if he didn’t. He’d always be my king. He’d always be the man I worshiped every single day of my life as the patriarch of the Melker family. I, of course, would always be his prince.

Or maybe he should now be the emperor, I the king, and Delfin the prince. Truthfully, the idea of just the two of us together as husbands had been morphing into an unexpected intergenerational triad, and we wholeheartedly welcomed it. We only hoped that Delfin would want to be a permanent part of it, but we knew he had to decide that for himself. 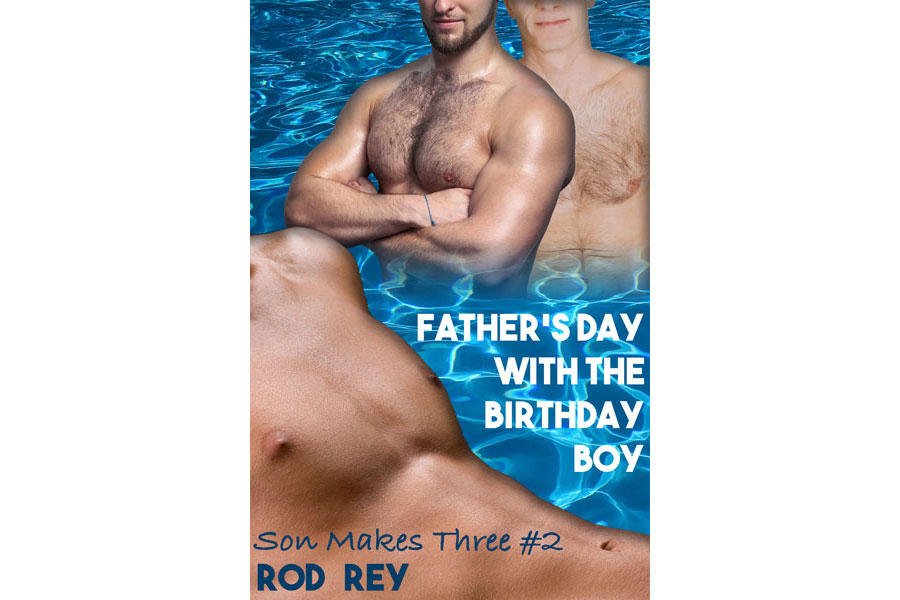 Otto and his dad, Wolf, are ready to take their long-term romantic relationship to the next level by including Otto's virgin twink son, Delfin, in more of their shared sexual bonding. Last night, Delfin experienced his first kiss, first ejaculation, and first taste of man milk, shared between the three.

Unlike most teens, Delfin is different in his own way, which is why Otto and Wolf give him all the unconditional love he could ever want. But he's often felt left out and continues to want in on their way of showing love to each other.

Now, it's just hours later on Delfin's eighteenth birthday, which also happens to be Father's Day. The three of them are in their backyard pool celebrating with all the privacy they could ever need. Incest may be legal where they live, but it's still heavily frowned upon, so they have to be a close family in private.

Otto and Wolf have plans to introduce Delfin to more sexual experiences. This time, it's all about the taste in more ways than one. Delfin just might get a mouthful of sausage like never before.

But it's not the kind they plan to grill for the special dual occasion.

Father's Day with the Birthday Boy is a 4,000-word short story.

Dad stroked my brown hair, his green eyes locking with my equally-green ones. What a sexy man whose German name, Wolf, naturally fit him. Since his blond hair wasn’t fully gray just yet, he looked younger for fifty-eight. My king, the man I worshiped every single day of my life as the patriarch of the Melker family. I was always his prince.

“I love you, Otto,” he said in his German accent.

We kissed, never able to get our hands off each other. He caressed my smooth backside and played with my trimmed hole, massaging my loose anus to make me hornier. Despite having showered and been in the pool all afternoon, he still gave off a musky scent of total man that intoxicated me every single time. I dropped my hands to play with his hairy hole. It was the beauty of being sexually versatile. We used our cocks and holes in more ways than one. Why limit ourselves?

“I want my beautiful son’s mouth on his daddy’s cock.” 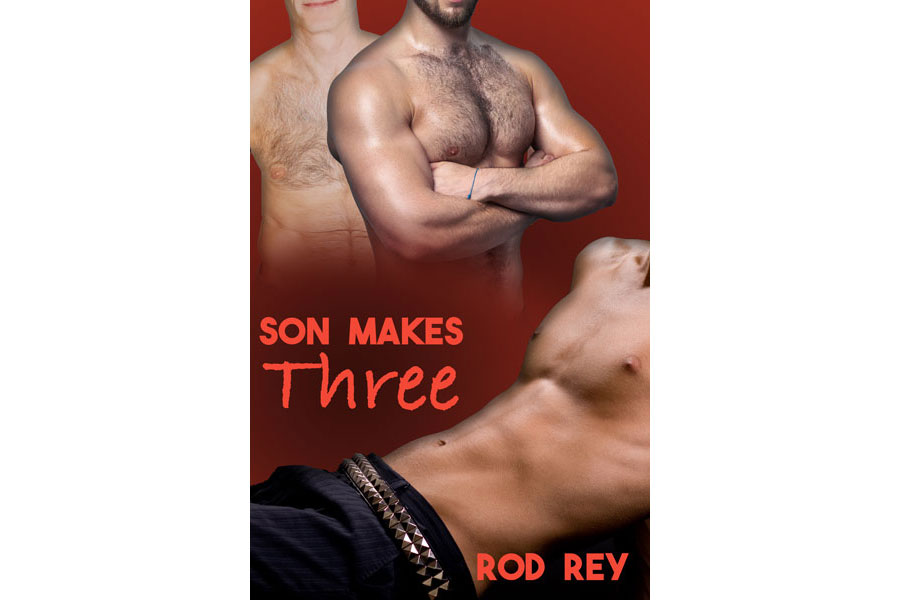 Otto and Wolf are son and father, respectively, and they've had a romantic and sexual relationship for a long time, even considering themselves married. Incest is legal where they live, but it's still heavily frowned upon, so they have to love in their own way behind closed doors.

Otto also has a son of his own, Delfin, and his little boy is all grown up at eighteen. Unlike most teens, Delfin is different in his own way, so much so that it led his own mother to no longer want anything to do with him. That's okay, though. He has both his dad and grandpa to give him all the unconditional love he could ever be spoiled with.

While Otto and Wolf love Delfin with all their hearts, it's still not enough. Delfin feels left out whenever he sees his dad and grandpa showing the kind of affection he never gets to have. Since Otto and Wolf's strong family bond has romantic and sexual facets, Delfin wants a part of it too. Could he finally get his wish? Could Otto and Wolf possibly bring the three of them closer and happier in a new way?

Now, I realized Delfin had every right to learn about intimacy. Weird or not, I wanted to make things right by teaching him anything and everything, even if it meant letting him out into the world on his own one day, which Dad and I weren’t prepared for just yet.

Delfin moved away and pulled his T-shirt off his torso, tossing it onto the floor. Then, he pulled down his PJ bottoms and underwear and kicked them off his feet. “I’m naked…like you guys!”

Dad and I chuckled, and we gazed at my son with so much fondness. He was our pride and joy, and we were fiercely protective of him to the point of hurting anyone who’d hurt him. We caressed his naturally smooth and skinny body, mostly his chest. At eighteen, he was officially a twink, but he was also well-endowed from all the times I’d seen him. When I saw Dad rubbing Delfin’s right nipple with his thumb, I rubbed his left one. The goosebumps forming on his warm skin told me how much he wanted this. As long as he desired us like Dad and I started to, we’d make sure he felt good everywhere.

Delfin stifled a giggle and inhaled, as if trying to withstand what was probably ticklish to him. “Yeah. Feels good.”

“Anytime you want to stop, you let us know, okay?” I said. God, I was so turned on by this. I wanted my own son in ways I’d never thought would happen.