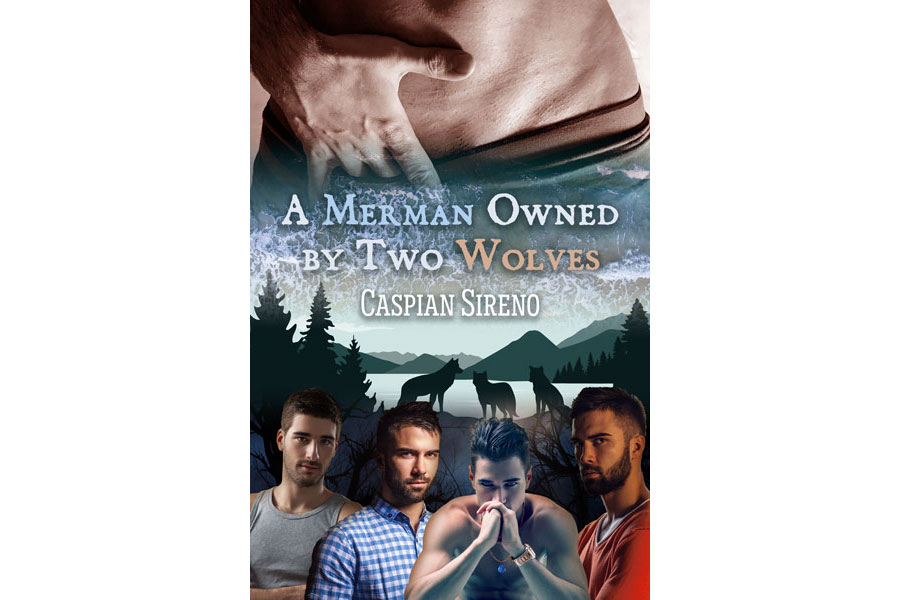 When Jordan was born, his parents feared he'd go to the sea. So, they made a request to the sea witch to have him stripped of his merman abilities, leaving him with just his DNA, their last name, and a magical pendant known as Mermother's Tear. Now at twenty-two and a recent college graduate, Jordan longs to live life underwater. Sure, he's had memorable experiences as a human, but he yearns to return to his destiny.

He’s not alone in being a nonhuman creature trapped in human form. He connected online with twin wolves Rowdy and Roar, and tonight is the night to finally meet in person. Though both twins are attractive, something about Roar captivates him more than Rowdy, and Roar seems to feel the same way. But little does Jordan know what they have planned, particularly Rowdy who's the Alpha of his pack.

Roar gives Jordan so much hope for something special he's never had before. Equally so when Jordan later meets Rumbly, another wolf like no other. These two wolves aren't just hot, sexy, and loving, but they could become the start of a foreign journey for Jordan. After all, not all wolves are evil. Some just want what Jordan wants: true love.

Others want something else entirely, such as Jordan’s Mermother's Tear.

But all Jordan wants is to return to the sea. And that's the problem. He's been stripped of his abilities, so he can never do so.

I sauntered toward the bar counter to my right that was a bit away from the dancefloor. Even the bartenders were hot, as if the club owner were quite selective on hiring staff. Or maybe I just had good taste, who knew?

I smiled. “A Long Island, please?”

I had to consider that for a moment. Did I want to get drunk? It’d been a while, and I’d been a bit stressed and anxious over getting the new job. In fact, I still had yet to celebrate properly, since getting that job was a huge deal and an even bigger life-changer. I started in just days. I sensed others waiting and knew I had to decide right away. “Make that…strong, I guess.” I clenched my teeth with guilty anticipation over Cerie’s lingering words. One strong drink couldn’t hurt, and I’d be meeting Rowdy and Roar here, a public venue.

And if one didn’t hurt, neither would a second.

“Right up!” He got back to work and mixed away.

I scanned the crowd some more, plenty of eyes all over me. What was on their minds? I smiled, nonetheless. I stared at the dancefloor while it called my name loud enough to get to dancing at once. But then, I realized…how would I know when Rowdy and Roar would come? And what exactly would they wear? I hadn’t even thought to ask because I’d been so consumed with excitement. Luckily, they could recognize me through scent. If only I could like I was supposed to.

I snapped back to reality and rushed back to the counter. I paid, tipped, and grabbed my drink with a smile. I stirred my drink and took a quick sip. I wrinkled my face. Blech, this was strong. Oh, well. Why waste a drop? I sipped some more and ignored the bitterness.

After getting my second strong Long Island, I scoped around, feeling so buzzed and ready to dance. I finished my drink, joined the crowd, and swayed to the synthpop beat. One couldn’t go wrong with an ‘80s sound, even if mostly modern. I moved to what seemed more midtempo than fast. I swayed my arms and moved my hips side by side to the rhythm. This was life right now. I needed this celebratory escape tonight. Even if Rowdy and Roar ended up standing me up, I’d probably still have a blast.

But I didn’t expect they would.

More songs later with the drunkenness still hitting me hard, someone asked near my ear, “Jordan?” While I didn’t recognize the deep and sexy voice, I had a feeling who it was. I turned around, stunned.

No longer blurry, two brown-haired men with hazel eyes around my age stood there shirtless with bulge-defining jeans, sexy abs that could grate cheese, and dashing smiles of perfect teeth. They were beautiful twins and well-sculpted like models, built like man wolves, and even better than the measly pic I’d seen.

And for the first time, they aroused me.

They grinned and seemed just as interested as I was. Two hot brothers who were completely identical in face and body.

They started dancing along with me, slowly at first to warm up.

I didn’t even care that I got in between with probably a loopy grin on my face. I swayed in the middle of them and got a bit too close, the light scent of their cologne triggering my pheromones. As drunk as I was, I was probably  at risk of sleeping with them despite not knowing them too well. And it didn’t help that they allowed me to be this close to them, tempting me. I just wasn’t sure if I really wanted to hook up with anyone tonight.

One of them stared into my eyes while we continued swaying to some dance remix I vaguely remembered. His face was dangerously close to mine, our lips just inches apart. “I’m the louder twin, Rowdy.” What a deep, sexy voice that made me rise to the occasion. “That’s Roar, but he doesn’t talk much at all.”

For the first time, I had the chance to get to know them better in person. Maybe it was a last-minute outing, but an interesting one, nonetheless. Then again, I was too drunk to care about how we met. The room spun me around at times that I wasn’t always sure it was my own dancing going on.

Roar smiled at me with interest, acting rather bashful, and he got closer to my ear. “Pretty,” he said. He handed me a red rose, and his eyes sparkled with emotion. What a charmer. No one had given me a rose before.

I bit my lower lip. “Um…thanks.” I stared at the rose for a moment. Not expected at all.

I sniffed the center, and the floral scent calmed me. I’d smelled flowers before, but why was this one so intense and relaxing? I felt…different.