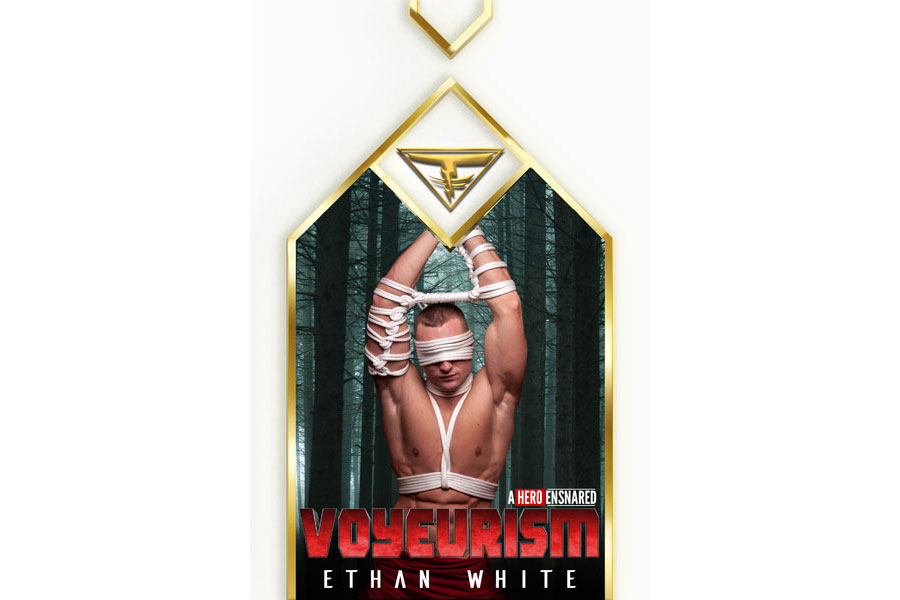 Castor Caldwell, A.K.A. Phantom, retired from active superhero duty years ago for good reason. He’s just not suited to that life anymore. He much prefers the relative luxury of using his shapeshifting powers to stand in for the front-liners, making sure their secret identities stay secret.

When Tempest is called back to duty, however, Castor is called up from retirement to keep an eye on him just in case there are some lingering effects from the younger super’s month-long capture. Unfortunately for him, things only get worse from there as an encounter with a fallen hero reveals that things are not quite as they seem with Tempest.

Voyeurism is a 7,000-word short story and part two of a four-part series.

Castor squirmed in his restraints. His cock throbbed. There was now a sizable lump in the front of his suit and thanks to the way Luxus had tied him up, he had no way to hide it.

Imperious turned away from the action and faced Castor. “Do you understand now?” he said. “Why you are nothing like him?”

Castor gulped. He could guess what Imperious was getting at. And considering where those bright blue eyes were currently pointed, he was all but certain.

“Nothing to say for yourself?” said Imperious, a small smirk playing on his lips. “That is perfectly acceptable. Allow me to elucidate.”

Despite Castor being tied to the tree as to essentially be at eye level with Imperious, the latter seemed to nevertheless loom over him. There was just something so undeniably imposing in the sheer weight of presence Imperious threw around.

Castor’s inner thigh trembled as Imperious’ fingers drifted feather-light along the curve of his leg. He could feel the nails tracing thin lines on his skin as if the suit wasn’t there at all.

His breath caught in his throat as Imperious’ fingers drifted to his crotch. The archvillain cupped his balls with the tips of his fingers.

“You’re not a real hero, are you, Castor?” Imperious murmured.

Castor’s heart skipped a beat. “W-what kind of nonsense is that? F-fuck you! I am a real hero!”

Imperious smirked. He slipped his hand forward, letting Castor’s balls rest in his palm as he massaged them with his thumb. Castor had to suck in a breath to suppress the moan that threatened to spill from his lips at the sensation.

The corner of Imperious’ mouth twitched. “You cannot mean to say you really think so. You know, deep down, you are a sorry excuse for a hero.”

Castor’s cheeks burned. Just because he’d chosen to retire didn’t mean he was any less of a hero than Tempest was.

He’d shed blood, sweat, and tears in the name of justice. He’d done his time. He was just done with the tragedy of all of it.

He was a hero, still. He wouldn’t have stayed on with the Hall, otherwise. There were Supers all over the place that led normal lives, perfectly aware of their powers and in control of their own destinies. Castor was with the Hall because he wanted to help, still, just not by being on the front lines of the war against villainy.

Imperious traced a single finger up along the underside of Castor’s cock. “Right about now, I imagine you are trying to rationalize to yourself that you are still a hero. That I am wrong…”

Heat bloomed across Castor’s cheeks. It seemed Imperious had him dead to rights.