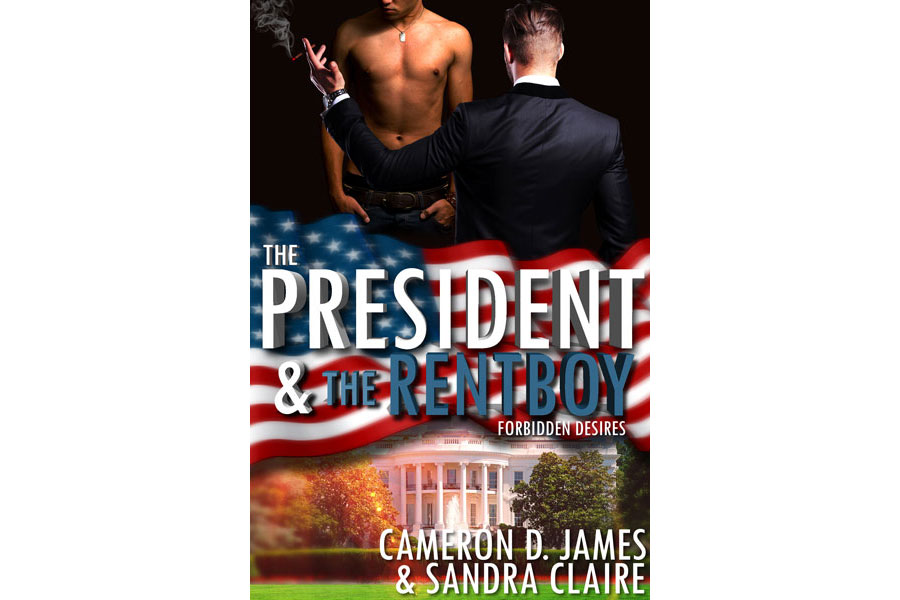 Newly inaugurated as the President of the United States of America, Daniel Grant has a secret. Despite winning a surprise upset election, built on a campaign filled with raucous rallies and an oft-repeated promise to deport illegal immigrants, Daniel is unhappy. While the media loves to speculate about him and his trophy wife, Melanie, the truth is there is no love in their relationship — moreover, as time goes on, Daniel is coming to understand that he prefers men. Itching for some sexual release, a senator discreetly hands him a phone number for Ricky — a rentboy.

Each sexy encounter with this seductive younger man leaves Daniel panting for more. But while his private sex life amps up, so, too, does his public political life, including increasing pressures from his vice-president to deport all illegal immigrants and bring about religious freedom laws so business can discriminate against LGBT customers.

Daniel struggles to balance his personal and public lives, to somehow continue seeing Ricky, despite the intense media scrutiny of everything the president does. Forbidden love is never easy, but it becomes near impossible when Daniel learns that Ricky, the young man he loves and desires so much, is an illegal immigrant from Mexico.

The President And The Rentboy is a 20,000-word novella.

The twink — Ricky — came in. Brad closed the door, leaving just me and the young man in the room.

“I recognize you...” Ricky said, trailing off. My blood suddenly ran cold, but then he added, “But I can’t place it.”

I almost wondered if he was playing me. I was on the news almost every day — I was a huge celebrity — how could someone not know who I was? I eyed him up and down, my gaze lingering just a little too long on his bulge. He didn’t strike me as the type that watched the news, but, still, I was easily the most recognizable person in the United States.

“I hope you’ll understand if I don’t make the connection for you.”

Ricky nodded. No doubt, he had done this before. Ricky was a rentboy — a prostitute — who specialized in catering to the needs of men in positions of great power, men who could be brought down by the mere mention of a gay sex scandal. I didn’t know all of Ricky’s clients, didn’t know if I even wanted that knowledge, but a senator had passed his name and number to me when he had figured out what I was yearning for. That senator said he didn’t use Ricky anymore, but had very fond memories of him.

“Yeah, I understand. You have a first name, though? Something I can moan in the throes of passion?” He unzipped his jacket, revealing a tight red shirt underneath — it hugged his slender frame and emphasized his pecs.

My mind tumbled in panic. If I gave him my name, he’d know who I was, and that would be the first step to the end of everything. But the rational part of my mind broke through — Ricky had signed a nondisclosure agreement and came highly recommended by a man who had almost as much to lose as me.

“Dan,” I finally said, voice barely more than a whisper. Few people called me Dan, most preferring my full name, Daniel. It felt right, though, that I would give Ricky a more intimate form of my name.

Ricky arched his eyebrow again and he looked me up and down. He still seemed to be struggling to make the connection of who I was. Eventually, he seemed to give up. Shrugging the jacket off his shoulders, he tossed it onto a nearby chair.

With the jacket off, he seemed even slimmer and younger. The shirt clung tightly to him, leaving nothing to the imagination, but still somehow making him even more tantalizing. The bottom of the shirt seemed to end a half-inch before the top of his jeans, giving me a glimpse of the rich brown skin of his Latin heritage. And his jeans hugged him as tightly as his shirt — I could almost see the outline of his bulge. When he noticed me looking him over, he did a little circle for me, giving me a glimpse of his astounding ass. It looked round and firm, filling out his jeans perfectly. I couldn’t wait to slide my tongue between those cheeks, to make him wet before I pushed my cock in there.

I stood up and crossed the room to him. He was a good six inches shorter than me. I wanted to reach out and touch him, to pull him close and shove my tongue down his throat, to grope him and make him moan, but I was suddenly overcome by nervousness. If only the public could see me now — not only for the supposed moral depravity of the situation, but for my sudden meekness. I wasn’t known as a weak-willed man.

Instead, I walked in a slow circle around Ricky. I could smell him — clean with a hint of scented soap. He was a feast for every sense so far — but I still had to know how he tasted and how his skin felt against mine. Fuck, I was straining in my briefs.

When I came around to the front of him again, he looked up at me through his long eyelashes.

“I do,” I said, feeling a little more confident. “You’re gorgeous, Ricky.”

He was young, too, but I’d had Brad double-check the kid’s ID. He was in his early twenties, just like he’d said — but with me more than double his age, he just seemed even younger, making this all the more illicit.

“Don’t you want to...” he paused to tilt his head back and lick his lips, making his mouth seem plump and moist, and exposing the length of his slender neck, “kiss me?”

That was all the encouragement I needed. I put one hand behind his head and the other at the small of his back and pressed my lips against his. He kissed me back hungrily and soon our mouths were open and my tongue was brushing against his. Ricky seemed to melt in my hands as he pressed against my body, succumbing entirely to me and my will. I slid my hand down the back of his tight pants, groping his bare ass cheeks. They were smooth — exactly as I expected of him.