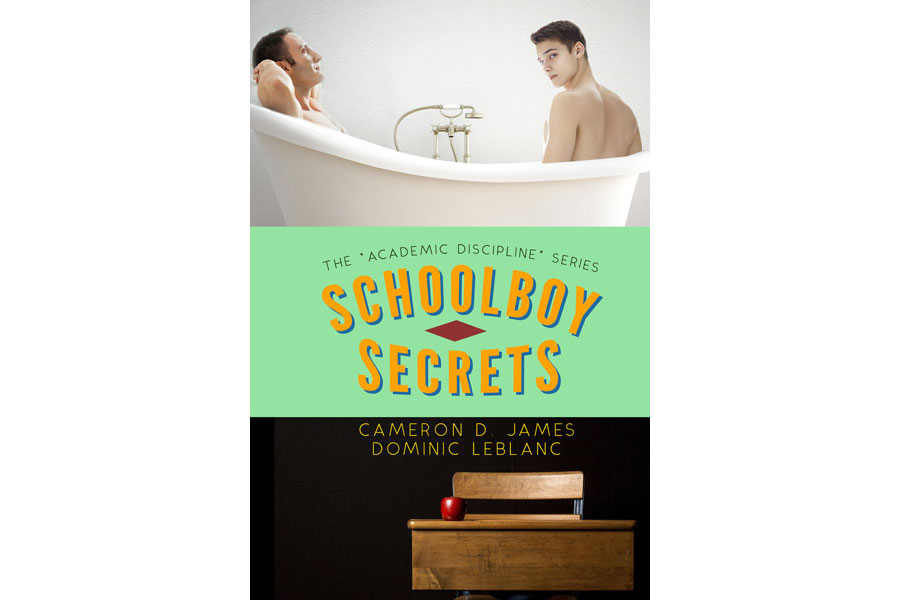 Now that Evan is eighteen, the first thing he wants to do is go to the bathhouse. He’s gay and a virgin — and so the bathhouse seems like the perfect place for him to go on a Sunday afternoon. He makes his way through the place, eventually finding himself in a hallway shrouded in total darkness. He brushes up against a body, likes what he feels, and has his first gay experience then and there with a man he can’t even see.

As he heads out of the bathhouse, he runs into the last person he expects to see — his gym teacher, Coach Miller. And it doesn’t take long for Evan to connect the dots and realize that it was Coach Miller that Evan had done stuff with in the dark.

The situation is tricky — he had sex with a teacher — but there’s one thing Evan can’t deny. He enjoyed it. And he wants more.

I lingered at the coffee shop, watching the non-descript building across the street. Every time the door opened and a man entered or exited, my heartbeat surged. My coffee had grown cold as I sat there for far too long, with my leg bouncing in nervous anticipation.

It was my eighteenth birthday yesterday — my buddies had bought me a cake and we’d spent the evening playing board games. While it certainly wasn’t as wild as what most guys likely did on their eighteenth, it was the most we could do, what with us being at a private all-boys Catholic boarding school. But with my eighteenth now a day behind me, I was old enough to leave campus for short periods, and old enough to enter that building across the street.

My heart skipped a beat as the door opened again and a buff man came sauntering out. I watched him as he paused to light a cigarette, inhale, exhale, and walk down the street.

If I’m gonna do this, I better fucking do this, I told myself. I got up, ditched my cold coffee, and exited the coffee shop. Every step down the sidewalk and across the street seemed to make my heart race just a little faster. By the time I approached the front door, the sound of blood rushing filled my ears and my palms had started to sweat.

I reached for the door and just before I grabbed the handle, the door swung open, making me jump back and gasp. It was almost enough to send me scampering. An older guy, maybe in his thirties, with delicious scruff, came out. He paused and looked at me, gave me a wink, and then walked down the street. I watched him go, his bubble butt swaying in those tight jeans of his.

Taking another deep breath, I grabbed the door and opened it. The small foyer beyond was dimly lit and the walls were lined with posters that had sexy men in their underwear. A little trap door opened and a face peeked through, eyeing me up and down before buzzing me through to the actual entrance.

Along the wall to my left were more posters of men wearing next to nothing and to my right was a long desk where the man who had peeked through the little door stood. I stepped up to the desk.

“Can I see some ID, kid?” the man said, his words carrying a whistle due to having a large gap between his front teeth.

Just past the desk, a buff guy wearing only a small, white towel wandered by, eyeing me up and down before turning down a dark hallway. I watched him for as long as I could see him, but he eventually disappeared from view.

“Kid? Your ID?” the older man said, another whistle rushing through his words.

“Right,” I said, and pulled out my wallet. I fumbled through it, digging out my license, then passing it over to him. He glanced at the birth date and then passed it back to me.

“Happy belated birthday,” he said. He put his hands on the counter and leaned forward a bit. He was an attractive man. I think the light was aging him a bit — I originally pegged him at about fifty, but closer up, he really looked more like mid-thirties. “You’ve never been to a bathhouse, have you?”

I shook my head, hoping that the jerky movement didn’t telegraph my overwhelming nerves.

“You sure you want to jump into this right now?”

He looked at me a long moment, like he was deciding whether to actually let me in or not. Eventually, he turned around, grabbed a towel from the pile behind him and put it on the desk in front of me. Then he reached for a key off a rack and placed it on top of the towel.

“Your admission is on the house. Call it a birthday present,” he said.

He leaned forward on the counter, resting on his elbows. “I’ll run you through the basics. Lockers are right through there,” I looked where he was pointing, “and you’ll want to get totally naked, wearing only this towel. You’ll find a hot tub in the back, as well as a maze in total darkness, glory hole booths, a hallway lined with private rooms, and a sauna. You can have sex anywhere and everywhere — in a private room if the guy rented one or totally out in public. Just not in the hot tub. You shoot your wad in my hot tub and you’re out the door.”

I watched him as he spoke, trying to process all of this information, but I found it was all overwhelming me, making me wonder if I really should’ve just turned around and walked out. No, I told myself, if I walk out, I’ll just come back tomorrow when I’ve screwed up enough courage again.

“Kid?” the man said, pulling my attention back to him. “The most important rule, above everything else I’ve just told you, is that you have the right to say ‘no’. If somebody starts fondling you or sucking you and you don’t want it, just tell him you’re not interested. If he gives you trouble, you come to me and I’ll take care of it.”

“Thank you,” I said. That managed to calm my nerves quite a bit. I could just say no. If I wanted to, I could just spend time here and not touch another man at all. Like I’m going to get out of here without getting some dick, my sarcastic self said in my head.

I picked up the towel and the key, which was on one of those elastic coils that I could wrap around my wrist or bicep. I followed where the man had pointed, finding a room of lockers at the end of the hall. I wasn’t alone. Two guys were getting naked. I stood in awe of the sight; two well-built and well-hung men were dropping their pants and their boxers. One of them caught me staring and winked at me — and before wrapping his towel around his waist, he turned slightly so that I could get a better view of his glorious cock. Moments later, they both had a towel wrapped around their waists and they walked out of the room, hand-in-hand.

When I was alone, I then realized just how fucking hard my cock was. If I wasn’t careful, I was going to shoot my wad within the first few minutes of being in here. I held my breath for a moment — a classmate had told me that if I get an awkward boner in class, holding my breath for ten seconds will get rid of it. I counted to ten, then started breathing again — my boner wasn’t gone, but it was a little less stiff.

Still, habits died hard. I cinched the towel around my waist, locked the locker, and strung the key around my wrist.

I awkwardly held my arms in front of my body, as if to hide my near-nakedness, and wandered back down the hallway toward the front desk. The man at the desk nodded encouragement at me, even as his eyes roved hungrily over my body. I came to a fork in the path — if I remembered right from what I’d read online, the hallway looped around, so it was more a matter of which direction did I want to do the loop in. The warm scent of a hot tub came wafting down the hall from my left, so I started in that direction.