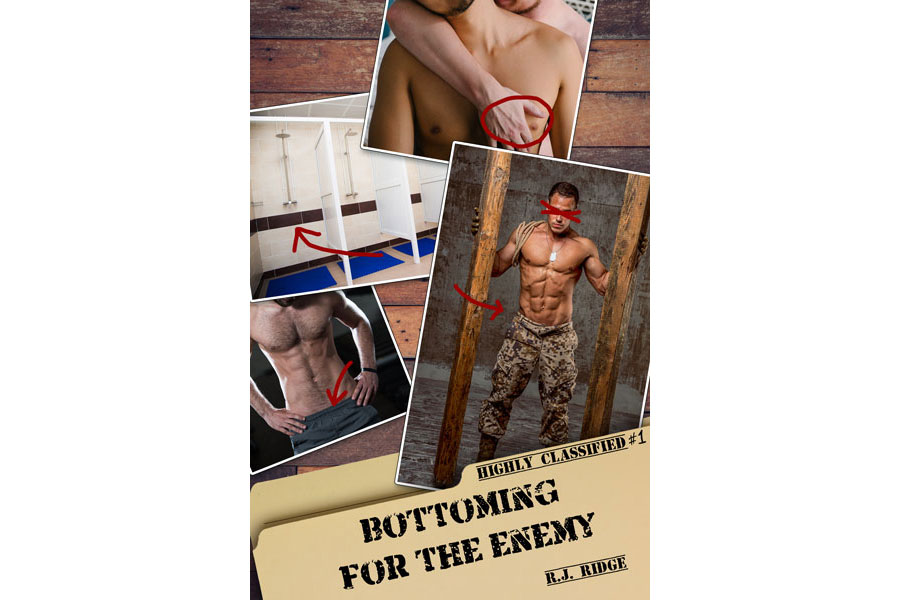 Bottoming for the Enemy is a 7,000-word short story.

Fyodor’s soapy hand was suddenly around my cock. It was small, I had not been hard like the other two, but that ended in a matter of seconds. He smiled, but blankly, as if this was just a thing he did to all his comrades, jerking them off. But fuck, it felt good. Sasha, meanwhile, was actually at the entrance, keeping a look out.

“Don’t worry,” I called over. “No one is coming here at this time of day.”

He came back, and Fyodor had got to his knees under the running water and was happily sucking my dick.

“Fuck,” I said, unsure if to hold the back of his head or do anything else but watch him as he gripped the base of my penis and worked his mouth from shaft to tip. In my couple of years in the army thus far, I had sucked a fair few dicks. Been fucked by a number as well. Always secretly, always after extensive surveys of quiet bathroom blocks, long, tired nights of cruising, and often shaken heads and men turning away from me as I offered my mouth or ass for them to use once or again.

“Fuck me that’s good.” Sasha was standing beside me now, starting to run a hand over my chest, down my abdomen, then around to my ass and squeezing each cheek. I kept my hands on my hips as I thrust into Fyodor’s willing mouth, careful not to push too far and choke the poor lad, but enough that I could feel a rising from my balls.

Sasha’s cock looked just as delicious and large as the one now resting on the tile between Fyodor’s legs. I broke an invisible barrier and reached out to touch it, wrapping my hand around a hefty, white shaft, smooth and polished and uncircumcised. Most Brits were not either, while most Americans were. For some reason I was, and the extra skin fascinated me. I slid back the foreskin around his cock as he grinned in appreciation. My natural instinct with a cock in my hand was to lean down and put it in my mouth. But something about these boys felt different. Fyodor at least seemed determined to get the entirety of my chubby seven inches all the way down his thin throat. His Adam's apple pulsed as the tip of my dick caused him to choke.

I wondered what Adam’s apple would be in Russian. But only for a moment. Sasha’s dick was standing straight out, the skin twisting and twirling at the tip, and I leaned over to gulp it down to my Adam’s apple.

A deep, Russian groan emanated out of his throat as I sucked from the odd angle of being sucked at the same time. A few words of Russian came from Sasha, directed at Fyodor, while Sasha’s hand fingered down to my ass. The vaguely familiar feeling of fingers exploring the gap between my cheeks, then the roundness of my hole. Much like the guns on base, they were fingered regularly, but hoisting it up and firing a shot was another matter.

Sasha seemed determined to make a bullseye hit. One wet finger breached the outer rim of my body as Fyodor popped off from my dick, still holding it, and replied to Sasha: “Da.”