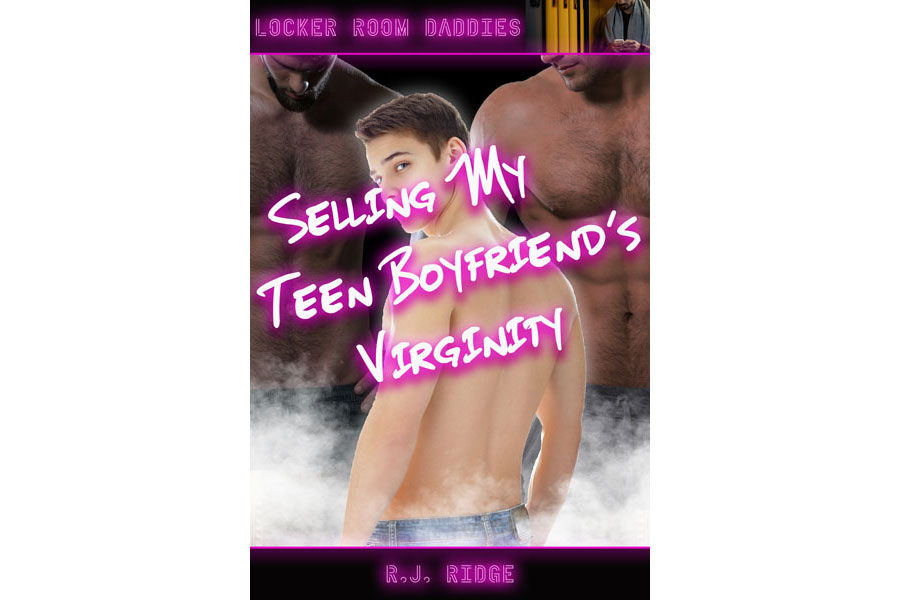 Frankie and Alejandro are on the run after a horrific evening with Alejandro's father. But Frankie has a plan to get these two teens off the street: he's going to manipulate the daddies at the local gym. But it seems the daddies have their own ideas for the boys, whether they like it or not.

Selling My Teen Boyfriend's Virginity is a 16,000-word short story

“First thing’s first,” Harlan said, happily looking down his bespeckled nose at both of us. One leg was crossed against the other, dancing gently as if our lives weren’t in the balance. “I am to be addressed as Sir at all times. Understood? As is any gentleman who accompanies me.”

“Yes…Sir,” said Alejandro, gulping out the salutation like he’d never said such a thing in his life.

“Wonderful. Now boys, on your knees.” Alejandro glanced my way, unsure what to do even though I’d dropped to one knee already.”

A flash of anger cut through Harlan. He snapped his fingers and pointed to the carpeted floor. “Rule two. Do as I say, when I say it!”

That was enough for Alejandro to sail straight down. We knelt, hands behind our backs. Execution style.

“Good. Now I can see you boys properly.” Harlan peered through the glasses on the end of his nose.

Alejandro looked as uncomfortable as I’d ever seen him. So obviously on display.

“Lift your arms, son,” Jon said to Alejandro, sliding to the edge of his chair.

Alejandro did so, quietly gulping at the same time. His biceps were on full display. The muscled shield of his chest and armor-plated pecs flexing with the movements.

“Keep them up!” Jon snapped. “When did you first have hair under your arms?”

“Um…I’m not sure. Thirteen, fourteen?”

“Uh huh.” Jon was already on his feet, holding one of Alejandro’s arms up like a catch of the day.

“That tickles!” Alejandro squirmed as Jon poked at both of his pits. He drew two fingers under his own nose, sniffing in Alejandro’s scent. Then he offered a snifter of his fingers to Harlan, who nodded approvingly. Abdul was next to join in the strange ritual. He wandered over but didn’t bother with Jon’s fingers. He yanked up Alejandro’s arm and took a deep sniff of the hairy armpit himself.

I quickly took a sniff of my own pits, feeling a tad left out. The men ignored me. They were too busy admiring Alejandro from every angle.

“Penis, please boys. Both of you.” Harlan said it like a school principal demanding the key to a naughty boy’s locker.

Jon and Abdul both stood waiting with all seriousness, arms folded. This was the part Alejandro had clearly been dreading.

I offered a quick half smile and took the lead. I was the opposite of hard. I yanked down my shorts and underwear to my thighs, then pulled up the tank top I always worked out in, holding it under my chin.

The men rubbed their chins as they stared at my exposed body. My cock as soft and flaccid as someone waiting to be prodded by a doctor. I’d shaved only a few days before, so my dick sat beneath bare skin, not even flopping between my thighs, just there like a button on an espresso machine.

It was Abdul who came forward. He squatted down in the manner of a father about to tell off a tantrum-prone child. His big, brown, hairy hand reached out, a gold sovereign around his pinky. He held my balls in his hand, gently fondling like this was a physical. I shivered in a breath as one ball was squeezed, then the second, then the sac tugged on. I expected to have to cough next.

“Seriously?” But a cold look stopped me in my tracks. I glanced away from Alejandro and forced out a dry cough. Satisfied, Abdul glanced over my shoulder at my bare buttocks. He reached around and cupped each smooth cheek, forcing me to suck in a noseful of dark-skinned scent. Black tea and desert sun. Mint and natural musk. I felt my dick get harder. Not much, but enough to not be utterly embarrassed. I knew what was coming next.

Abdul took the liberty before Alejandro could move a muscle. He yanked down the shorts to reveal my black jock strap. But that didn’t faze him. He pulled that down as well.

“Inshah-allah!” Abdul cursed, falling backwards to Harlan’s feet. Shocked, both he and Jon helped Abdul up before the noticed the unfurled dick they’d unleashed.

“Is it real?” Jon asked, in all seriousness.

I gulped, knowing the grown-up version had been forced inside me less than a day ago. I knew this was the ace in my hole, but I couldn’t help but think this was the wrong way to cement a relationship between Alejandro and me.

“Do you have an erection, son?” Harlan asked.

I saw Abdul bite his bottom lip. Harlan gazed on in quiet wonderment, but it was Jon whose eyes seemed to flash with dollar signs. He whispered something incomprehensible to Harlan, who grinned.

“Lift up your penis, please.” Harlan crouched down, shifting his glasses up.

Alejandro complied, the head of his engorged cock pointing above his belly button. Harlan gave his balls a light tap like a kitten, and Alejandro immediately trembled at the tap.

Read the rest of the Locker Room Daddies series