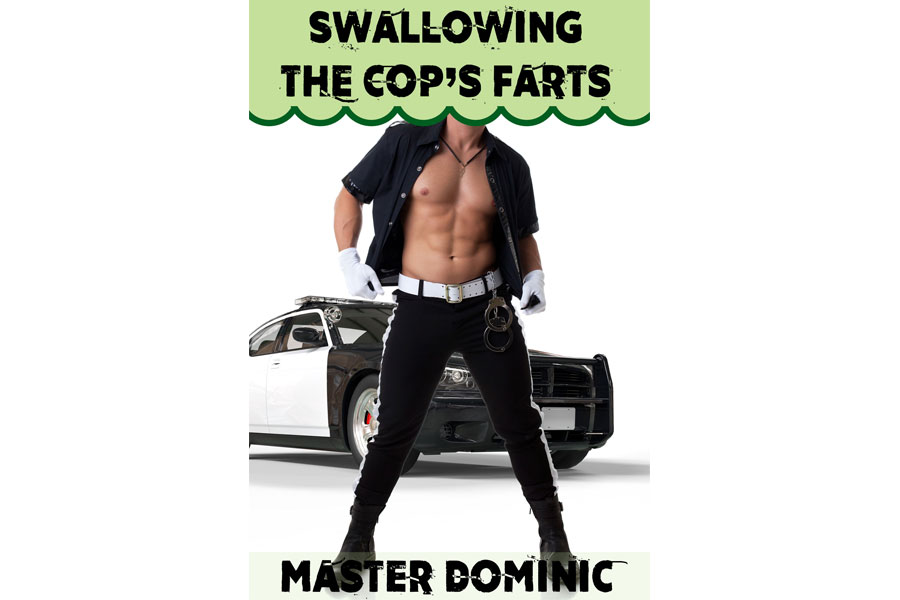 Nick is trying to sell some concert tickets he can’t use when he gets picked up by some power-hungry cop who accuses him of scalping. If that wasn’t bad enough, now he’s handcuffed in the back of the cop car and the cop isn’t driving anywhere. He’s just sitting there, farting. The car is filling up with his noxious fumes.

Enough is enough and Nick asks him to stop. But this power hungry cop doesn’t take orders from a handcuffed twink like Nick, nor does he take kindly to Nick himself. What ensues is a sexual encounter that awakens Nick’s most deepest, darkest, and shameful desires — fart swallowing, sexual humiliation, and total subservience to this powerful Alpha Male.

It’s degrading. But it turns Nick on like nothing else ever has.

I shuffle in the back seat of the cop car, my hands awkwardly cuffed behind me. In the front seat is some muscle-bound but air-headed cop with a bad case of farts.

All of this is because I tried to sell some concert tickets I couldn’t use — this cop, who obviously needed something better to do, accused me of violating some obscure scalping law. I’m no fool, I know my rights, so I stood up to him and told him as much.

And a moment later I was pinned to the dirty concrete, cuffed, and accused of resisting an officer of the law. A moment after that I was thrown in the back of this power-hungry pig’s cop car. Now I’m stuck here while he ignores me and continues to fart, stinking up the car.

He lets out a long squeaker — he’s not even bothering to hide it anymore — and soon I’m gagging for oxygen. What makes it worse is that we’re not even going anywhere. We’re just sitting in the car, stewing in his noxious ass fumes in the middle of a sunny and sweltering July afternoon, ten feet from where I was arrested for scalping.

I start breathing through my mouth to avoid his noxious farts and the growing stink of his B.O. I can’t inhale it anymore or I’m going to vomit. I watch him in the rear-view mirror, trying to figure out if he’s enjoying this or something.

“Can we crack a couple windows open?” I ask, trying and failing to keep the irritation out of my voice. He shifts his eyes to glare at me in the mirror. “Please?”

In response, he leans to one side and lifts an ass cheek off his leather seat and lets a loud, vibrating fart rip through the air.

“Surely this counts as cruel and unusual punishment,” I mutter, ensuring I’m loud enough for him to hear. When I glance up at the rear-view mirror, I find him glaring at me. “What?” I say, putting far too much challenge into that word than I really should.

I roll my eyes and look away.

“Hey!” he shouts. For some odd reason, the power in that one word sends a shiver through my body. I look back to the rear-view mirror and meet his glare. “Don’t look away unless I tell you to. Understood?”

Something has shifted between us. I can’t put my finger on it, but something is suddenly different. He’s got more power and authority and I, well … his glare is doing something to me. Like, in my pants.

“I said, understood?” He hardens his glare and he almost bites off those words.