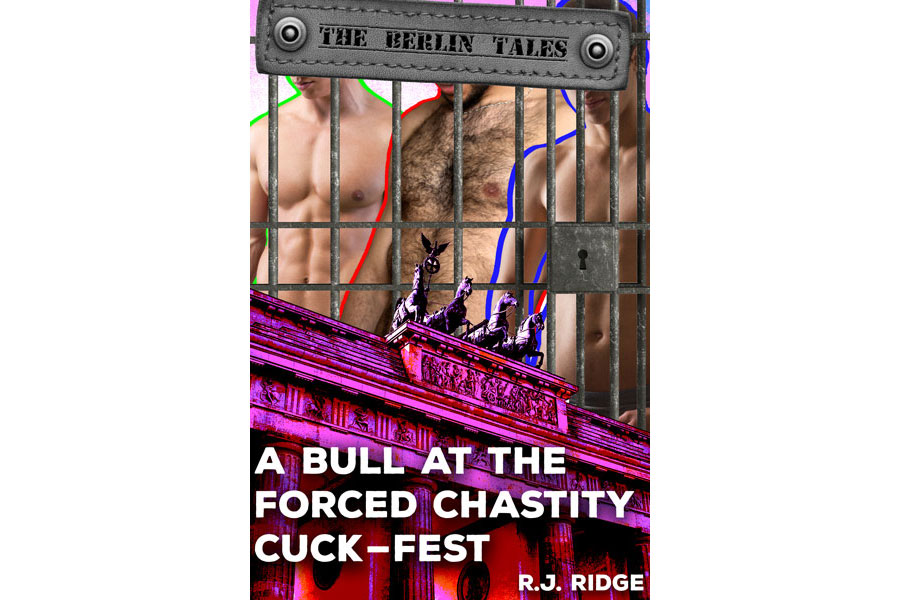 Peter is shocked to learn of the depth of Karl and Tomas' forced cuck relationship, manipulated by the powerful Richard, who is also Tomas' keyholder. With Tomas on the verge of freedom after months of chastity, Peter is set a gargantuan task of impressing Richard. But can he unlock Tomas while saving this cuck couple from even greater humiliation, while still having a shot at joining the illustrious Antinous Society?

A Bull at the Forced Chastity Cuck-Fest is a 10,500-word short story.

“Meet Lukas,” Richard said, taking the young man by the hand and bringing him within smelling distance. “He’s just like you, Peter. Another potential recruit into our most noble and ancient society. He works for one of my television networks in Denmark—”

“Oh, that’s right. Anyway, his boss is also, shall we say, beholden to me.” Richard shook his bracelet, the silver keys dancing in shards of sunlight bouncing off the pots and ornaments and glasses waiting to be drunk. I had the pounding sensation we were not alone. “Two strapping young men stand before me. I wonder which one will win my affection?” With a giggle, Richard bounced to the back of the room and sat on his chair as tall as a throne between two stretches of low couches. He clapped his hands. “Enter!”

From all sides, secret doors opened. Paintings and tapestries swung in the forced breeze as well-dressed men entered Richard’s domain. It might feel like the final scene of an action movie, but these men weren’t carrying guns. They led in other men—naked men—wearing thick white hoods, hands roped together, and a collar around their necks with the attached chain held by their suited companions. Solemnly, they entered to my gawking shock, and even Lukas’ wide-eyed wonderment.

Each well-dressed man, their ages and features as diverse as the Antinous Society itself, and in fact I recognized a few, led their naked companion to a different pouf or couch at the front of the room. Eleven couples came out in total. No, twelve. The last one rushing out of the secret door farthest away stole my breath away. Karl came out in a waistcoat, his eyes to the floor, leading a hooded, naked Tomas into the open room.

Tomas’ hairy, ample body waddled anxiously through the path that Karl led him. The metal chastity cage glinting in the sunlight, just like the rest of them, I suddenly realized. Every one of the naked, hooded men being helped by their partners to climb onto their stations had the exact same metal cage swallowing their cock. But their partners were doing something to it. From pockets they pulled out condom wrappers, tore them open, unrolled the rubbers and stretched the condoms over their partners’ caged cocks. In the far corner, Karl bent down and did the same thing, tucking the rubber over Tomas’ hairy balls as well, before planting a small kiss on his belly. Karl then helped him climb onto a green chintz backless couch, creaking under his weight, hooded head bent down and chain flapping over the armrest. Once each of the twelve naked men was in place, asses—some smooth, some hairy, some black, some white—all in the air, their partners retreated to the line of seats on either side of the imperious Richard. Most took a filled glass and sat, legs crossed, expressions low like an Italian funeral. Only Richard was happy. He grinned at Lukas and I, then jumped out of his throne.

“It’s your lucky day, gentlemen,” Richard said, dropping his silk gown and revealing his tight muscled body, leather cuffs, and silver bracelet. He grabbed a wide gold goblet from a table and spun it between his fingers as he addressed his hooded guests. “After three months, four months, six months for some, you’ve each earned the right to have your cage off.” He scraped the edge of the goblet along some of their bare backs. “But first,” whimpers escaped from the hooded bodies. “Your husbands are going to sit here and watch you once dominant gentleman get fucked in the ass.” Shaking came with the whines; asses of men, powerful men, clenched tightly as Richard ran his fingers around their backsides.