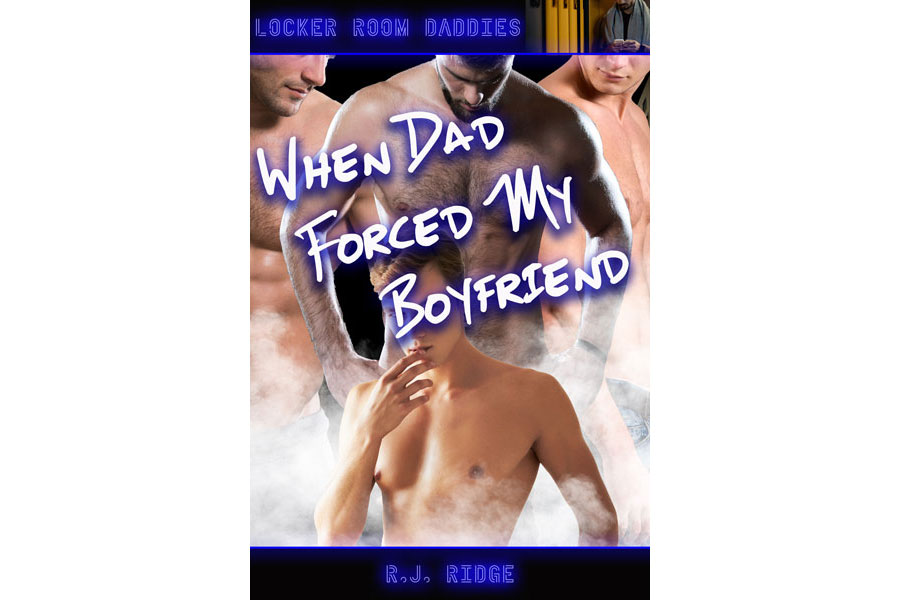 Alejandro has just turned 18 and has been shipped off to live with his estranged dad who forces his son to toughen up at Hadrian's gym. But it's in the locker room that Alejandro meets young Frankie, and the boys explore their young love in the locker room showers. That is until they're caught in the act, and once Alejanadro's dad learns of this shame, he'll stop at nothing to teach his son a terrible lesson.

When Dad Forced My Boyfriend is a 12,000-word short story.

Frankie took my hand and guided it straight between his ass cheeks. Whatever nerves I might have had about touching another man’s ass for the first time melted away as I stroked the soft, hairless edges, playing with the fountain stream running between them. This wasn’t any strange man’s asshole. This was Frankie. I’d known him for an hour but knew him deeply by touch. My finger danced around his hole, knowing I wanted in but not quite sure how to do it.

Frankie helped. Our mouths parted, and he grinned at me widely, holding my one hand with both of his as he edged backwards onto my hooked finger. Those wide eyes flickered just as I’d imagined.

“Mmmm,” came his response. Mouth sealed tight as he reached back to my epic dick between us, stroking it like Aladdin unbelieving he’d come across a genie-stuffed lamp.

“I told you it got bigger.”

“I’m not gonna lie to you, Alejandro. I’ve no idea if this will work. But I need you.”

“It’s okay.” I hugged his head into my chest. “I just like being with you. We don’t need to rush.”

But Frankie was already turned around. He lathered up with a handful of shower gel from the dispenser, slathering both my cock and his ass with it. I didn’t know what to do or how to help. But I held onto his hips, tightly as if he might slip and fall from the odd angle. He was arched forward, the only thing he had to hold onto the flat tiled wall. So, I held him. My cock resting on his back above his ass. As big as a forearm and a fist. I touched his hole again, slippery now from the shower gel.

“You’re so tight, Frankie. There’s no way I can fit. We don’t have to do this now.” But Frankie was already angling my dick straight onto the littlest of openings. “Frankie, you don’t need to do this. Honestly.”

My protesting ended at the very moment the head of my dick breached his perfect hole. True, I’d only had an orgasm with my own hand, but the very touch of skin against skin was better than every self-inflicted masturbatory emission throughout all my life. I was nearly the one to fall, as Frankie reached behind to hold my body back from going any further.