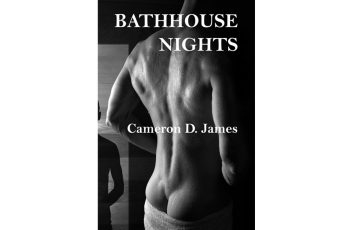 In the bathhouse, anything is possible, especially at night when all the studs come out to play.

For cheerleader Daniel, his dream-come-true is a football jock named Justin, but no one in the bathhouse measures up, no matter how hard he tries to play pretend.

Justin is straight, of course. Aren't they all? There's no reason for Daniel to expect he'll score with him...until the night he spots him in the hot tub.

This must be a trick, or maybe I’m hearing him wrong.

And then he kisses me. He presses his lips to mine and thrusts his tongue in my mouth. He crushes my smooth chest against his hairy pecs and I wilt in his arms.

This isn’t a trick. This is real. We’re in a bathhouse, we’re naked, and he’s groping me.

He lies back on the bed and pulls me with him.

“Uh-huh,” he whispers, as though he’s not the one whose muscled arms are holding me captive.

He makes a husky sound and it drives me wild. I kiss him, I taste him; I run my tongue down his neck. He arches his back and moans, driving his crotch hard against mine.

THEN
The change room was an uncomfortable place for most guys on the cheerleading team. Macho football players crammed together in the small space, teasing and taunting us, sometimes stealing our underwear. They called us “queer” and “faggot” as they loitered buck naked, pretending to be “men”. But I loved it. I always crammed in with them as soon as I could, ignoring their insults while I secretly eyed their muscled nudity.

I yanked off my clothes and walked naked to the showers. I grabbed a clean towel, but paused by the laundry cart nearby. Though I might have missed the show, that didn’t mean I’d miss some action. Fuck, no. This was my favorite part.

I slung the clean towel over my shoulder and grabbed a dirty one from the cart, pressing it to my face, inhaling the sweaty stink of some random guy. My cock went stiff. I thought of that anonymous guy squeezing his ass cheeks together, the way his buns knotted with muscle each time.

Mmm. I kept sniffing. My hand found my dick and I jerked it, thinking of those cheeks parting for me. I’d lose my load in no time like this. It always worked.

The soft hiss of a shower hit my ears. I paused; someone was still here. I tossed the dirty towel back.

I tiptoed until I stood half behind the edge of the tiled wall, enough to see who was here, but enough to hide my hard-on.

I took in the yummy bulge of a hunk’s ass, soapy water cascading down its curves and along the crack. A guy’s ass mesmerized me, but the sculpted buns of a football jock drove me wild.

It took me a moment to register that this was Justin, captain of the football team—Vicky’s boyfriend. He was one of the players who was actually nice to me.

Justin. Oh, God, how I could go for Justin. I bit my lip, all but grinding my cock against the shower tile as I watched how the water flowed over his piles of muscle, how the soapy streams veined his ass.

He turned slightly, enough for me to view his side profile, but not enough for him to see me. Mmm—he was hot! His front was even more beautiful than his back. His pecs bulged, his torso tapered at the waist, his abs rippled; his dick and balls swung low and heavy between his legs.

I looked up. Justin was staring right at me.

“Uh...hey.” I pretended I hadn’t been standing there spying his glorious package. I yanked the towel off my shoulder and folded it in front of me, hiding the boner I sported. 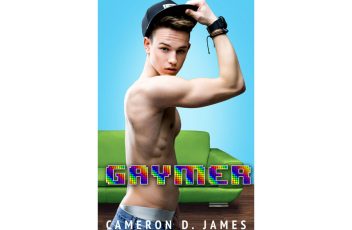 Since start of term, Carter has been secretly lusting after Zack, a quiet twink with smooth arms, geeky charm, and enticing proportions. When Zack invites himself over for retro video games, Carter waits and hopes, but the dreaded "game over" approaches. He has to do something -- anything -- to get a shot at tasting this delicious young man.

Out comes a strategy to save a gaming disaster. If Carter's wrong, he might get a black eye, but if he's right, then this session's about to level up to something better than his wildest fantasy.

“We’ve got to turn this around,” Zack says. He picks up his controller and gives the level another try.

Now I’m watching him and only him. I chew my lip, captivated by his gorgeous face, his rosy cheeks, his brown eyes behind his geeky glasses. God, he’s smoking hot, every bit of him.

Zack loses another life, and the game switches back to me. “You’re down to your last guy. After this, it’s over.”

Yeah, after this it’s over—both the game and Zack sitting next to me. Soon I’ll be alone, jacking off, wiping up my load with a pathetic wad of Kleenex. A cold sweat breaks out on my forehead.

Zack looks at me. His lips are moist after a fresh swig of pop. He looks so innocent, but his brown eyes gleam with something else…

Fuck, this better work. “I have this fantasy.”

He doesn’t reply. He just stares at me.

I chuckle awkwardly. “I’m just kidding, but, I mean…who knows? I’ve heard it works, on the internet…uhh…something like that. It’s supposed to relax you. But, uh, I don’t mean you have to blow me, I’m just saying it might work, or…fuck, I don’t know what I’m saying. It was supposed to be funny. Forget I said anything.”

Zack’s staring at me like he’s figuring out the quickest path to the door. He adjusts his glasses again, cheeks darkening with a blush. “If I blow you, then you have to blow me on my turn.”

I run through those words, over and over, trying to figure out if I misheard or if I’m missing the sarcasm or something. The more I replay the sentence, though, the clearer it becomes that Zack is serious. My cock leaks, my cheeks warm with their own blush, and my pulse pounds in my ears. I try to force everything down, to appear cool and calm, as if I hadn’t been dreaming of this moment for weeks now.