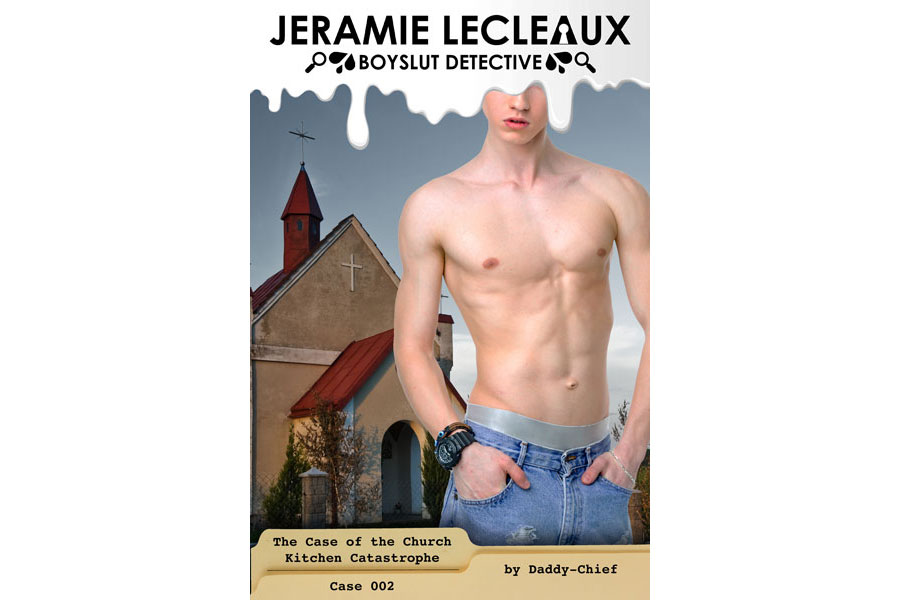 Jeramie Lecleaux is an eighteen-year old teen detective and slut puppy. When trouble strikes, he uses his sharp eyes, clever wits, and well-trained boypussy to root out clues and interrogate suspects.

A fire at the local Baptist church on a Sunday morning would be scandalous enough, but someone made off with the church cash box. Once the smoke clears, Jeramie is on the case. Can the boyslut detective track down who took the latest tithes while having several of the older men in the congregation scratch his needy itch?

The Case of the Church Kitchen Catastrophe is an 11,000-word short story.

Mr. DuPree was dressed in his usual Sunday suit, a pair of slack pants with shined shoes and dress socks. A slick coat covered a blue button-up shirt. His tie hung out at the moment, as though Mr. DuPree had been worrying with it. His brown beard had a few flakes of white, and he had a slight paunch sticking out in front.

Overall, though, Jeramie thought Mr. DuPree was quite handsome, in his own way.

“I wanted to ask you,” Jeramie began, “if you had any peppermint. I’m fresh out.”

Mr. DuPree always carried peppermint around. He claimed that it helped him sit still during church services. He kept plenty in his coat pocket, and would offer it to anyone if they asked.

Jeramie waited, watching Mr. DuPree closely. The first pocket he checked was empty, but the second one had several pieces. Mr. DuPree pulled out a fist full and held it out for Jeramie to choose.

Jeramie reached for the pile in Mr. DuPree’s hand, then hesitated. The movement was on purpose. He looked up then, right into Mr. DuPree’s vivid blue eyes.

“You know,” he said, “I found a piece like these in the kitchen.”

Mr. DuPree’s fingers closed around the handful of peppermints. His hand jerked back reflexively. Jeramie took note of the movements and smiled, giving Mr. DuPree another one of his cherubic grins.

“I…” Mr. DuPree began, sweating. “You shouldn’t have been in there, Jeramie. Not after a fire. It’s very dangerous.”

Jeramie’s smile widened. “I was helping my Dad,” he explained, pretending to look sad at the admonishment. “Besides, it wasn’t a real fire. Just burned meatloaf.”

“Funny, though.” Jeramie moved in closer, pretending to go for the peppermint again. “The oven was still warm.”

Mr. DuPree’s eyes widened. Jeramie saw his opening, and moved his hand past the peppermints. His fingers went for the front of Mr. DuPree’s slacks. Mr. DuPree let out a soft gasp as Jeramie wrapped his small digits around the older man’s cock through the soft fabric.

“Like the oven had been turned up on high,” Jeramine continued, as though nothing out of the ordinary were happening.

Fresh sweat popped out on Mr. DuPree’s forehead. His mouth hung open, and his breath deepened. Mr. DuPree stared in shock for a moment while Jeramine’s hand worked his shaft up and down through the front of the older man’s slacks.

Jeramie could feel the shaft growing thicker, harder, in his hand. “You shouldn’t…” Mr. DuPree stammered. “Jeramie, that’s very wrong, you know! I could get in trouble!”

Mr. DuPree was doing his damnedest to sound authoritative, but it had no effect whatsoever on Jeramie. He merely smiled and pushed Mr. DuPree’s hand away so he could move closer.

“I like this candy better,” Jeramie said, sinking to his knees.

Mr. DuPree remained rooted to his chair. He didn’t stop Jeramie from undoing the button on his trousers with his tiny fingers. He didn’t move when Jeramie slid the zipper all the way down, nor did he use his hands to force Jeramie away when the little slut puppy fished his cock out.

Cold air blew over Mr. DuPree’s thick shaft once it was freed. It was quickly followed by Jeramie’s hot breath. The randy teenager heated the already smoldering man cock in front of him with a few quick puffs of air. His fingers slid back around the eight inches of meat, gripping it tight.

Jeramie knew he had his suspect right where he wanted him now. His pink tongue slid out between his soft, puckered lips. The tip ran up along the underside of the shaft, sending a shiver up through Mr. DuPree’s much bigger body.

“Mmm!” Jeramie moaned, making sure it was loud enough for Mr. DuPree to hear. “Definitely better than peppermint.”

More in the Jeramie Lecleaux series 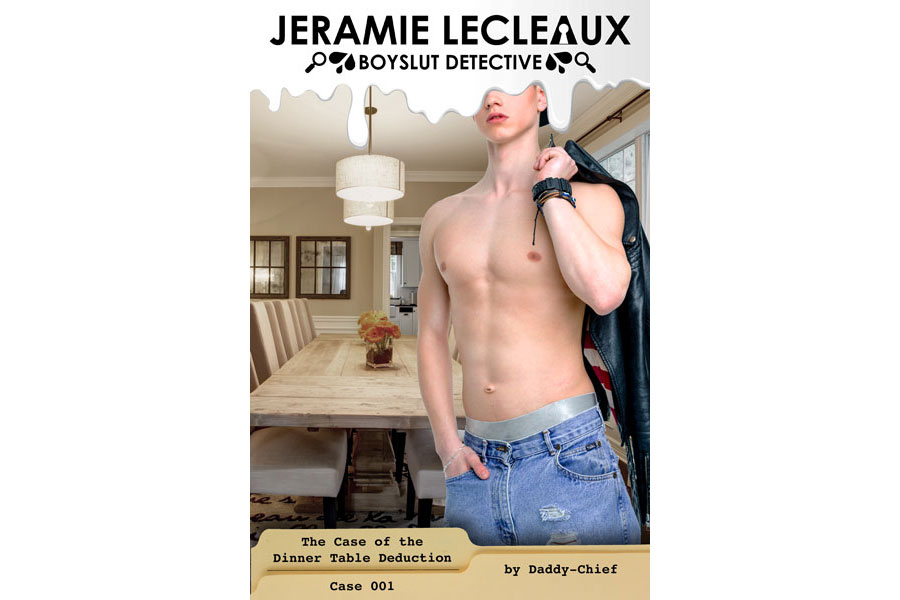 Jeramie Lecleaux is an eighteen-year old teen detective and slut puppy. When trouble strikes, he uses his sharp eyes, clever wits, and well-trained boypussy to root out clues and interrogate suspects. Detective Bryce Lecleaux is the reason why criminals avoid the small town of Pembrooke Falls.

This time, though, he’s been handed a case that is too difficult for even his deductive mind to crack. Fortunately, Bryce has a secret weapon in the form of his son, Jeramie.

The Case of the Dinner Table Deduction — Jeramie Lecleaux: Boyslut Detective is a 7,000-word short story.

“C’mere,” Daddy instructed, giving his left leg a pat once he was comfortable. “Climb up on Daddy’s lap, boy. I wanna talk about something.”

Jeramie obeyed immediately. His little legs settled across his father’s lap. One arm wrapped around Daddy’s broad shoulders, stretching as far as it could go. Jeramie’s smile was as big as a kid’s meeting Santa at the mall.

“There,” he said, grinning big as his plump little rear bounced on his father’s thick, muscular leg. “I’m all set, Daddy.”

Daddy was smiling softly as he reached up, brushing his fingers through Jeramie’s hair. “Good boy,” he whispered, combing the long honey-colored locks.

Jeramie and his father both had long hair. Some of Jeramie’s teachers told him that it made him look like a girl. He didn’t care, though.

He liked having things in common with Daddy. They both had the same green eyes and pale skin. Their faces were similar too. They each had a Roman nose, a cleft in their chin, and feet that spread slightly like a duck’s.

Certain things about them that were different didn’t bother Jeramie so much. He loved that his Daddy was so muscular. He also loved the thick hair that covered Daddy on almost every part of his big body. Jeramie especially liked running his tiny fingers through it, the same way that Daddy loved combing through his hair.

Daddy chuckled, placing a chaste kiss on the top of Jeramie’s head, one that lingered just a little longer than necessary.

“You certainly are,” he agreed. “A very curious boy. Always have been.”

Jeramie tilted his head up. Daddy’s hand left his hair, drawing the fingers out of the soft, silky locks to cup his son by the chin. Slowly, Daddy brought his lips down.

A soft moan escaped Jeramie’s throat as their mouths met. Daddy kissed his son slowly, taking his time to caress Jeramie’s lips with his tongue. A fresh shiver went through Jeramie’s body.

More in the Jeramie Lecleaux series