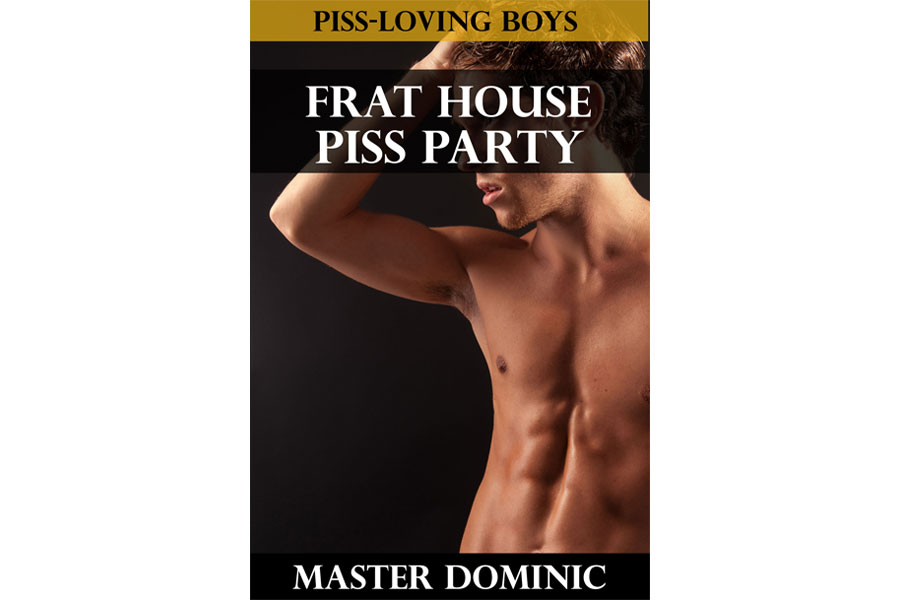 It’s Ian’s second day as a new member of his fraternity and it’s time for the dreaded initiation. While he expects something harmless like simply getting drunk and goofing off, things take a dirty turn when he finds out they know his deepest, darkest secret — that Ian is a piss drinker. The initiation quickly gets wet as Ian gets soaked by five guys — and then it gets hot, as each guy is immensely turned on.

“When we were smoking up last night, Ian said some interesting things,” Lance said.

I instantly went cold and struggled to bring up coherent memories of last night, of what I could’ve possibly told him. Nothing was coming back to me. Lance’s arm around my shoulders now felt heavy and oppressive, like a yoke on cattle.

“Oh?” Ryan asked. It was even clearer now that this was a set-up, that they knew exactly what they were going to say and when.

What the fuck did I tell Lance last night? I knew I usually talk about sex when I’m high, but, surely, that’s not what was going to happen here and now.

“It seems,” Lance said, emphasizing his Southern drawl to draw out the moment, to keep me sweating in nervous agony, “that our boy here is a piss-drinker.”

I closed my eyes and tried to hold back the tears. A hot blush flared on my cheeks. That was my deepest, darkest secret, and I’d gone and told it to someone who was going to use it against me. I was surprised I hadn’t already been kicked out of the house — there was no way they’d let a piss-drinker live with them.

“Well, now that’s interesting,” Ryan said, with a little bit of a Southern drawl of his own. I heard a bit of teasing in his tone, but not disgust. I opened my eyes, terrified to face any of my brothers again, but forcing myself to do just that. “Tell us about it, Ian.”

I looked from brother to brother, trying to figure out where this was going. Then it hit me. They were going to make me piss all over myself. And knowing the humiliation that usually accompanies hazing, they were probably going to film it and show it to everyone. I’d have to not only leave the house, but probably also leave campus. I’d have to figure out how to explain to my parents why I’d wasted all their money and didn’t even stay a term.

“I’m waiting,” Ryan said, his voice suddenly full of authority, something I’d not heard from him before.

“I…” My sentence trailed off as I struggled to figure out what to tell and what to keep secret.

“It’s okay, brother,” Lance said with an oppressive squeeze of my shoulders. “You can trust us.”

I sighed and closed my eyes — I couldn’t look at them as I spilled the beans. I’d decided to just tell them the whole thing. “Piss really turns me on — the smell, the feel, the taste. I usually piss all over myself every morning before I shower and then jack off.”

Even though my eyes were closed, I knew they were judging me. I could feel it in the oppressive silence that had suddenly filled the room. When the silence continued, I opened my eyes and looked at everyone as they stared at me. Their expressions were unreadable, but I knew the night was going downhill from here.

Suddenly, Ryan chugged back the last of his beer and stood up. “You need another drink,” he said, his eyes boring into me.

“I wasn’t talking about beer,” he said. He grabbed his fly and drew the zipper down. Reaching inside, he wrenched out his thick, heavy cock, and dangled it into his cup. A second later, the heavy sound of piss striking plastic filled the room.