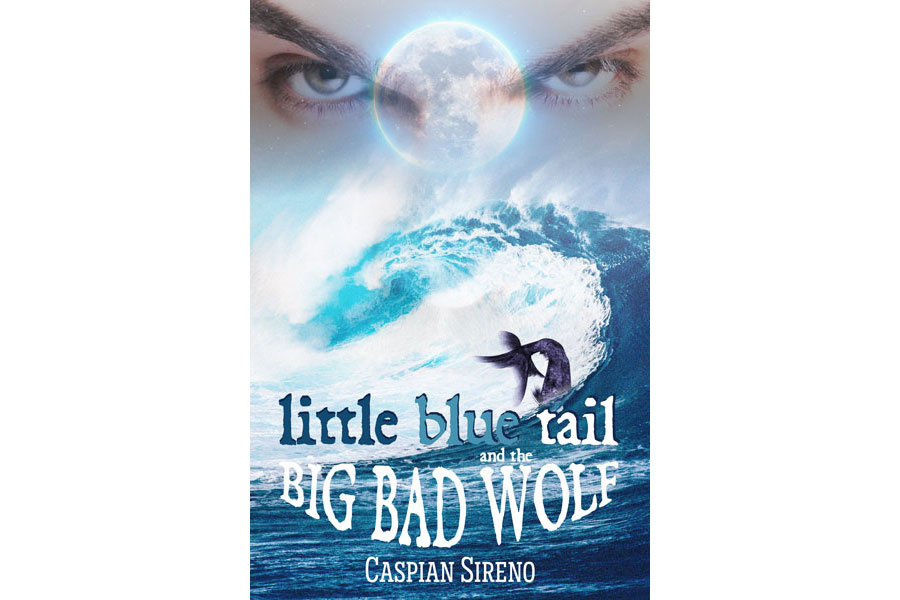 Blue Tail is a young merman with a secret desire to walk on land like people do. In desperation to make his dreams come true, Blue Tail strikes a deal with the sea witch—she gives him legs, but for an undisclosed steep price.

Blue Tail is soon captured by a crew of hungry wolves on a ship. While Blue Tail should feel fear and terror, he instead feels something…pleasurable. And this only serves to attract the attention of Captain Wolf and his whole crew, putting his life at risk. What a price to pay for human legs!

Given Captain Wolf’s keeping an eye on Blue Tail, and keeping him safe from the crew, is he perhaps not the big bad wolf he appears to be? Could he offer Blue Tail his protection?

Of course, there’s a catch. And it could change Blue Tail’s life forever.

“From a physical proximity, to a shared experience, to a permanent attachment…” Blue Tail has just this hint from the sea witch to go by. These words may not make sense to him, but they definitely make sense to his destiny.

A destiny that could make room for another existence in his life.

Little Blue Tail and the Big Bad Wolf is an 8,000-word short story.

What was this hungry man going to do me?

He stood tall and confident while ordering the other hungry men who followed him. All of them smelled like woods with a hint of musk, and they resembled the lumbermen I’d seen multiple times from the surface of the sea, probably somewhere between the ages of eighteen and twenty-five. I feared them because they were much larger and more muscular than my lean build, capable of anything and everything. I especially feared the captain of this gently-rocking ship I was captured in. Despite his being a young man like I was at twenty-one years old, he led with intimidation. He wasn’t hostile or unreasonably unfair, but he was firmly strict with rules to obey.

From a wooden post, I turned my head everywhere to get as much of a visual grasp as I could from my tied position, my skin still scratched from the pressure of the rope. My hair—damp and tousled—fell in red strings over my face like a veil. The large fishing net had won this time, much to my misery. If only I’d listened to Mother and Father not to stray far from the path to Grandmother’s grotto. I was stubborn and adventurous.

Nevertheless, if I hadn’t taken the risk of reaching the surface for another peek into the world of land beings, if only to live my own life, the outcome would’ve been different. Yet here I was, caught like the numerous fish humans typically ate, trapped with a possibly-grim future headed my way. Even the seagulls cried no more and were long gone by now, leaving an empty blue sky.

From afar, the other men looked at me with possessive eyes, mostly at my blue tail wiggling uncontrollably from my emotions getting the best of me. It wasn’t only the carnal kind of hunger the way it’d been with other men; it was also the true kind because of their rabid nature.

I didn’t want to have to use my luring ability, since I could lure either of these men with a single stare, as long as they were weak enough to stare in return, the way many foolish men had done. But I needed to escape, and Captain Wolf was my most practical target. Human or not, it shouldn’t have had to matter.

I strongly hoped that the request I’d made to the sea witch for the ability to walk on land didn’t come with too much of a price. She’d refused to reveal what the steep price was, but the moment I chose to use my luring ability was the moment I’d walk like a human. The only thing she’d hinted was that a special marking could change my life forever. But what kind of marking? Her words had been: “From a physical proximity, to a shared experience, to a permanent attachment.” It was much too vague for me to understand it.

Anyway, unlike all the other times I’d used my luring ability, the next time I used it would be my last because humans weren’t able to lure the way merfolk could.

I stared at Captain Wolf who’d just poured water over his dark hair, probably because of the summer heat. Then, he looked my way as if to keep an eye on me. Why had he captured me, and what did he want from me? I swallowed and tried to calm myself. I softened my eyes and focused on his cautious ones. I could see speckles of amber mixed with the overall brownness of his eyes, possibly with the ability to change into full amber in his nonhuman form, his natural form.

I decided to speak softly as a start. After all, I wanted to calm him too. “You’re Captain Wolf, I see.” He was the biggest and baddest of the wolves, and his being in charge made sense.

That captured his attention quicker than I’d imagined. “I am.” He remained guarded by his restricted emotions that were responsible for his huskier voice, never failing to let go of his deep glimpse of me as if making sure I’d never escape.

“You’re quite strong and virile with defined muscles, and handsome as well.”

He took heavy steps toward me in a way that caused the wooden planks to pound. “So, you sing and speak, after all. With compliments, no less.” His deep voice traveled down my spine and threatened to erect my retractable penis. But despite his enticing looks, I’d never fall the way other male-attracted merfolk had done. I was probably capable of a romantic connection with a man like any other, but such a connection came with risks, so I didn’t want it in my life. Captain Wolf was also not of my kind.

I stared into his eyes for a moment longer, forming a deeper focus. “How is it possible that you don’t have a lady in your lonely life?”

“Do you prefer the company of a man, then?”