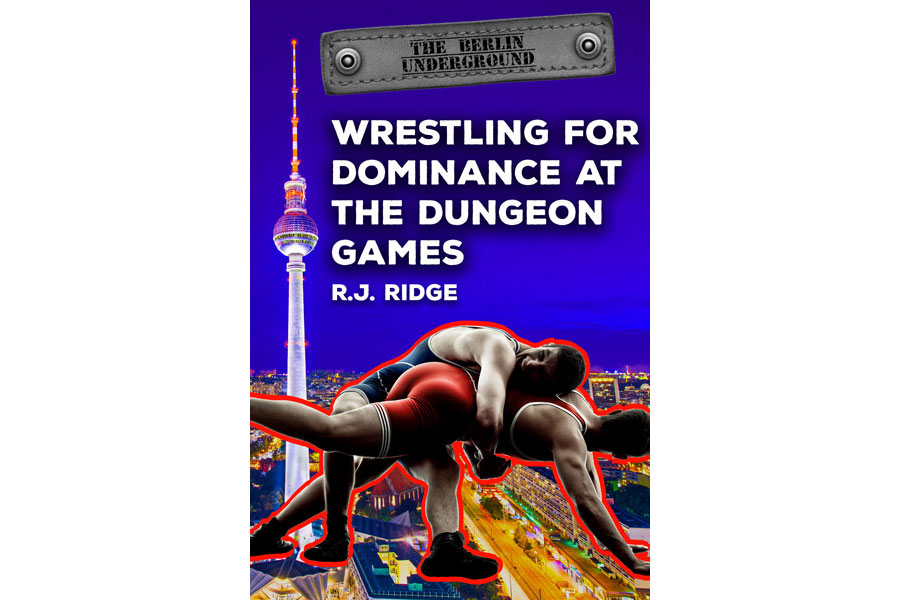 Peter is now an official candidate for the Antinous Society, but that doesn't make life any easier. As he dismisses romantic overtures from Mark, Peter joins an app to find a quick and easy hook up in the public toilets. But the man behind the divider is not just an up and coming politician, he's a direct competitor in the dungeon games, an exclusive event which will determine rankings for the coming trials to join the Antinous Society. Peter faces stiff competition at the dungeon games, forced to fight for a place as an alpha or beta. But will it even matter, as the competition's betas are expected to turn the supposed doms into quivering submissives as Berlin's fabled underground dungeon games begin.

Wrestling for Dominance at the Dungeon Games is a 12,000-word short story.

“Please welcome,” the referee announced into a booming microphone, “number two!” A round of cheers and applause—twice as loud as for me—erupted as a man jogged confidently into the ring and waved to his adoring fans. My heart plunged. Who else would it be but Andreas Bareiß. The politician waved to his fans with powerful muscled arms, smoothing back blond hair while flashing a vote-winning grin. Bareiß didn’t even acknowledge me. Perhaps he didn’t remember? Certainly he hadn’t seen me as I’d sucked his ample cock through a glory hole, and during our interview in the car, he’d spoken more into the selfie camera of his mobile phone than directly to me.

“Ranked number two in the entire dungeon underground,” the referee said, “the protege of the Dungeon Master himself will face off against the unranked newcomer for tonight’s Dungeon Games opener.” I wasn’t listening. Bareiß was doing warmups: stretching his legs and arms and cracking knuckles. I copied him exactly. Move for move, and looked like a fool in the process. I didn’t quite know what losing meant, or even what I had to do to win, but there was one seat left by the hooded and cuffed men, and one seat next to the victorious-looking ones. I knew which seat Bareiß intended to take.

“Standard penetration match rules,” the referee said, locking the hexagon’s door, with him on the outside. “You win by inserting your penis into your opponent’s mouth two times in a row, for at least ten seconds. Or once into your opponent's anus for a full thirty seconds. The penis must be inserted up to the testicles and must remain fully inside your opponent until the whistle is blown. A double whistle means the challenge or attempt is invalid, and you must return to the starting position. Ejaculation results in immediate disqualification.”

“Um, excuse me,” I chased him around the outside of the cage. “How do we forfeit?” The referee just laughed. I supposed ejaculation.

There was a flurry of activity from the crowd. Karl was leading a small but boisterous group who were all yelling and shouting down the rest of the crowd who clearly backed Herr Bareiß. As scared as I felt, if Karl and his crew hadn't been there, drumming up even the smallest amount of support, I would have vaulted over the mesh walls and made a run for it.

Bareiß had me in his sights. A glowing look of recognition passed through blue eyes. A blond eyebrow raised. I felt he was about to say something when the whistle blew. The crowd cheered and I was thrust into some Roman-esque games more at home in a Colosseum than a Berlin sex dungeon. Bareiß edged around the mat, dancing on bare feet, arms up. No one told me this wasn’t a contact sport, so I rested on my years of forced rugby at high school in London and made a running tackle. In a flurry of shocked shouts from the crowd, the man who might be the next Chancellor of Germany fell flat on his back. I was on top, legs straddling his body. What the hell was I supposed to do now? Instinct told me to punch him in the face, but Karl, who’d rushed down to the front, shouted:

“Put your dick in his mouth!”