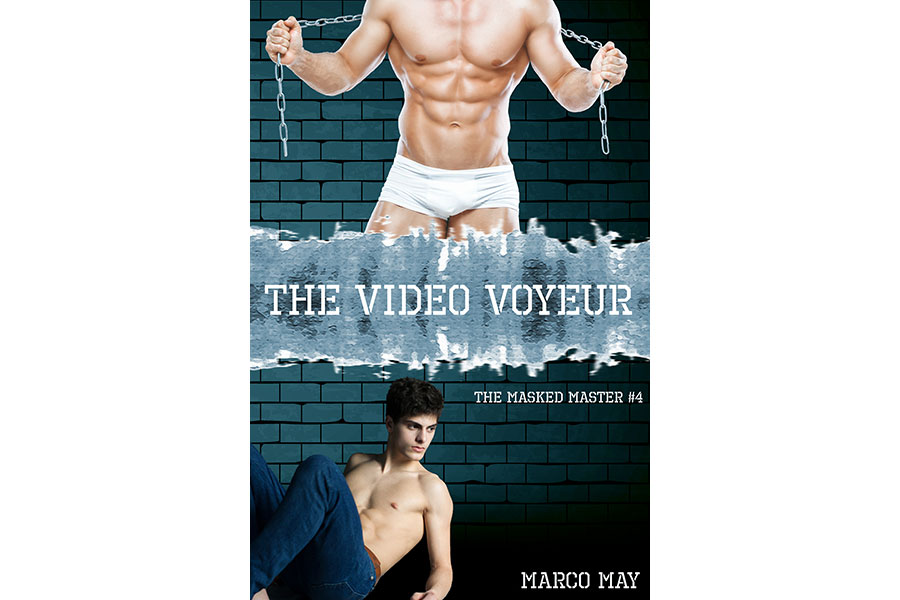 Adrian has only seen Sir on two different nights, but he’s already more taken by him than ever. He still wishes he could see Sir’s masked face, but he hasn’t earned that privilege yet. Besides, it’s all part of Sir’s mysterious charm that continues to intrigue and captivate Adrian more than ever. Maybe there’s even a little crush forming somewhere? Not that Adrian even knows what that’s like since he’s never fallen in love before.

While it’s all mostly physical, Adrian starts wondering if life as just a sub is even good enough. Sure, he’s still a virgin and is in the process of being stretched to better fit Sir’s monster size, so he’ll get to see him regularly for at least another month. But what about becoming Master’s—er, Sir’s slave? For now, Adrian is content, but the thought of enslaving himself isn’t just a coincidence. Of course, whether in person or remote, Sir continues to dominate like Adrian expects him to.

What if, one day, Sir dominates Adrian’s heart?

The Video Voyeur is a 4,500-word short story and part four in a five-part series.

“Adrian?” His deep and butch voice was probably full of hope. It was sexier than my dull, medium-pitch one with the occasional crack.

“Are you available right now?”

“Um…I have a friend over and he’s spending the night, so I can’t.” I tried to mask my frown since I didn’t want Jamal to notice anything. Though, he was busy with the game. So, he probably wouldn’t.

“Okay. I’ll call you soon and see if you’re available next time.”

“Wait!” I found myself in desperation mode because I had no idea when Sir would call. Maybe I could have it both ways: see him for a little bit and not leave Jamal alone for too long.

“Would you be okay with a half-hour?” I tried to act cool in front of Jamal.

“Forty-five minutes?” That was seriously pushing it too.

“One hour is the minimum, take it or leave it.”

“Make it quick.” Sir still didn’t sound angry, but I did wonder if he was annoyed.

I looked at Jamal and attempted a little smile. “Just going to the bathroom right quick.”

He gave me a nod. “Okay.” His focus was solely on Zelda, and I figured he wouldn’t stop playing anytime soon. It was our thing whenever he spent the night, and there was no reason to change that.

I rushed to the bathroom across the hallway and shut the door. I rested my ass on the edge of the sink counter. “Are you there?”

“Here’s the thing. My best friend is staying the night, but we usually go to bed before two. I was wondering if that was too late for you.” I mentally crossed my fingers.

There was a pause that did nothing but make me nervous.

“I know, but, I mean, you really gave me a lot of hope. I thought I’d be a virgin for a very long time, and then you came along and gave me a chance.”

“Why do you doubt yourself so much?”

He’d posed a very good question, and it was something I didn’t always think about. “I’m not hot. I’ve always been a nobody growing up, especially at school. Every time I tried chatting with a guy, he either chatted back and gave me false hopes, or he didn’t pay any attention to me at all.”

“Have you considered taking another picture? Because I can assure you it doesn’t do you any justice. I would know. I’ve seen you twice.”

There was another pause, a longer one. Finally, a gentle sigh on his end. “You should be with your best friend right now. It’s rude to leave him there just to see me.”

I had to admit that I felt guilty to have suggested meeting up with Sir tonight while Jamal was over. The fact that Sir had pointed it out made me appreciate him more.

“When does your friend leave?”

“Are you free tomorrow night?”

“Yeah, I am. For the rest of the weekend, actually.” I was suddenly happy again, and it had made my night.

“Is ten o’clock good for you?”

“Good. I want a longer night with you.”

I smiled and wasn’t sure why I even acted like this over a playmate. “I’d like that…Sir.”

“I told you that you don’t have to call me that outside of my place.”

“Are you still in the bathroom?”

“You don’t have me on speaker, do you?” What an odd question. Paranoid, I supposed.

“Never, Sir. I always have wireless earbuds on me.”

“Good boy. Turn on your camera. Show me your bathroom.”

While he was being unnecessarily paranoid, I didn’t dare to defy him. The fact that he was staying on the phone with me meant a lot. “Yes, Sir.” I did as told, tilting my phone around to capture every angle I could. “You see, Sir? No one but me.”

“Good. Keep your camera on, but don’t expect me to turn mine on.”

“Yes, Sir.” Where was this headed? The intrigue turned into anticipation.

“Are you able to prop your phone up somewhere so that you can be hands-free?”

“I can try, Sir. Can you hold on a minute, please?” I made sure to add a hint of plea to my softening voice to avoid being mistaken as a command.

I scanned everywhere, and the best location was the shower’s built-in soap cubby. Thankfully, the edge protruded a bit, enough to hold the phone since the phone was longer in height than the cubby. I sat on the toilet lid, and the cam captured most of me. I waved until I realized I was a dork, my cheeks feeling flushed.

“Take your clothes off. All of them.”