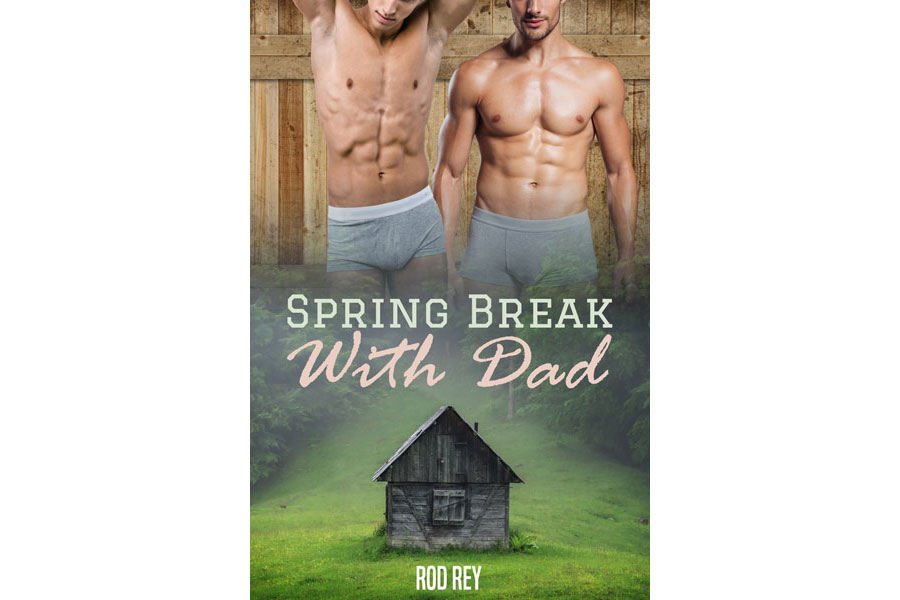 It’s college spring break for nineteen-year-old Jeff, and he’s about to have the ride of his life. But instead of spending the whole week with his jock buddies in the city, he decides to drive to his dad’s little cabin in the middle of nowhere. It’s not just a typical family reunion with Dad. They have some unfinished business to get back to. What started all hot and heavy last New Year’s left them torn, frustrated, and distant…

Until now, that is.

Jeff’s in love with his own dad, and he’ll do anything to prove it. It’s a good thing he retained his butt virginity aside from adult toys of various sizes. There’s only one special man in his life who deserves to be his real first.

After all, Dad is Jeff’s happily ever after.

Spring Break With Dad is a 3,300-word short story.

Deep in the lush woods and through the private gravel road, I finally reached the small, humble cabin and parked my decent-looking car behind Dad’s rusty, red truck on his excuse of a driveway. With my jersey jacket on, I grabbed my travel backpack and stepped out. My heart beat harder than ever the closer I approached the front door. I shivered a little since it still didn’t feel like spring yet, what with being this far north near Lake Superior.

The door opened, and there he was: tall and trim, dark-haired and brown-eyed, tanned from the sun, and as muscled and rugged as ever for a forty-year-old. He’d gotten a buzzcut months ago, his hair now grown out, and his full beard had also grown since his last clean shave. God, he was so handsome that I turned into a molten mess every time I saw him. We looked so much alike, except I was more of a lean jock with a bigger bubble butt, and he was more of a lean lumberjack who towered over me.

“Glad you came, Jeff.” That husky voice, just like mine, but sexier to my ears. A hint of a smile on his face was easy to capture in the dimness. Now that he was getting older, he started resembling Grandpa more, who was also hot in his own right.

“Are you?” I was only partly joking.

Dad looked around the woods, gently pulled me inside, and shut the door. We stood in the living room, away from the small windows. The woodstove served as the only lighting. He pulled me closer to him for a tight hug, giving me his intoxicatingly natural scent of musk. “Of course, I am. I missed you.”

“I missed you too.” I gave him a squeeze. “We have to talk, though.” My heart pounded for a while because it just wasn’t normal for us to be like this.

“I know. I had a feeling you couldn’t let it go. And frankly, neither could I. I think about you every single day, Jeff.”

“Same.” I let go halfway, partially in his arms, enough to look at his serious expression. I gazed into his beautifully brown eyes that drove me nuts in a way I shouldn’t have been feeling. “I can’t help how I feel.” My voice threatened to crack.

“But it happened. It’s too late to go back.”

“Is it?” He looked hopeful.

I gave him a nod and took the hand of his that wasn’t holding me so that I could hold it in mine. I slid my fingers in between his larger ones and toyed with them. “I’ve tried dating other guys, Dad, but it’s useless. Same shit, different guy. You’re the one I want. And don’t tell me you don’t feel the same way because I remember your confession very well.”

“But you meant it.” I knew Dad had meant it when he’d told me himself that he’d been in love with me, the words I’d wanted to hear for so long.

There was a long pause, but he never looked away from me the whole time. He looked like he was trying to face me with courage.

His eyes watered as well, and he pulled me back toward him for the tightest hug ever, bursting into tears. He sobbed like the baby he rarely acted like. “I did mean it. With all my heart. Because I’m a sick man! I’m sick, Jeff, sick!”

“Then so am I.” I loved that Dad showed his emotions with me and not to anyone else, but I needed him to collect himself to make this trip less depressing. This time, I wanted more than what we’d had on New Year’s Eve, and sober too. “Dad, please don’t cry. It’s not like you groomed me or tried anything inappropriate when I was a minor. We’re adults. We’re men. Everything’s consensual.”

He didn’t say another word, just cries of shame.

I let go and took his hand to lead him into his moonlit room while he still cried. It was the only bedroom in the small cabin. The whole place was rustic and country-themed, except more fitting to a single man who didn’t always care about tidiness, especially with random junk lying around. There was a tiny room next to his with nothing but a twin bed and a small nightstand, next to the equally-tiny bathroom, but I knew I wouldn’t be using it during my stay here. I had other plans instead.

I undid Dad’s cowboy-style jeans and got on my knees. I could faint at any second from what I was about to do. My heart beat faster and faster, vibrating through my ears until my face flushed hot. But I’d still do this because I wanted to.

“Jeff, what are you doing?” But he didn’t stop me. He also stopped crying, just sniffling a few times.

I ignored him and pulled his dick out.