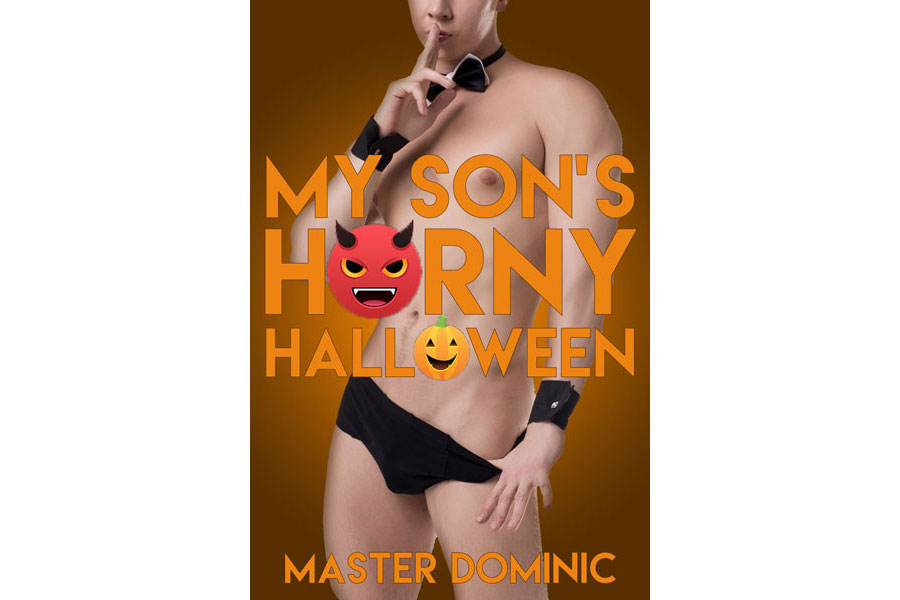 Rich is a proud father with a wife and three grown sons. His youngest son, Ronald, though an adult, is still young in many ways, particularly when it comes to dating and sex.

This all changes on Halloween night, when Ronald, wearing a pair of devil horns, confides to Rich the true source of his hesitation about being with a woman. What begins as a candid dad-son pep-talk soon turns into a hands-on lesson.

As Rich tries to straddle the line between good father and wicked pervert, there’s no telling what might transpire, nor how their relationship might be forever changed as he indulges taboo desires he’s long tried to bury.

“Who says they’d find out? We’d keep this secret. I promise.”

Secret. Fuck, those filthy thoughts are stirring in my head, all the things I want to do with him once I get his clothes off…as I realize soon I’ll be naked with him. For once in my life, I don’t know what the right decision is.

“We should go to my bed then,” I tell him. “If we’re going to…bond in this special new way, it should be where our best bonding time has happened.”

“I always feel safe with you in that bed,” Ronald says. “Plus, it’s a king, so we can sprawl out more.” He has that devilish grin on his face, as he scoots to the edge of the bed and gets to his feet. “Should we strip here?”

He undoes another button on his white shirt, but stops there. He’s blushing. “This feels weird.”

“We don’t have to do anything,” I tell him. “I’m just following along to help you.”

“I don’t mean that. I mean…I’ve imagined this, sometimes. It feels weird that it’s actually happening.”

“That’s why you have to get experience, son,” I tell him. “You have to learn what sort of things stay in your mind, so you can jerk off to them, and what things are worth making real.” The image of his mouth, open around my cock, flashes into my mind, teasing me with what I know can’t be real, even if we both get our cocks out.

“Just take your pants off then, and it will be real. You have nothing to be afraid of with me. Let’s not make a big deal of this, and you’ll see this is just a father teaching his son in a very sensitive area, in a special way that works just for us.”

He shifts his weight to one heel, swaying his hips, undoing the final buttons of his shirt. Easing away the sleeves, he peels the shirt back, but keeps his horns on. The ceiling light shines on his smooth body, hairless but for a thin patch of fine black along his abs. It’s nothing new, what I’m seeing, as he undoes the button on his denim pants, unzips the fly and slips everything down, his dick as erect as mine, sticking out straight.

His pubes are curly bush, thin like the hair along his abs, but his thighs are as smooth as his arms. His balls are thick and globular. Once his pants and boxers are on the ground and he steps out of them, he takes those balls in one hand, and wraps his other around the base of his shaft.

“There, we’re doing it,” he says, tugging at his foreskin. The words are more for himself than for me.

“Not yet,” I say. I strip just as quickly, to keep up my end of the deal. I leave my black T-shirt on. Something about that helps me feel the restraint I know I need, reminds me not to cross the line from demonstration to self-pleasure.

My dick is still hard. It sticks up, rather than out like his. I’m immediately aware of how much bigger mine is than his, with them side by side and erect like this.

I wrap a hand around my dick, once I’ve stepped out of my jeans and boxers. “Now we’re doing it.”