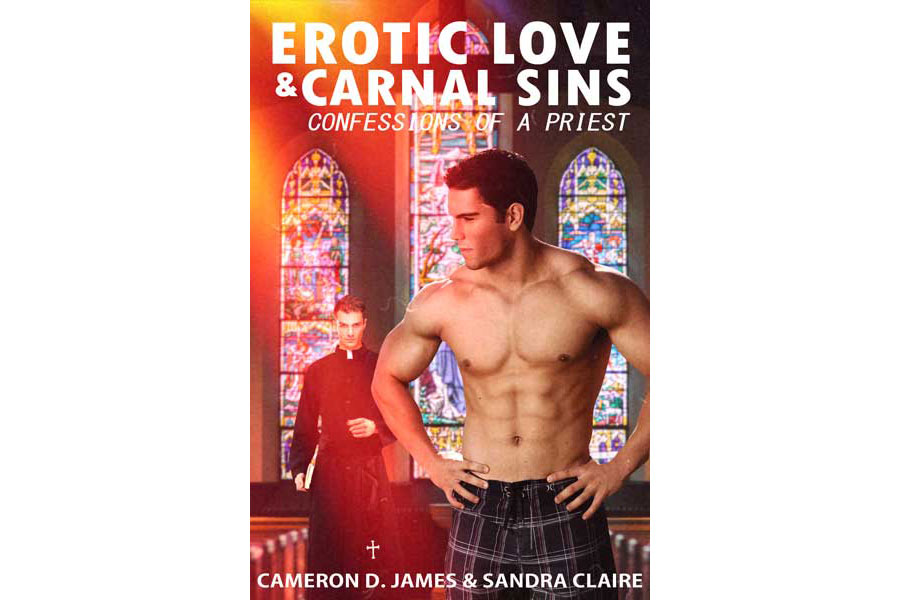 Father Peter has devoted his life to the Roman Catholic Church — but not entirely because he is a man of God.  For him, a life of chastity and piety is the perfect place for a closeted gay man to hide from himself.

Try as he might to live a pure life, his forbidden desires chip away at him, leading him on a path of carnal sins that starts with a simple, anonymous, and discreet online encounter.  But that supposed anonymous encounter, with a man just as closeted as Peter, takes an uncomfortable turn when that same man shows up in confessional, wanting to talk with Peter in person.

I was about to shut off my computer and forget the whole thing, but then the screen flickered and Mark’s webcam feed showed up. And he was naked. And he was exactly as I’d pictured him. At least, his body was — like me, he wasn’t showing his face.

My fear dissipated when it finally sunk in that I was doing this, that this was real, that Mark was naked and already hard and that he couldn’t possibly be a violent homophobe.

I waved my hand awkwardly. “Hi.”

“Hey,” Mark said, his voice sounding deep and masculine, though slightly tinny through my crappy speakers.

“It’s good to finally, well, see you, I guess,” I said. I was so nervous and at a total loss for what to say.

“Yeah,” Mark said. There was tension straining his voice. I could tell he was just as nervous about this whole thing as I was. He had told me he’d never been with a man before — never even shown himself on webcam, either. This was as much a first for him as it was for me.

I leaned back in my leather office chair, still making sure the webcam feed ended at my neck. I ran my hands down from my chest, over my nipples, across my stomach, and ending at the root of my cock. This seemed to have an effect on Mark — he grabbed his dick and started fondling it, holding his heavy balls in one hand and lightly stroking his shaft with the other.

My tumescent cock solidified, growing harder and longer. The head of my cock shone as the skin stretched.

“You’re so fucking hot,” Mark said, his voice sounding deep and husky. He was growing as thick and hard as me. “So much hotter than I imagined.”

“Mmm ... you, too.” I flicked my thumb over the head of my cock, spreading the pearl of precum that had gathered there, making my the crown of my cock wet.

Mark was everything I was drawn to in a man — masculine and thick. His chest had the developed pecs of a man who worked out when he was younger and his chest and torso were broad, but trim. His nipples poked through his thin layer of chest hair, beckoning to me and my mouth. I’d never touched another man, never held one, never kissed one, never licked one. Yet, I had an overwhelming desire to suck those dark nubs and then nibble on them, make them diamond-hard while I stroked his dick — or, even better, as I rode his cock, shoved deep into my ass, my hole stretched to accommodate its girth.

A tremble ran through me as orgasm almost threatened to overtake me. I snapped out of my fantasy and stopped jacking, tensing my core muscles, fighting back against the oncoming eruption. When the sensation abated, I looked back at the screen and at Mark. He was stroking quickly and dripping precum, glistening trails running down his shaft and making his fist wet. The light in his room reflected off his slick cock, illuminating it like some holy relic. My mouth watered again as I thought of getting on my knees between his legs and licking up and down his shaft, lapping up the precum and stimulating his dick with my tongue and mouth. And then I’d open my lips and take him in me, swallowing him down to the root, stimulating and pleasuring his cock until he exploded in my mouth, painting my tongue with his cum and filling me so quick that my only option was to swallow it all down.

I looked at the screen again. Mark was pumping his fist furiously, turning into a blur over the low-quality video feed. Fuck, he was long and thick — I wished I could get that in my ass, that I could sit on him and sink down until he was totally and completely buried in me. I’d never taken a cock before, but I somehow knew I would love having that one inside me.