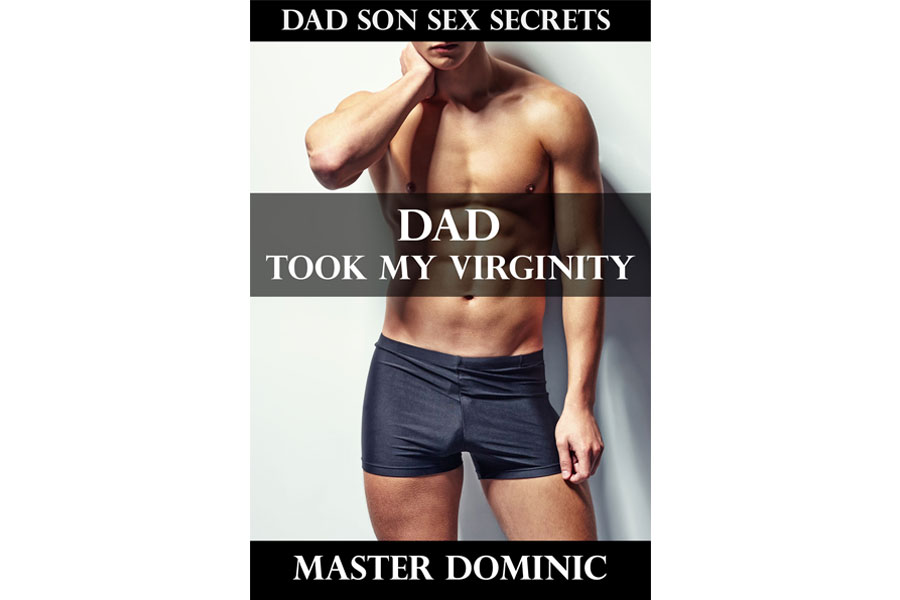 Darren finally works up the courage to explore his gay side and enter the bathhouse. He’s determined to have his first gay sex experience today, no matter what. Walking around in just a towel, he gets nervous and self-conscious, until he finds the pitch-black maze, where he can wander in total darkness, bumping into random men. And it’s in that maze that he finally falls to his knees and does what he’s been aching to do for years. But during a brief moment of speaking, Darren is shocked and horrified to learn that the man he’s servicing is his father — his straight, married father. However, once that line’s been crossed, it’s so tempting to go even further.

Some sort of cockslut mentality took over me and I sucked on that cock like it was the most delicious thing I’d ever tasted — and, really, it was. I wrapped a hand around the base and fondled his balls with my other hand. I loved the taste and feel of this man’s flesh, the way it was tinged with the salt of sweat, the way it was both hard and just a little soft. And the fact that I was in the dark and didn’t even know who this guy was and would never find out made me so fucking horny myself.

He put his hands on my head, wide and masculine, they combed through my hair as he let out a gasp as I continued sucking him. I released his balls and instead moved that hand down my abs to where the towel was tightly cinched around my waist. With a quick flick of my finger, the towel fell to the floor around me and I grasped my own meat in my hand, stroking in time to the rhythm I had going with my mouth.

He seemed to be enjoying it almost as much as me. He started bucking his hips, fucking my mouth, and I absolutely loved it. I felt an immense feeling of satisfaction and completion by totally pleasing this man — not only was I a cockslut, but maybe I was a bit submissive, too.

I gasped and let the man’s cock out of my mouth when I felt a shin bump into my ass.

“Sorry,” a masculine voice behind me muttered, quickly shuffling off.

“No problem, bud,” said the man I was sucking.

A deep and instant chill struck my core. The guy I was sucking off ... his voice was so familiar. It was a voice I knew far too well, a voice I heard everyday. But it couldn’t be ... it couldn’t be my father.

It was one of those voices I just knew — the richness of it, the cadence, the phrasing. It was all exactly like my father. But this ... this wasn’t him. This couldn’t be him. He was married to my mother — he was straight. And faithful.

“Keep going,” the man urged me, still sounding exactly like my father.

I grabbed my towel and didn’t even bother wrapping it around me. I ran my hand along the wall and hurried through the maze, desperate to find the exit so I could just run back to the lockers and get dressed.

I wanted to tell him to leave me alone, but if it was my dad, I didn’t want him to recognize my voice. It was bad enough that I knew what was happening — I didn’t want him to go through the same torment. Finally, as I turned one last corner, I could see light up ahead, enough light for me to let go of the wall and jog out of the maze.

I stopped cold in my tracks. That confirmed it. Fuck.

I hung my head and turned around, quickly tying my towel around me when I realized I was naked. My dad walked up to me, towel dangling in his hand. I looked up at him, taking in a full look of his naked body — he was muscular, tanned, and very hairy, and his cock was just as long and thick as I’d thought in the dark. My mouth watered as I gazed at his cock, and that disturbed me, but also turned me on.

I sucked my father. How many guys could say that.